Meeting With a Being of Heaven [Closed, Zero (Toki)] 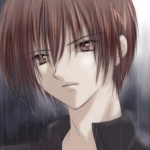 Meeting With a Being of Heaven [Closed, Zero (Toki)]

Kyouhai Harukaze Suzumori
7th Division Barracks and Seiretei
August 3rd, 2413, 11:04 AM
It was a nice summer morning in the Seiretei. The temperature was just perfect today, with the hot sun kept in check by a gentle, cool breeze. Someone with a thermometer would have read the temperature to be around seventy degrees Fahrenheit. Anybody outside today would be perfectly comfortable in the normal Shinigami uniform known as the Shihakusho. Even though the uniform was black, a color that attracts heat, it wouldn't have made anyone uncomfortable today. There were a few high up and far-off cirrus clouds which are almost always found in Soul Society in the sky today, but these were the only clouds around. They actually helped to keep the temperature in check just like the breeze.

On a nice morning like this, a great many of the Seiretei's thousands of Shinigami were out and about. Of course, some were currently on duty, but most were just enjoying the good weather. After all, it was only a few months away from such a time as the weather would deteriorate into rain, hail, and high temperatures in the forties Fahrenheit. The Shinigami, even the most serious ones, knew to take advantage of good weather when it came.

Kyouhai Suzumori, a member of the 7th Division, was most certainly not one of the serious Shinigami. He was so relaxed and laid-back that some people said 'it hurt', so to speak. Today, he was enjoying the good weather like every other Shinigami was, only in a slightly different way. Kyouhai had set up a lawn chair that he got in the World of the Living one time in the middle of the courtyard of the 7th Division Barracks. He was relaxing and enjoying a soda (Dr. Pepper was his favorite), and a snack he'd heard about somewhere in the humans' world called Mexico. The snack was known as a 'quesadilla'. Kyouhai liked them almost as much as a food he'd found in America called a 'sandwich'.

Kyouhai could have just sat in his lawn chair all day and thought about life, if it wasn't for his Zanpaku-to, Kyokuryuu. "Hey, Kyouhai, you even awake?!?!" asked Kyokuryuu mentally. Kyokuryuu was yelling inside Kyouhai's brain, if such a thing was even possible. Kyouhai flinched a little at the sudden loudness before responding to his Zanpaku-to in the form of a thought. "Yeah, I'm here, Kyokuryuu... What do you want?" asked Kyouhai, trying to sound tired and annoyed in his thoughts. "I think you should get up and do something. Sitting around all day eating snacks and drinking soda was never good for anyone and I think you're hurting yourself." said Kyokuryuu. He was all up-tight and strict with Kyouhai, just like he always was. "I'll walk around for a few, but only because you probably won't shut up unless I do." thought Kyouhai to his Zanpaku-to.

With that, Kyouhai got up from his lawn chair. He screwed the cap back on his two-liter bottle of Dr. Pepper and took it with him. Kyouhai then walked toward the gates of his Division's barracks, which, unlike last time he had gone out for a stroll around the Seiretei, were wide open. Kyouhai walked out and then looked in both directions. Briefly, he looked down the way that he had taken a few weeks ago, when he went for a stroll on that horribly hot day in the early morning. Kyouhai decided not to go that way. That time, he had run into some very weird and rather dangerous events. Kyouhai turned the opposite way and began his stroll, hoping that nothing crazy or weird happened this time.