Black spiky hair, his school uniform with Karakura Highschool's badge that was dressed rather messily with an orange t-shirt underneath it, and of course, he was out from his school after the lessons were over. Most people would probably know him, as Touma Yuudeshi. Most likely always blaming his bad luck whenever troubles that he had pit himself into, but he just went along with his usual life as a normal person. Holding his bag behind his bag, his expression was nevertheless, normal. His steps are always advancing foward back to his house after school, though he might plan to head to the supermarket before settling things himself, since he needed to get a few more foods after the things in his fridge were long expired, crushed his cellphone and so far for today, he sat on a seat and caught himself stuck on a bubblegum underneath him. His head faced upwards as he was walking normally, and only his usual line was heard, "Such misfortune.."

It was a couple of years later after the discovery of his powers, he realises it did nothing but a mere bad luck to his usual, ordinary life as a human being, very dissapointing since such 'power' would almost run useless every time he brings it with him, and hardly could find any useful thing out of it. If he had some sort of telekinesis or any other abilities than just 'this', it would've made his life flow much easier, but even Touma does have these abilities, his hands would just throughoutly cancel out his own powers from being used. Is this a fortune or a misfortune? He doesn't really know how his life moves with a pair of hands that does absolutely nothing but bad lucks all the time. But supermarket, here he comes. 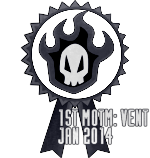 CRACK. Sound of a collection of eggs that fell and simply smashed itself into pieces as its remainings spilt out from its shell. The spiky black-haired male kneeled down to the floor, his expression was clearly in an agony after he reached out for a pack of eggs that was on sale, and the moment he took ahold of it, moved it out and stepped backwards, Touma knocked himself against a stranger and let loose of his hand, eventually falling slowly and smashing itself against the agony of Touma Yuudeshi. He shouted clearly and loudly within the supermarket, in agony, of course, "SUCH MISFORTUNE!!!"

The one he knocked into, was Kyle Light, or for short, Kai, the stranger whom he knocked against earlier ago and caused his misfortune to act up. Touma was rather.. sad, after he was able to take the last pack of eggs and ever thought he was fortunate enough, he dropped it down to its final moments when it was on sale. His source of protein, was all but waste of effort to run back here to buy something as important as this for a poor person like him, although coming from a wealthy and famous family like the Yuudeshi Family, Touma lives alone in a cheap apartment and away from his parent's usual place, and now living a rather misfortunate life. Despite born from a wealthy family, he lives in a broke apartment with a little-to-no savings where he comes in and out from the school like any other 'normal' people would. His head shifted to Kai, eventually back to the pile of broken eggs before he stood up and moved away, wihout a word or any need to say something.

Like usual, he picked out some packed breads for tonight and tomorrow's, since he needs food to survive, especially picking out a bottle of water before his leave from the supermarket. Though, Touma's expressions was still rather.. in a maximum agony after what had happened. He opened his wallet and gave whatever's left of his cash to pay for the smashed eggs and the cheap meals he bought. His head nodded downwards, sighing for his own misfortune, "Why is this even happening to me every single time? Especially knocking into some random guy and took apart my final source of proteins, now my monthly savings are gone. Such misfortune.."

Packing his stuff into the plastic bag, and the second he lifted it and only took a couple of steps out from the supermarket, his bag bursted a hole due to the weight of the items and the durability of the plastic bag caused the stuffs within it to fall to the ground. His face was nevertheless entertaining, an expression of another agony and somehow a gap with his mouth slightly open. He didn't look down, but kneeling down and picking the things back up. Certainly, this is some serious misfortune, is it?

All in a great plague where a legend says that there were many great heroes that wield the power within the right hand of the current owner, Touma Yuudeshi. Some implies that it was a gift and a blessing from the God itself if you ever receive the power that once ruled over the wars wielded by the heroes, some says it is a curse that ruins your life no matter how much potential it holds as it wields the power to go against the law in heaven. The power to defy God's powers, exorcists demons and hollows, as well as going against the angels of the heaven itself, yes, Imagine Breaker, takes out every notable supernatural occurances around him, whether it is beyond the knowledge of human mind and technology, superior above all or invincible to the human touch. These things were needless to say, 'negateable' by the likes of his hands to allow these forms of supernatural to regain its former glory by erasing what's left of being created by the hands of these unknown beings, whoever that wields the power akin to the supernatural, ability users, for what Touma speculates and identifies these people are. These thoughts rang about his own unfortunate life, affecting by his unknown power that is beyond the reason of one can even provide for his hands, something that removes his good lucks and created something more joyful than just a bad life, a warm heart of his that being a willing person to help wihout noting his own life to throw away for the sake of others. Whether he is a human, a shinigami, a yuudeshi, all of these status are none of use to him if they can't save lives that were meant to be saved. Family is all he had to look after, and being an independant sort, he uses none of his family's resources despite their well-known name for being rich and famous throughout the earth, even the sound of its name would make the weak tremble in fear.

A warm hand reached out to the misfortunate male, Touma, and this man was known as Kyle Light, a man who he ran into when he was picking up a cart of eggs within the supermarket. He would've gotten up himself and head back home otherwise if he didn't met this guy in the first place. At first, his anxiety took a short turn in reaching his hand out to stand up, but nonetheless, a sincere smile took into an expression on his face before he gripped against the male's hand and stood up, "Ah.. Thanks.. Mister?"

It wasn't nothing much, really, since from the first day of his life, bad lucks were thrown at him like a barrage of stones wihout minding its own business, throwing him down to the world of agony and pain from misfortunes of his own life. A face of a poor kid as if he had faced many hardships in the past and was never brought a good luck with him before. Going through the fires of hell and raging sea of the pacific ocean, it is certainly, indeed the worst day he can go by each and every single day wihout even a single second of a good luck stopping by and saying 'Hello' to him with a smile. Imagine Breaker.. Such a misfortunate power to have if you were ever the wielder of it, and even with all its goodness and merits out of it, your life is going to be part of the hell itself, pre-described under Touma's own misfortunate life, again and again, a nightmare. His arms wrapped around the fallen goods and his last piece of plastic bag, hugging it around his front as if he wouldn't want to let them go, since he ran out of extras, letting it break again would be the worst case scenario. "No, its fine. Nothing's really bothering me as of now, since i'm pretty much got 'used' to these kind of incidents for quite some time."

Touma wouldn't want to tap into a reminder about his misfortunate issues, since he doesn't really put on much trust to this 'guy', although he seemed as a pretty nice guy who lended a hand out for him, but its better to be cautious about telling out his imagine breaker since he wouldn't want a wave of scientists and researches running for his genes and forcing him into an experiment for a scientific explaination about Imagine Breaker. Even the greatest of the geniuses can barely even point out what 'Imagine Breaker' is that resides within the blood vessels of Touma in his pair of hands. For him, being alive in such a beautiful world was more than enough for him. He may be a misfortunate person himself, but it means more than anything than just being.. plain bad luck in life. His hand reached out to the male, keeping the very smile on his face only to say out his name wihout hesitation, "Touma, Touma Yuudeshi, and what is your name, mister?"