Hunt of the Ruby Rose (private for now) 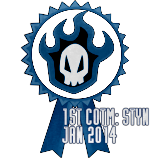 Re: Hunt of the Ruby Rose (private for now)

An armored form wielding a giant two handed sword larger then he was rushed one of his dark hounds down below. It would seem that his time alone with Ruby Rose was at an end. Styn had hardly expected a response team from Vanguard to show up so soon. As the shadow beast jumped backward it was pierced through with a narrow blue beam of light that obliterated the summoning's head in an instant. Two so far, one melee one ranged.

Glancing down at the second fire seared hole that had been inflicted upon the Karakura forest Styn cursed. Chika Usagi was no where to be seen. Since the Black Inferno Blast wouldn't have been enough to completely incinerate the girl, he had to face the realization that she had managed to allude him. Synthia was going to be doing cartwheels when she heard the news. Nothing quite like Styn looking like an idiot to put the acting duchess of the First Circle in a great mood.

Another flash of blue light lanced outward, this time targeting Styn himself. Only his enhanced Akuma Kyodo saved him from acquiring his own hole. Lifting his hands above his head the Demon Knight pulled himself down toward the laser's point of origin. A swirl of smoke later found him over and behind the crouching form of the sniper. It seemed to be a woman this time, decked out in vanguard riot gear so he didn't hold back. Locking his hands together, Styn brought the joined fist down in an overhanded hammer blow to the back of the woman's helmet.

Strength wasn't exactly his chief attribute, but he had more then enough to rattle the brain of an armored human. The helmet didn't even crack, it was made of good material. However, the raw kinetic force behind the strike was enough to send her face first seven inches into the moist earth and off to lala land. In the meantime her partner had managed to draw the ire of the rest of Styn's pack.

Without ranged support the human was hard pressed to land a blow on the nimble hounds. He did manage to sever a few tentacles, but there was only so much he could do with such a large and unwieldy weapon. First the swordsman lost mobility as a barrage of shadow tendrils finally managed to snag a leg. Before he could move to cut this attachment his arm was similarly captured. Individually the shadow beasts would not have been able to match the powerful human's suit enhanced muscle, but together they soon had him bound tightly.

Styn wasn't interested in killing the man. He wouldn't have long before an entire garrison descended on his location. He had been too flashy in trying to acquire Ruby Rose. Then again it wasn't like he had started it. Her initial explosion had most likely been responsible for drawing out a Vanguard response. One secret experiment was not worth declaring war on Karakura. Shadow Fall would just have to wait on this one. Hopefully by the next time the girl was sighted it would be below Styn's area of responsibility.

An act of will brought on a rush of energy. The Demon Knight took a moment to savor the surge of Za Koa. His pulse had been pounding during the battle, he had found himself enjoying himself despite himself. Now that it was over he was left feeling vaguely unsatisfied. Lifting his right hand Styn focused on the lines of reality that made up physical space. He had come a long way since doing this took effort, but sometimes it was nice to go ever all the steps. Unlike before for example, he hardly needed a days worth of familiarity to craft as table portal.

To an outside observer he would seem to be standing there imperiously with a hand thrust straight forward, palm curled as if seizing something invisible. If that same person were especially sensitive to the flow of energy, they might notice that the air in front of the demon shimmered and twisted. It was as if the world was fighting the flux of power that reached out to seize every piece of matter in a flat circle of space ten feet in diameter.

It was a multistage process. First he identified the space he was in. Then he seized that ten foot circle of area directly in front of him, but thinner then a hair. Next he reached out his mind to an area in the demon world where hoped that Synthia wasn't currently waiting. This next part was probably the most complex as it involved bypassing the multitude of security checks that normally prevented connection to the demon world. Styn wasn't a member of the First Circle just for show however and mostly had the entire process on muscle memory.

In the end there was a crystal clear moment when he knew everything was connected. The mental bridge between realities was firmly established. All that remained was to tear and rend the laws of nature to fit his established image. Styn's hand clawed at the air, thrusting into the disturbance he had spent a few seconds generating directly before him. His fingers seemed to find purchase and grip onto something. With a backward pull he tore a hole in reality, a portal into the demon world was born.

There was something meditative about really thinking out each step. He'd leave the two Vanguard Sergeants alone. In another moment or two his creatures would fade back into the shadow stuff of their creation. The man would be free to run to the aid of his partner and get the obvious concussion treated. There would be some reports filed and maybe one day someone would sit down and go over the visual data, try to match his face to a list of known demon operatives perhaps. For now though it was time to head back, mission failure or not, things had grown to hot in the human world for now.

The girl was young still and there was so much time still. Styn was sure that it was only a matter of time before Chika Usagi ended up in the wrong place at the wrong time. Her luck couldn't last forever. With a last look at the downed human woman he stepped through the rift and it closed smoothly behind him with a soft whisk of air. You win this round Ruby Rose.

Re: Hunt of the Ruby Rose (private for now)