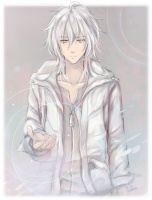 In the gloom of the unlit room where very few dared to enter the the Monsuta Co-leader sat. Her vague figure was covered by the high backed chair which she was seated in, the chair itself was something that appeared to have been made in the eighteenth century as did the large desk in front of her. In the woman's hands were a few books, multiple procedures she had written down about Vizard creation and the many forms of hollowfication, some of which she had devised herself but she was feeling quite bored just reading over things she already knew. This wasn't acceptable, she seemed to shoot up with the speed of a hungry cheetah while doing so se placed the book down in one swift movement.

She silently made her way over to the door of the room she was in and slammed her fist on the harder oak, it was quite difficult for her to get the balance of force right considering she could easily break the door with her pinky but made the conscious effect of hardening the doors molecules to handle her powerful blows. It took less than a minute for the startled servant to open the door and let her out. A she took off in her chosen direction and could sense the servant falling into step behind her. The winding hallways seemed like a labyrinth for the untrained person but Haruka had only one place in mind, the dungeons. Why? Well that is easy to explain as it is as simple as one of the recent skirmishes lead to the capture of a simple Vizard Corps footsoldier who was taken alive, she needed that information from him such a bases, missions and everything. What would please others more than finding their enemies to destroy them? Wasn't that the Monsuta's goal to destroy the Vizard Corps? Anyway while lost in thought she had arrived at the cell which housed the target whom would be her "entertainment" for the next hour as her more sinister side revealed itself.

Haruka entered the cell, hearing the sound of the bolt be set into place by her little follower, she would look at the little soldier hanging limp from the chains that were attached to the ceiling, right now they were the only thing keeping him upright as he swung back and forth ever so lightly. As she approached he stirred and made a small noise of whimpering, when within arms reach she reached out and grabbed his chin, lifting it up so he could see her gorgeous face which looked like an angels, "Good day, how are you? Is the punishment to hard on you, I can make it stop if you tell me the information I want, what do you say? I might even sweeten the deal... she said and as she finished her angelic voice trailed off and she redirected his eyes to see her well endowed chest.

Well, what happened next just light a bomb under his legs, he looked her right in the eye and spat directly at her face. Fuck You, you Monsuta Whore! he shouted although he felt the wrath of the woman I the form of her hand giving him a full force bitch slap to his face. Not only did he call the co-leader of the Monsuta a whore he spat in her face which also landed in her hair, she loved her hair and thi little prick crossed the line. She grabbed him and began strangling him, he fought valiantly as he tried to peel her hand away from his throat in order to breathe but she didn't let go untill he passed out, bring careful not to kill him. She stood up before walking back out the door to go shower, he has angered the wrong woman from that act of defiance.


Word Count: 642. If necessary I can increase the word count and make changes to it.

An I able to claim this character? I know Kade was going to claim her but he never posted his second attempt and since it wa a month old I just assumed I could attempt to claim her.

Okay thanks Hellion. Might I make a second RP sample to rectify my other mistakes?

1, 2
Permissions in this forum:
You cannot reply to topics in this forum
Who is online?
In total there are 16 users online :: 0 Registered, 0 Hidden and 16 Guests