Open Door's: The Beginning of My Journey 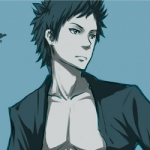 Open Door's: The Beginning of My Journey

Kenta breathed in a gulp of air as he looked over the academy residing in a bath of sunlight. It was to be his first day, and the beginning of the rest of his existence. Although excited and ready to begin his training and studies, he had absolutely no idea where to go. There was no clear outline of the campus and he was new to it. He had an expression of embarrassment as he figured he should already know where to go.
He looked around for someone to help him find his way so he could begin to harbor his power. There didn't seem to be anyone around and so he figured he would simply enter, walk around and ask passer by's for help. Hopefully someone would pass by soon, because Kenta was not interested in wasting even one more second on locating an adequate instructor. He was ready as ever and eager to begin his training.

Intro (Can skip if you want.)

A soft wind blew through the the Academy's foyer, white hair being dragged and gently tossed about as its owner looked down at his hands. His right arm, made of flesh and bone, the scars traced along its wrist that would never go away. His gaze then turned to his left arm, if you could call it that. His left arm had been red and darkened for two years now, with great digits that were as long as his right forearm. Moving the digits about, Kuro gently chuckled, before letting them fall down at his sides once again. Kuro Okami.

Kuro Okami, the 13th captain of the Thirteen Court Guard Squads. He was known for two things. First, for being an absolute goofball. There was no other captain in the history of the court with a shorter attention span or more hyperactive tendencies. Despite this reputation... he was also known for his care of his subordinates. Those within his squad knew the tale of their Captain well, a man whose shattered heart had been beaten and tread upon until the crimson blood of its emotion stained the shadow beneath it.

Outside of that, however, he was usually unnoticed. Ironic, in a way, given that the Captain knew more about the inner workings of the Gotei then even the Central 46, and carried the potential of a master assassin within him.

Why am I here... hmm? Kuro was shaken out of his thoughts by the appearance of another man, hearing him... ask for help? "Huh? You want what from me now? Kelp? Sorry, I haven't got any of that!" The man laughed, though perhaps it was odd in this context to call him a man. After all, he was a full head shorter than the person that had called out to him. Wearing his white captain's haori, it was quite obvious what his position in the world was. ...Oh... that's right... I was forced to stay home for... some reason... Kuro's slightly shattered thought process recovered the reason why he was wearing this gaudy thing. Then what the man said clicked.

"Oh! You were asking for help! Haha, my bad." Kuro laughed aloud, though something seemed... slightly off about it. "Help with what? Your pancake making skills? Gaming? Swordsmanship? Shadowtag?" Kuro's hyperactive personality had engaged, and he was now bombarding the poor neonate with questions. He had captured Kuro interest... the same way... that someone else had caught his interest, once before..........

Kenta was feeling down on his spirits as people passed by without offering guidance. He saw a man, in the slight distance approaching and called out to him. It was not long before he realized he was shouting at the captain of the 13th squad, Kiro Okami. Instantly he was filled with great anticipation as he had heard tales and murmurs of the captains accolades. Having never seen him before though, he was taken aback by his appearance. The numbers on his arm left Kenta rather puzzled. Now was a good a time as any, Kenta figured, to ask for help as the captain was approaching him. "Um, yes, i need some guidance actually. It's my first day here at the academy and truthfully i have no idea where to go. Would you mind helping me along captain?". Kenta was nervous as he was not sure of what to refer to the captain as. All he knew at this point is that he could be in no greater hands. He knew that his journey was starting off on the best foot possible.

"Huh…?" The slightly immature Captain let out in reply, his eyes blinking as he looked at the man who had implored him for assistance. Swaying slightly on his feet, Kuro tilted his head from side to side as he tried to process the request he had just been given. "...No problem… I don't have anything better to do…" The beginning was strong, but he trailed off into a murmur by the second line, before he ended up looking into the man's face.

"...hahaha… that's funny, you remind me of me…" Kuro said, before he turned around, slowly beginning to walk. "You better hope that stops, though… I hold the record… for most time held in the Academy of any Shinigami…" Kuro said, his laugh returning once again, his eyes slightly closing as he couldn't help but giggle. Finally, he stopped in front of a training hall, slowly reaching an arm around his shoulder, gripping his Haori as he quickly drew it off of his body. This action revealed the dual swords that he carried with him wherever he went, with their black hilts blending in against his Shinigami's uniform.

"Captain…? Kuro's my name… Though… someone like… uggh…" Kuro stopped for a moment, his eyes blurring as he leaned forwards, his teeth clenching as he gripped his head.You IDIOT! RESIST! STOP BEING SO WEAK! KYEEAHHAHAHAHHA! A grating voice inside of his head yelled shrilly, causing a strange expression to cross Kuro's face before he straightened his spine. ...Piero... "Now then, do you have your Zanpakutō?" Kuro seemed to have become unfazed, although… he never finished the sentence he had begun.

"uh...yes i do in fact have my Zanpakutō..", said Kenta in a low bewildered voice. He noticed the captain was acting rather strange and became slightly concerned. "Are you alright captain?". Kenta almost didnt want answer to that question. He had heard stories of the captains odd behavior and demeanor but this was weirder than he expected. 'Be careful what you wish for' is that phrase that came to mind as Kenta walked towards the training hall. In an eerie way the captains behavior reminded him of Judas in the days before he lost contact with him. Before.....no, Kenta didn't want his mind to travel there. It's been a long time since he had thought about his parents killing. He decided to shake his concerned feeling and realize that he was with a captain. There was no reasonable way for him to justify being defensive with a captain of the Gotei 13. Kenta entered the training hall willing and able to be strengthened by the teachings of Kuro Okami.