Trying to work things out.

Trying to work things out. 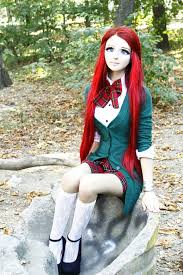 namine speaking
The other colors are voices in her head.

Namine slowly walked through central karakura city and her mind was woundring. The voice in her head was supposed to be gone? or thats what the one person said anyway. She had no idea why they would say such a thing. the voice was still there only this time another voice was in the mix for some reason. Okay si its supposed to be gone but who are you? We are a part of you after all we do so need to get you to be a little bit more restrained. If you were maybe you would not be in the situation you are in now. Namine was conefused and as she walked she soon found that she had walked into an vacant part of the area. She had no idea how she had got there but she did know that she had to work out her thoughts. Ohhh yess we do so love to do the random things. After all you can not have any fun if you do not do something a little wild and crazy. After all There are many things you can not do if you do not just jump in.

Karakura Central was bustling as always, still in recovery Gin was forced to spend some time in the city. He had been quite annoyed at the recent happenings, the defeat at the hands of Vanyel still dug into his mind. The boy had made it a goal now to aim to kill the psychopath which had almost killed him, that last attack was much stronger than Sprenger. He had been trying to find a way to enhance himself beyond normal capabilities quickly, at one point he considered Phantom Tech although decided to forgo it.

So the teenager was forced to spend a week or so here to recover, senior members of the Vandenreich insisted on it. So here he was, the soldat was dressed as he normally was, a white coat with standard Vandenreich attire on. The Vandenreich soldier had been thinking about that, the name of the organisation from which he aligned with. Why was it the "Invisible Empire" it was now a well known fact the organisation existed as a faction now. The teenage and youthful boy could consider it but the details had seemed unimportant to him.

After visiting his family once more he was on his way back home to a small apartment he had rented for his little extension in time, on his way back though he sensed a reiatsu he didn't intend to sense, it was very faint of course since in such a large city with so many beings who now had reiatsu it made it very hard to catch. That was if it wasn't such a strange signature, he deduced it was Quincy? As far as he knew there were no other Quincy in Karakura Central. This could be interesting to the bored teenager who wanted nothing more than to leave and get back to the cold wasteland called Antarctica.

So without a second to waste he began to make his way towards the position of a young woman who he could sense was a Quincy. walking behind her but appearing to be apart of the crowd the Quincy would wait for the opportunity to approach the woman before coming up and touching her shoulder. "Hello there" came the casual tone as he waited for her response. Finally something interesting.

Namine could not help but blink as she heard the third voice. and she felt something touch her shoulder as well. Though this time as she turned to look to where the third voice came from and she could not help but smile. Ohh hello. How are you tonight? She said as she slowly began to curtsy to the one before her. She had no idea who this person was but she was rather happy that someone that was actually there was talking to her. She slowly closed her eyes and opened them yet again as she looked to Gin. I am Namine. Sorry I had a lot on my mind and I just realized that I forgot to say my name. Yes forgetting to say your name is a poor judge of possibilities. Then again at least you did recall to say them at least. so that is good on you girl good on you.

Yea we can have proublems remembering things like that. But at least there is always something to remind us. Namine would end up nodding her head as the voices spoke. She actually ended up agreeing with them and she had no idea how she must look to the person she was talking to. She would be nodding her head yes as if someone asked her a question that had to be answered. Slowly shakeing her head to silence the voices for the time being she could not help but ask a few questions. What brings you out here? I kinda wondered out this way when my thoughts kind of ran away with me. I tend to wounder around to random places when I am lost in thought.

The truth was she had no idea where she was and it almost scared her but I the end she knew that there had to be a way to overcome this. She had been lost before and her nature to explore things she possibly should not explore always ended up helping her in the end. Though as the time passed she could not help but wounder if the voices in her head would be more harm then good but for the time being she wanted to focus on the person who was standing before her.
___________________________________________________________________
Ohh that looks lovely.~
Coding and Graphic In Template By:
[THEFROST] and Lilith

He looked at the woman as she did a curtsy, a very strange gesture during this time period. If the Quincy and his new acquaintance had met somewhere from 600-800 years ago it would seem less strange but the young man let the whole things slide. Why make petty thoughts of a person for doing what they do. So the male simply watched as she did her thing, he looked at her a little confused when he heard her say she forgot to say her name.

At first he shrugged it off although the girl only got stranger when she made a nodding motion as if replying to something.... it wasn't anything he was saying though. This made the boy worry a little although he wondered if he was just being stupid. Then again, the quincy was a highly perceptive person and wondered about her mental health. Especially when she brought up the fact she tended to wander around when lost in thought. Well he tended to pace occasionally when in thought although never to random places and never did he get himself in a location without his knowledge.

The soldat thought about her questions as she asked them, "I am with a little band of Quincy. I almost died and got told to remain here for a bit to recover" of course the words were said casual as though the fact that he almost died had no real effect on him which was true now that that bitter fear had been replaced by a grudge against the would-be-killer.

Namine looked to him as she blinked. When he mentioned the quincy name her ears seemed to perk up. Soon after she could tell this other person was a quincy to. She was more focused on the things going on with her that it slipped her mind to even check. Ohhh so you are quincy to. I should have been able to tell but I have had way to many things on my mind and my plate of things I need to do. I was planning on talking to the quincy about something that happened not to long ago. Though I do not fuly understand all that happened. I was with a shinigami and we were talking about things when hollow just seemed to keep coming and coming. The shinigami helped me and said the oddest thing. Something about some strange seal I think and that some new arrancar is running around now. So I figured I should infor the quincy about the new threat. Though I honestly do not know if it is a big one or not. I was out cold during it. Namine slowly nods her head a sshe smiled. She figured what she said would give the jist of what she wanted to say. She decided to leave the bigger stuff out for now.

Ohhh come on lass tell the fellow about us.. After all we are ment to help you and in helping you we should be known otherwise people may think your crazy. Wouldn't people consider talking to yourself crazy? and hearing little people inside your brain space proubly would not help that any. Would you two shut up I am trying to talk to someone and I really do not need you pestering me about that now. And besides if I said anything about that its obvious I would be put in something for mental help or something that would stop me from being able to do my duty's as a quincy. After letting off a light sigh she looked to the person she was talking to. Is there anyway I can help you? I mean after all if you almost died you should proubly go to the infirmary or something right?

Namine looked to the person she had been talking to and then quickly looked at the sky. It had seem to have gotten quite late and she figured she should get on her way. Well as nice as our talk is I really should po ssibly be going. I do hope you get better soon. She offered a polite curtsy and a smile as she slowly turned to start walking away. You really should not turn your back on this person. We do not know if we can trust them. No we do not know it but why worry about it now? after all with it being as possibly late as it is we really should get everything done we set out to do. Is that not so? Namine could not help but nod her head as she looked to the sky.