Artist: N/A - Song: N/A - Word Count: N/A
Still, Kain doesn't know why he came back here still the new Captain Commander called him since the vizard was rejected by the Seireitei all those years ago. The incident that changed him and what the Soul society did to his best friend all those many years and the demon guy who saved his life that moment was just brewing in his mind. But still, He forgave them after the captain commander convinced the higher members that was attempt on Kain's life was a tragedy. Idiots trying to make a name for themselves still it doesn't change the fact that the woman who gave him quincy and also gave him doggy ears is gone. Really, He didn't care hoping to put the past behind him at last behind him but one thing was still bothering him the thought of that Shinigami Ichigo Kurosaki. But the former hero forgot his way and he needed to find it again still hoping the Seireitei could help him again. It was a long walk from the Rukongai district still the good walk gave him some time to think of his objectives and his hero lifestyle but one thing. Ichigo Kurosaki was forgiven even after obtaining the vizard powers and still they try to kill him and his friend because they thought of him as a threat. After some major thought, Kain was going to go through with this and try to become the hero that was once was but the road getting back there. He thought was going to be a hard one still meeting with the Soul Society was going a major benefit to him. Maybe Central 46 those bastards will do something out of their jurisdiction that would led to the death of another innocent shinigami just to maintain their order. Kain had an idea in plan in place still a lot of stuff needed to happen before the vizard hero can put it to fruition.

Kain was walking around the Seireitei looking for his destination it was unclear of why somebody called him back here to this place. But he was here still somebody was following him hoping that he would change directions but the stranger was still following him and didn't know why. He started running the other way then the vizard until it was a whole group of shinigami following him wondering why this was happening again.

Back then the vizard wasn't enough to handle situations which could get him in the trouble, Kain felt different like that he handle these strangers. Wondering why they were following maybe they didn't like vizards too much they wanted him to leave the grounds. He started confronting the strangers wondering what they wanted they made their intentions clear about remaking the Soul society clean of all vizards and hollow freaks really about starting a revolution. He didn't like that people trying to make a name themselves and doing it at someone's pain and expense. Kain was going to teach these people a good lesson.....
Template By: [THEFROST] 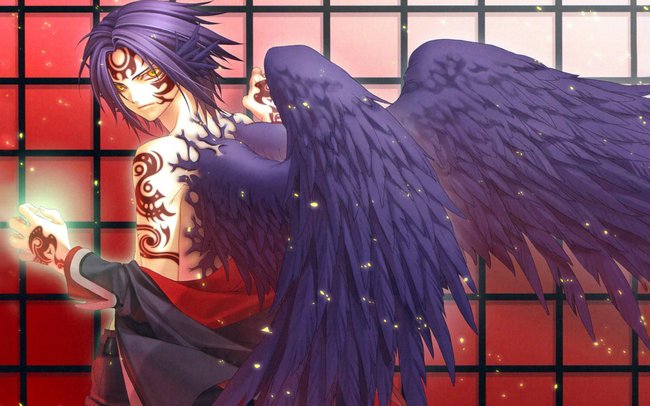 Spoiler:
OOC NOTE: Before you read this post Kade, read this. This will be my one and only second chance I'm giving you to RP with me. No more of this making up shit on the fly, or powerplaying/metagaming/godmodding. like in the other thread. I am not saying that you are doing all three of these, I am simply listing them as a reference. If you do any of these, I will leave this thread. That is all.

The silent footsteps of Henrex's feet shuffled as he walked around the Seireitei. He wasn't exactly patrolling, but he was making sure that there wasn't any trouble. A bit of a self-induced little mission of his. He wanted his home to be safe. Dying the first time motivated Henrex to keep living, and keep his new home safe. The single revealed eye of Henrex soon shifted around, scanning the area even more. He wasn't taking any chances. With a single hand moving towards his Zanpakutō, Henrex detected something. Not with his eyes, but with his senses. A dual typed spiritual pressure hit him like a tidal wave.

The feet of Henrex Astillon quickly started moving, still silent as he ran towards the area where he felt the spiritual pressure from before. His hand instantly went to the under the tsuba of his sword, using his left thumb to quickly flick the sword's blade out by around three to five inches. He wasn't taking any chances this time. After the events with Stefan Soan, he couldn't trust anyone with even the slightest bit of Hollow within them, nor could he trust anyone's spiritual pressure that just seemed to appear out of nowhere.

However, there were more spiritual pressures there. Unseated Shinigami. Damn it. He recognized the spiritual pressures of these unseated Shinigami. These Shinigami hated Vizards and wanted to wipe they from the world. Well, Henrex wouldn't let them just kill the Vizard who seemed to be just wandering around the Seireitei. The sword that had previously only been unsheathed by a few inches soon was fully exposed to the cold midnight air, and the sound of the blade being unsheathed echoed throughout the area.

Unsealing his wings, the two massive black, leathery objects on his back spread wide as he leaped into the air. He didn't have time for modesty or hiding himself. He wasn't going to allow the Shinigami to attack the Vizard. Flash Stepping past the barrier, Henrex soared overheard, before speeding towards the ground. Keeping his sword ready, the body of Henrex Astillon slammed into the ground on his feet, before a large burst of spiritual energy would sprout from his body as an aura, and the black eyes of Henrex would glow silver. Altering his eye color using his spiritual energy would make him seem much more menacing to these Shinigami.

Spinning his sword in an arc around him, an aura of black and purple spiritual energy would flow from the blade. Henrex, who had been crouched down due to his landed, soon rose from his position, pointing his sword at the unseated Shinigami who were attempting to attack this Vizard. Glaring at them, Henrex would shout out a single, authority filled command.

His now returned black eyes stared daggers at the Shinigami attempting to attack the Vizard. It wasn't right for Shinigami to attack someone of their own race simply because they had the energy of a Hollow flowing through them. In fact, Henrex welcomed Vizards to the Seireitei. He considered them like him. They were scarred from the damage that their Hollow could have done, and more. Henrex would not allow this Vizard to be harmed. If these Shinigami had a problem with it, they would fight him.

Artist: N/A - Song: N/A - Word Count: N/A
This wasn't going to be pretty, Kain wasn't ready for a fight of this magnitude but really why should he wait thinking more about the quincy powers that he has now. He wanted more after reading so much about them the thing that he wanted was the skill to use ginto and leiz stil powers but more experimentation must be done. He should grateful the doctor allowed him to have some quincy powers during where the vizard was helping out for the greater good and in a science way. Now right there was these shinigami that needed to be taught a lesson; Kain was about summon his mask until someone else arrives on the scene. No choice but to attack then this weird shinigami told the others to stand down as the vizard was cautious still waiting for the shinigami to make his move. This was new still even though during a previous encounter the captain commander allow him on the grounds but things have changed since those demons showed up. Trying to become calm after the shinigami told his posse to back off however about four of them started sheathing their zanpakutos and yet two of them were on the offensive. Wondering why those two didn't stand down what was going on anyway this sounded like a set-up something was going to happen here and hopefully action was going to speak louder than words. One of the shinigami bastards refused to sheath his blade showing his true intentions "We don't want his kind here just some hollow monsters trying to become shinigami, Kain Howlett was sentenced to death and my father was about to kill him until some Spider-Man showed up and saved your ass. Because of my father actions; Central 46 decided to spare you......your hollow stench cost me my father" Shinigami said.

Kain thought vaguely about that day if this a shinigami had a problem about his father dying then he should talk to the demon who defeated and killed those bastards. He had enough this was the nail on the coffin something or someone needed to put this past event to bed before it gets way out of hand. "YOU SHUT UP AND LISTEN; CENTRAL 46 WAS A BUNCH OF MUTHAFUCKERS BACK THEN. Your stupid father disobeyed direct orders from the Seireitei and Central 46 going after me without permission at all. They killed my best friend a innocent person really the only friend I made during my exile from here. But I wasn't the one who killed your daddy. You want the demon who saved my life from your father and that squad......Damien Zarathos. He's the one you want.......now leave me alone before you taste my blade" Kain said.