Cooking and Fighting are the same!

Mirja wuped away the blood, and then looked to the Shinigami who had come to visit, and train.
"Punching someone is surprisingly complex, and you have managed to get most of it down. A lot of people ignore the rest of their body when going in for a punch, but you through your body into that one, and didn't try to hit me, but hit through me. I felt it. Now, generally punches of that strength rarely connect if you throw them as your first strike, I was just gauging you" she then walked up beside him, and and raised her fists to show him her general stance.

"You'll benefit from something call Metoude. It's a technique where you move both your hands at the same time. The front one bats away their defences, and then the back one strikes before they can react. Generally, cover the back fist with your front so they can't see it as well until you stick it in your face. And don't worry about speed for now, worry more on accuracy. The man who throws a hundred punches and only sees one hit, will lose the the man who throws two and sees them both hit. Also, stop doubting yourself. The quickest way to lose a fight is to believe you have lost"

He looked over her stance as she assumed it listening to her words. It looked like a good stance but he didn't have much experience to judge on. Her words made sense for how to fight hand to hand. Still he learned best by doing so he wanted to make sure he got everything down. She was already in her fighting stance so he figured it wouldn't be to hard to convince her. "Well that sounds great lets see if I got this right." he would say adjusting himself into a fighting stance as well his body slightly turned so one arm was forward with an open palm to block the other pulled back in a fist ready ready to strike. It was an adjustment from his usual sword stance presenting as small a target as possible that had as few vital spots open as he could manage. He wasn't concerned with winning the fight as he would learn plenty regardless of the outcome but he would give it his all anyway. "I find the best way to learn is by doing."

Mirja nodded when he announced the best way to learn was by doing. It was how she learned all of her techniques, after all. Pummeling enemies into the ground was great practice for her. She wondered if he would have enough people to fight for his skill, or if he would slowly dissolve into nothing without much to train with.

"Training by doing is always good. Plenty of people around who will always be happy to give you a spar if you want it. There isn't really much else to teach you, you came here already knowing pretty much everything I would teach"

He looked at the tall woman a little confused. He was sure that she herself would have been willing to spar against him in order for him to practice a bit. Yet her words made it sound as if she was wanting to get rid of him for some reason. He wasn't sure if he was reading it right but that was the way it felt. "Your not willing to spar a little? We can't know how much I will learn unless we try right?" 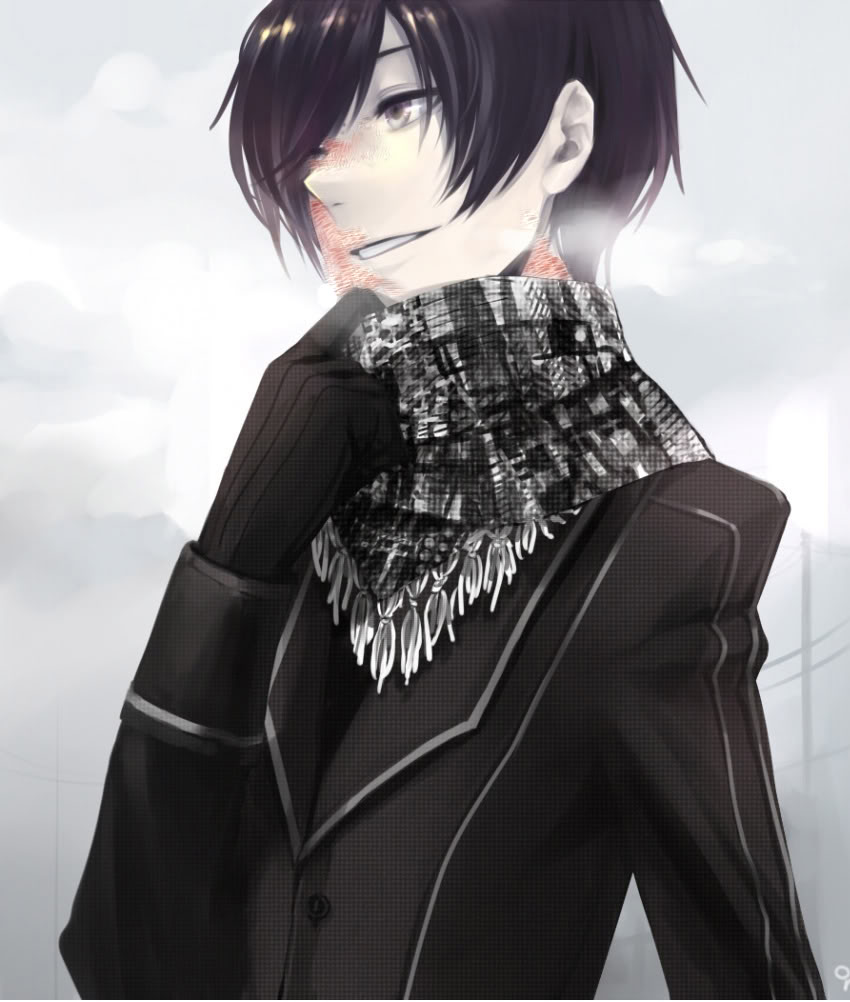 A rude awakening. That is what the boy received. A message that was sent to everyone in the Seireitei that someone was in the Combat Units, waiting for someone to fight her. While it was not something that Henrex had considered at first, he found it a good opportunity to not only get some training in for himself, but for the person he was fighting to gain some strength. Taking a gentle, breath as he wrapped the black scarf around his mouth and nose, before wrapping it around the left side of his face.

The boy's face was hidden completely, aside from his right eye. Now, onto his gloves. Pulling a pitch black glove on each hand, the boy would cover the deformities on his left hand, then simply stare at them for a few minutes. Closing his eye, then closing his hands into fists, the boy would slowly move towards the weapon that sat on his bed. A single katana with black and purple wrappings around the hilt.

Slowly reaching towards the weapon, wrapping his gloved fingers around the sword, Henrex would slowly draw the sword a small portion from the sheath, before pushing the weapon back into it's sheath, closing his eye. Opening it soon after, the boy would move his arm to his side, strapping the weapon to his side and then taking steps to his door, before opening it and stepping outside. Each step that he took towards the Combat Units barracks was silent and empty.

Approaching the barracks of the Combat Units, Henrex's gloved hand reached out, gently pushing the door open, and saw a very strange sight. Two people. However, they seemed to be bloodied, and talking. If they were here to fight and train, why had they stopped? The black-clad boy's eye slid around the socket from left to right, looking at both the male and the female that were there. A small mumble would come from the boy as he slowly and silently stepped in, reaching one of his gloved hands to his sword, slowly withdrawing it from the sheath.

Remaining silent, Henrex's eye would be slowly swapping from looking at the male, then the female. It would be up to them on what they would do.

Mirja shook her head as the Shinigami asked for her to do the sparring. It was the obvious choice, after all, but still, she wasn't in for it.
"No. I don't spar with people very often. It's very difficult for me to avoid hurting them, and the amount of effort that is put into that hampers my fighting ability considerably. I can't give you anything that amounts to a proper spar without putting you in hospital for a month, if you get up at all. You wouldn't be the first person I have misjudged. Last guy I hit so hard I dislocated several spinal disks, from punching him in the gut" she told him. And then, feeling someone else behind him, and hearing the very subtle Tubanari, she turned around to look at some strange guy with his face mostly covered and a sword in his hands.

"This guy, on the other hand, does not look very pleasent. Are you sticking around, or heading out?" she muttered to Thor, keeping her silver eyes on the newcomer, and preparing for anything he might try to throw at her. Figeratively, or literally.

Steven relaxed from his stance picking himself up erect as she said she wouldn't be the one to spar with him. He was a little disappointed that she wasn't willing but he supposed her reasons were good enough. It would end up being negative to train for a while with her and then end up hospitalized for a while unable to train at all. He didn't like the way things ended up and was thinking about leaving all together when he noticed her looking at somebody behind him. He turned to look at the strange guy that had just walked in. He wasn't sure what to think of him since pretty much everything was covered but he noticed instantly that his sword being drawn.

Steven was pretty sure he hadn't met this guy before not recalling anybody that stayed that covered up. That wasn't exactly surprising considering the size of the seireitei but walking in silently drawing a weapon certainly seemed suspicious enough on its own. His own hand went to his Zanpakutō drawing it as he assumed his proper combat stance. Having a sword in hand felt better then getting ready to spar and to hand. Still he didn't want this to become a fight over a simple misunderstanding. "Care to identify yourself? Its not usual to approach with a sword drawn. People might get the wrong impression you know."


Henrex was not used to being asked on who he was. Slowly stepping forward, further into the home of the Combat Units, Henrex blinked, before slowly taking more steps into the building, before he would sheath his sword, and he would slowly bow to them. A formal, Japanese styled greeting, Henrex would quickly rise and place a hand on the back of his neck, before he suddenly had an extreme interest in the left wall of the Combat Units' barracks.

The boy said his name, before his eye shifted from left to right. He had, at first, wanted to take them by surprise, initiate combat right away, test their reactions. Now, that someone had asked him, he felt embarrassed for some reason. Embarrassed that he would try to sneakily attack them? That was his job, wasn't it? He WAS a Covert Ops member, wasn't he? Henrex's eyes the shifted to the floor, and his hand would gently wrap around his sword, and he would simply stay silent from this. He didn't really know what to do....

Mirja flicked her eyebrows as Henrex introduced himself. She'd take a step forward, and smile at him. The guy seemed rather, shy, or just not used to crowds. Probably Covert Ops. Those guys never got out of the house unless it was to kill someone. But, Mirja knew how to handle people like this. Another step forward, a slightly promiscious smile, and then she vanished, Shunpoing to a position just behind Henrex.
"Well, you should have introduced yourself in the first place. Your entrence made people a bit worried that you were here to cause trouble. But you are not here to cause trouble, are you, Henrex?"