Get new friends, and Punch Them! [Yuki, finished]

Yuki was being such a good girl. So complacent, so polite. She stood and waited to be addressed, didn't even move or touch anything. So when Mirja went to clip the collar around her neck, she did not expect any resistance. However, resistance she got, when Yuki suddenly pushed herself away, and scurried to the nearby walk, her tail streight up as if it was some sort of knife she had just held against the girl's throat. Her tone grew slightly heated as well, as she stared and asked questions in a demanding tone of voice, it was kind of sad really.

"It's a collar. It goes around your neck, and it makes you look like a good little pet. Any girl like you should have one, and I'm kind of surprised you don't, so I was fixing that before we got any further with the dressing you up. Can't have a Wolf girl as cute as you without a collar to adorn her neck, that's just against the rules of nature itself. Shouldn't be done, can't be done. So don't be afraid. It won't hurt you, darling" Mirja explained. Her eyes seemed a little unfocused, her tone a touch to airy. The entire situation made it quite clear that Mirja was not exactly playing with a full deck of cards here. 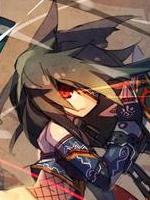 A collar? What? I am no person's pet! Is that why she wanted to meet me? How rude. Just because I am like this doesn't mean I need a collar. She reminds me of the kids from my youth. I don't know if I want to be friends with someone like that.

Yuki's eye narrowed slightly as a faint frown appeared upon her lips. She was having none of this. With a single hop she leaped up onto the open windowsill. Her head lowered slightly out of respect while she spoke, again in a slightly serious tone.

"Thank you for the invitation into your home. I have other things to tend to. Good day."

And, with that, Yuki hopped out and started to walk away, tail finally calming down behind her. She wasn't scared. Perhaps, someday, they could be friends. But today? Today she had just been annoyed. Her weapon wasn't drawn and her arms simply crossed over her chest in front of her, an annoyed breath huffed from between her lips. It wasn't as if the woman would attack her, not over something so little. Besides, even if she did Yuki was completely confident in her own abilities to fight her off.

Something is not quite right with that woman. Alright, relax Yuki. Just go home and tend to your strawberries. Maybe I can invite her over to tea sometime. In fact, I bet that is it. She is probably just tired or something. Yeah. Another day will offer another chance. Maybe, just maybe, we can become friends.

Mirja stood there for several long momenets after Yuki had jumped out of the window and left the building, Collar still in her hands. Had something gone wrong? Was she not dominant enough? Did she not rub ears well enough? Why, had she left.....But that thought pattern was not going to avail her anything at all. The girl left, that was that. No more anything with her. She had made her feelings abundantly clear.
"I guess some people just don't want to do it. I guess. This is what I get for never really working out how people tick. Maybe It would have gone better if I had rescued her like Taichou. But Taichou is to young to be anywhere near this..."