The princess and the slave. (ask frost boss~)

The princess and the slave. (ask frost boss~)


Lightly the bristles of the old broom grazed over the stone platform that sat at the base of the steps to the room of Mistress Yoko Kuchiki. A wet scrub sounded in the air as a cold wind swept over and around the girl who stood sweeping at the wet stone. She wore only a plain white dress, which was now all but see through from the steady falling rain. Her light red hair was patted down messily down over her forehead, and her ivory skin was most definitely shivering.

Slowly her emerald green eyes move up to look out over the large yard of Yoko's home. She could see the decorative wall some 100 yard away or more. She was never really good with distances, having never had any proper education and all. Maybe that is why she was out here now, sweeping in the rain...or maybe it was her slave training. Doing her task daily, in a robotic fashion, rain or shine. 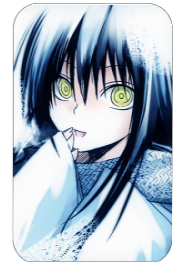 The morning skies above of the Soul Society were obscured by a murky shade of grey as an endless stream of rain drops poured down upon the many citizens whom occupied any open space. For most who had attained a warm place to call home, secured a steady supply of food and were able to master the world in which they lived in, the depressing atmosphere mother nature presented today was simply not a problem nor' a concern. Such as the case for many people in the Kuchiki clan. Most were too caught up in power, status or greed to even pay attention to the smaller, more important things in life. As a natter of fact, it's not too far to say that they cared noting for even other people around them. It's not heard to tell from the way things are ran in the Rukognai.

However, there is one Kuchiki who tries her best to distinguish herself from the stereotypical attitudes the rest of her clansmen portray to the world. That woman's name is Yoko Yuri Kuchiki, a 3rd seat in the noble squad six of the Gotei 13. As of now, she was currently resting up in her bedroom after a vigorous training session in order to soon attain her Bankai form. The good night's rest did wonders for healing her body as she would now awake with a content feeling for life. All was right in her world.

"Morning, already? How pleasant...." She uttered with a yawn before stretching her arms out. As of now, Yoko was simply wearing a white kimono with ankle long socks. Not much considering she just woke up. "Hmmm....?" Slowly, she began to arise from her slumber and looked down upon her childhood friend cleaning up the front section of the house from the inside of her bedroom window despite the fact it was a cold rainy day. "She should have the day off...." Uttered Yoko before deciding to go down the stairs and greet said friend whom name was Tybe.

"You shouldn't be out here, Tybe. Why don't you come inside with me and share a nice hot cup of green tea? It'll be fun!" Spoke Yoko towards Tybe in a cheery matter as she waved out towards her. "You look like you need to dry off anyway. You are soaking wet and I can see through your clothes. C'mon, I got a change inside!"

Thus, with that, hopefully she could turn Tybe's dim day into a ray of relaxation.

The girl stops brushing the broom against the soaked stone as Yoko speaks out to her from the warmth and comfort of her bedroom. Her emerald eyes had a dumb look in them as though she did not exactly understand what she had just heard. It was apparent she had succumbed to the brainwashing of the slavers on this day, despite Yoko's efforts to eradicate such behaviors.

The moment seemed to last for an awkwardly long time until a crawdad scuttled its way out of a small puddle nearby. It marched its way into Tybe's foot, and in a fit of crawdad rage it used it small pincers to pinch her left foot. The girl made a look of pain for a moment, which seemed to snap her out of her brainwashed thoughts. She lifted the foot in the air, taking it in her small hands before crying out, ''ow ow ow!''

Suddenly her right foot lost traction and she slips, landing onto the stone square on her butt. She sat wet, cold, and in an undignified position for a moment. Slowly she stood up and rubbed her bruised bottom through the soaked material of her dress. It was now completely see through, revealing she only wore a small pair of white panties. She winced as she waves to Yoko and waddles up to the wooden stairs and hops up them before carefully sitting on the wooden porch, covered by the ceiling. She watches as rain poured down from the slope before she turned to enter. The thought that she would ruin the inside with her damp clothing crossed her mind and she called out, ''Mistress Yoko, I can not enter! I would ruin your home!''.
__________________
The baby sister Arrancar Flea~: 0-5
https://www.platinumhearts.net/t6886-flea-vers-4-new-in-red

(OOC: Sorry for the delay in my post. I've been sick the past few days and yesterday I stayed up nearly 40 hours so I haven't really been in the mood to role play.)

"Now you are really soaking n' wet, Tybe~" Spoke Yoko in a calm and gently voice as she witnessed her friend falling on the stone concrete before her. "As for my home, don't you worry about that Tybe! I'm fine, it's all fine!" Yoko added on while attempting to pick up Tybe and throw Tybe body over the right side of her shoulder. "You need to be more worried about cleaning yourself up!" Grinning happily, Yoko looked towards Tybe and pattered her head ever-so softly. "After all, even if you are hellbent on being my servant, I can't have you going around looking like that. Even slaves need to be respectful looking."

So with that, Yoko went on to enter her house either with Tybe on her back or dragging her across the room. Either way, this was going to happen in Yoko's mind. "Now c'mon! You really need to change!" As Yoko was either leading or carrying Tybe throughout the house, she eventually came across a large living center with brown, wooden table in the center and a nicely colored widescreen monitor of some sort. This would be their first stop on the journey of cleaning up Tybe's wardrobe.

"Now, you sit here." Yoko said while pointing downward at the brown table that had a comfortable matt under it for sitting. "I'm going to get you a change of clothes and something warm to drink. You look really miserable and I simply cannot have that." Thus, Yoko giggled once more and went off upstairs to fetch Tybe an old, black kimono she had buried underneath her closet. "This should do, I mean you can't see through black in the rain!"

With said kimono hand, Yoko reappeared back downstairs and placed it gently on the brown table. "You shall change into this while I go fix the two of us some hot green tea!" Yoko requested before she had went on into the kitchen to create the green tea. After a few minutes of waiting, Yoko came back with two large wooden cups that had a fresh batch of tea in them. "Here, take this!" Yoko said while placing Tybe's green tea next to her while at the same time taking a seat on the matt below them.

"Now, isn't this comfortable and don't you feel better with a new set of clothes?"

Yoko's voice washed over Tybe like the rain had just moments ago. Her voice had always been mesmerized by her older friends voice, even when they were kids. It was kind and gentle, but had a firm and commanding hint to it. It sent shivers down her spine more then the cool air on her rain soaked skin did.

Tybe was still in this semi mesmerized state when she suddenly found herself up and over Yoko's shoulder. Her strong hand patted the girls head, and Tybe once again felt herself shiver. She had always felt a strong connection to Yoko, and the fact that she was now her Mistress made it even stronger. There was also the fact that Tybe was a submissive SM lover. That probably added to the feelings she now had.

They entered the house, Yoko walking and Tybe on her shoulders.

"Now c'mon! You really need to change!" Yoko commanded as she carried Tybe into the living center. "Now, you sit here." Yoko said as she lowered Tybe to the ground. She pointed at a sitting mat under a table. Tybe moved over to it, her face a bit red from the flustered feeling in her heart as she sat down onto her knees, the backs of her slender legs squished slightly by her rear end. Yoko again patted her head as she spoke with a soothing, non threatening tone. She said something about a kimono and tea, but Tybe did not hear her. She was busy listening to the thundering noise of her heart. She wondered if Yoko heard it as well.

After several moments in which Tybe had a chance to regain herself, Yoko reappeared with an old black kimono. She sat it on the table before her. "You shall change into this while I go fix the two of us some hot green tea!" She said before turning for the kitchen. Tybe blushed as she pulled the soaked white dress over head head, sitting now in only her undergarments. She had not worn a kimono in some time, and stood up struggling with the article. Yoko entered with the tea and Tybe hastily finished with the kimono and took her seat on the mat. "Now, isn't this comfortable and don't you feel better with a new set of clothes?" Yoko asked as she sat across from her. Tybe nodded her head slightly as she tried to maintain a certain level of grace to match Yoko's. She was failing.

Tybe took the wooden cup in her hands and took a small sip. She placed it down and her emerald eyes gazed over Yoko for a moment. She felt her face redden slightly as she looked back down at the wooden table.