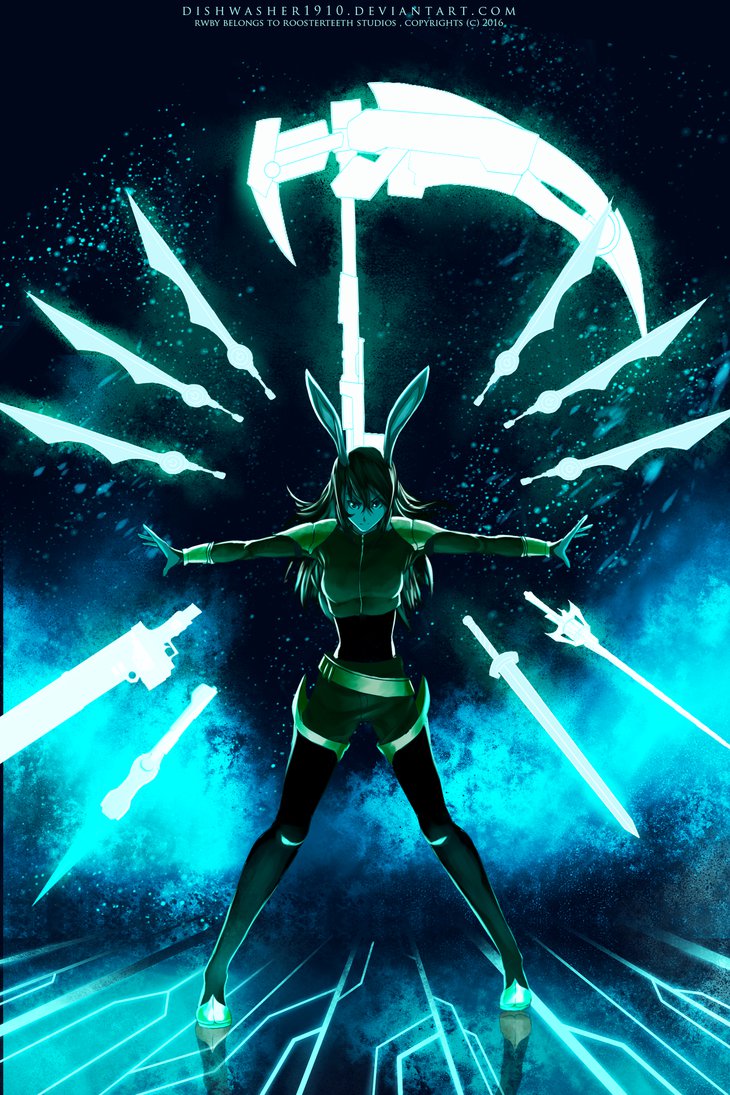 Vandenreich: This main organization for the Quincy is what Velvet considers her home. While she may not socialize with the other members as frequently as others might, or as she does with Toshiko, she still considers the Vandenreich her home.

Toshiko Kamenashi: This girl....oh dear, where to start? Well, Velvet views this girl in extremely high regard, due to her status in the Vandenreich, and what she has done for Velvet during her life. She taught the rabbit girl how to do a small bit of hacking, introduced her to the Vandenreich, and was pretty much the guidance that she needed to get through her life. She is Velvet's best friend, and although she will never admit it, she is Velvet's love interest. She enjoys spending time with her, and she hasn't ever wanted to leave Toshiko or the other way around.

» Physical Appearance Description: Standing at five and a half feet tall, minus her ears, which would make her six feet tall, Velvet is your average girl, in terms of physical structure, as well as the rest of her appearance. The first thing that makes her stand out would be the two large bunny ears that protrude from the top of her head, which stands perfectly straight up. Upon close inspection, one could deduce that these ears are perfectly real, as well as very soft and fuzzy, as deduced by Toshiko. Furthermore, descending down her body and arriving at her head, Velvet can be noted to have chocolate brown hair, cascading elegantly down the back of her body and stopping just short of her waist.

When it comes down to clothing, Velvet has two main outfits. The first one would be her main, or otherwise known as "casual" outfit. Now, it is rather strange to view this as casual, or even comfortable for that matter when you look at it for the first time. While it isn't exactly the tightest thing in the world, it isn't exactly form-fitting either. With her still sporting the color of chocolate brown, the outfit that she wears is a two-piece outfit, despite the appearance saying otherwise. Firstly, it should be noted that this suit is by no means weak, or made of some sort of cloth. While a good portion of it is, the golden-looking shoulder pads, as well as the wrist-gauntlets are far from it.

They are made of steel, albeit Velvet requested that they be spray-painted gold in order to better match her outfit. Going into further detail of what else lies on this outfit, there is one accessory that Toshiko gave as a birthday present to little Velvet when she turned 21. A small patch just above the left breast of the one-piece. With a golden border, a pitch black background, and a pink heart in the center. Velvet treasures this gift with her life, and often stares at it in her spare time. Going past that would greet an onlooker with a black undershirt, further questioning the legitimacy of it being a one-piece.

As we get further down her body, her lower half consists of a single golden belt to separate her shirt and pants. Being a dark brown as well, slightly darker than what her shirt is, this really doesn't have much of anything of significance. Reaching the legs, the ends of the brown pants cut off with golden hems, before turning the color of black, down to her shoes, which, as expected, are also brown. The final things that Velvet has in terms of appearance would be her eye color and her skin tone. Upon staring into the rabbit girl's eyes, one would see that they are pitch black, similarly to that of a rabbit. This does not only extend to her irises but the entirety of her eyes. Finally, as stated before, her skin tone. Being a girl who would find herself in shaded areas, she never really got much of a darker skin, and to this day remains as pale as a ghost. 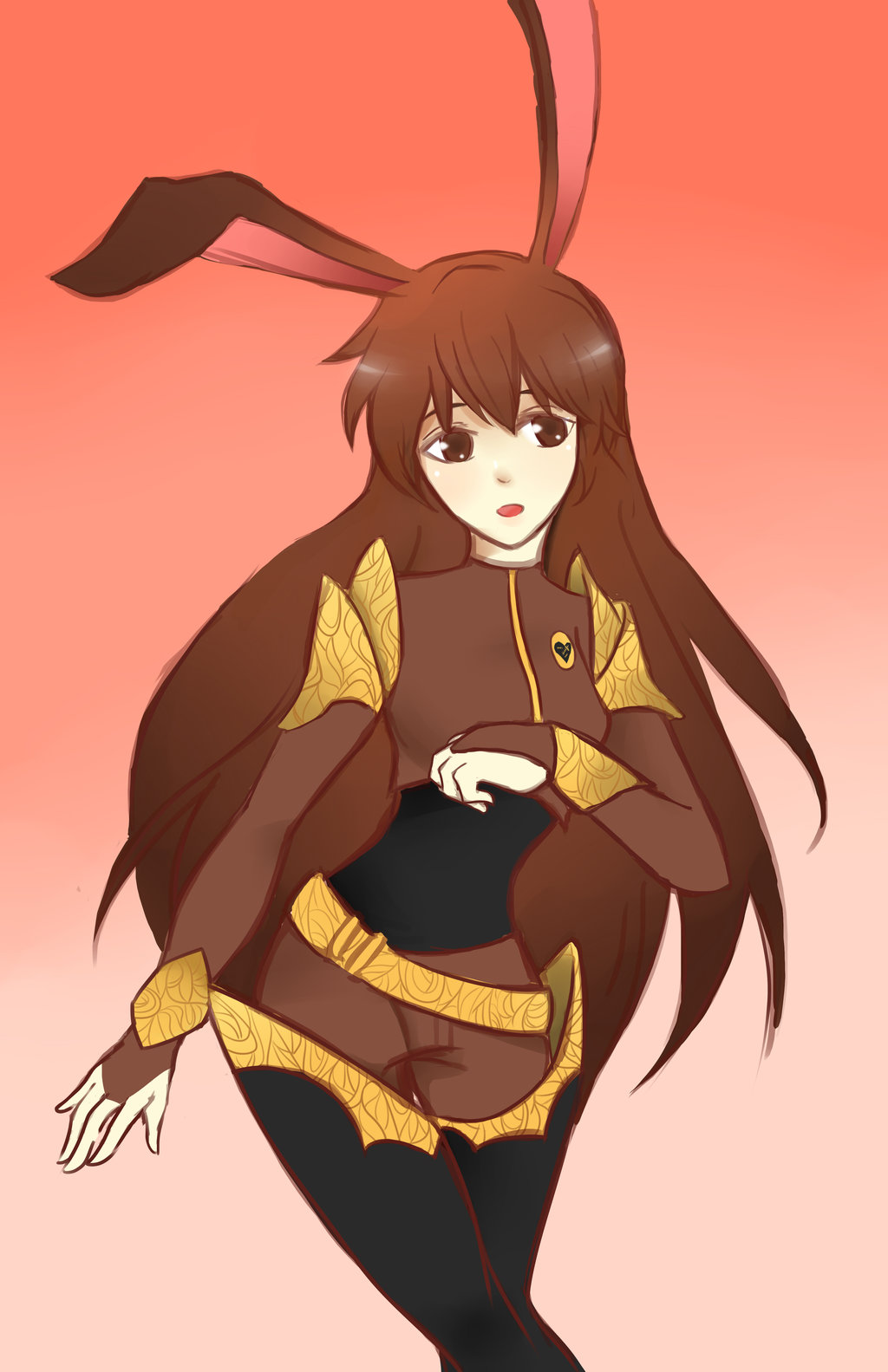 Timid: This is probably one of Velvet's largest traits, outside of her kindness. While she can be seen socializing around the people that she knows and trusts, the same cannot be said for the unknown. For her, these are places that she doesn't want to venture into unless she has little to no option left. When it comes to these times, Toshiko or someone in the Vandenreich are the ones who can coax her out of these. So, it should come as no doubt that the main points of this trait come from the fact of Velvet being incredibly shy, and hesitant. This is usually something that spawned around new people and large crowds.

When she is introduced to those situations, Velvet can be seen being a lot more quiet and selective when it comes to topics of choice, for fear of having others hear her. Even with her own naturally increased hearing, she is someone who likes to keep certain topics private, when in public. So, with that said, it should also be noted that he timidity can also be extended to fear, as Velvet is someone who can be spooked quite easily, leading her to become even more of an isolationist, and end up detaching herself from conversation with someone for a short time, should then be the culprit for scaring her.

But, there is still one thing that Velvet has, as a result of this trait. That would be the somewhat inability to connect with people, despite being desperate for a connection with other beings. This truly describes how shy she is. When it comes down to it, as said before, she is not a people person. She will usually avoid contact with others entirely. This is not because she doesn't like to socialize with others, it's actually quite far from that. With her, Velvet simply doesn't know how to connect with others, and cannot tolerate the anxiety that comes to her when it comes to situations like these. For most of her life, this has been damn near impossible to overcome, aside from when it came to Toshiko. She was the one who was persistent to know about her and such, and eventually leading her to where she is today, and what Velvet thinks of her today.

Kind: Full and through, Velvet is a gentle soul. She finds it hard to be angry for long periods of time, and she will -- more often than not -- prefer to make acts of kindness as opposed to others. Despite the events of her past, she still finds it hard to not be kind, as it's something that's so deeply ingrained into her personality that it becomes second nature for her to act like this. An example of this would be her distinct lack of hoarding things, as she often will give various things that she doesn't believe she needs to others -- simply because she wants to do the right thing. This desire is something that heavily drives her goals, leading to the mindset of a protagonist. She wishes for a peaceful world, one that she can live in without the worries and fears that she has now. Thus, she treasures these moments immensely, as they mean everything to her.

Furthermore, this trait also leads her to be rather affectionate around those that she becomes close to, wanting to show her appreciation for them and, for her, this is through various forms of affection, as it allows her to show how much she appreciates and cares for others in ways that words could never even come close to explaining. Furthermore, this is something that only is strengthened by Toshiko, the woman who took her in and gave her a home and family. As a result of this, she can often be seen to be very happy and affectionate around her, as she is eternally grateful to Toshiko for what she's done. Ergo, this trait is likely one of the ones that define her person the most out of everything.

Jack of All Trades

Quick As A Rabbit:

Bubble Of Fluff: Extending the fluff of her tail into a defensive bubble around her, and can do to others.

Blut - Mental Burst: Energy allows the user to process and think at a much faster rate, increasing the ability rate to create things, and Mental Deduction.

Knowledge of Spirit Weapons: Main basis of how her own spirit weapon works

-Can copy other spirit weapons?

-copies weapons, but she makes her own unique abilities for it 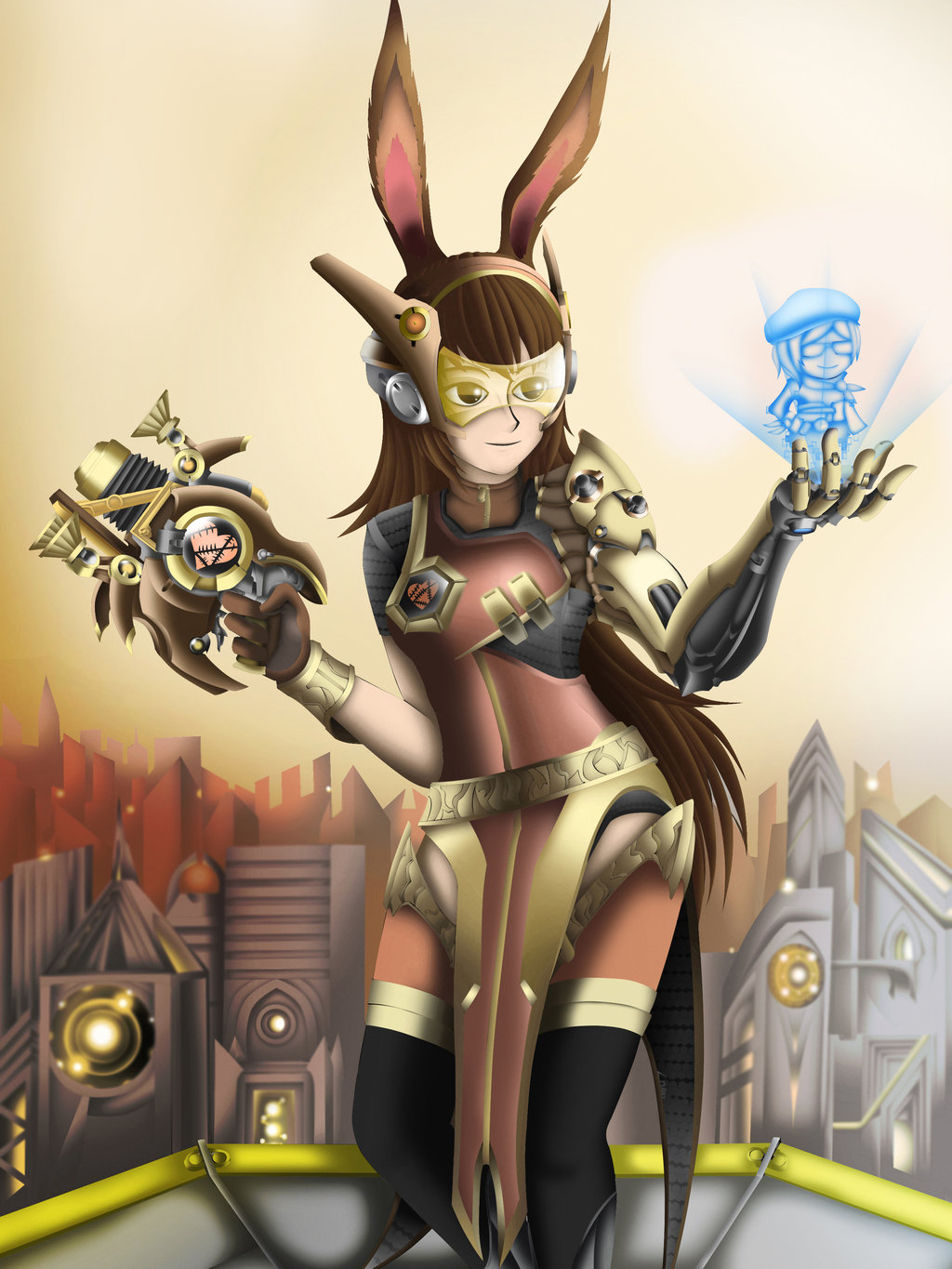 END OF THE RABBIT GIRL'S APPLICATION