Ulquiorra strolled through the endless desert of Hueco Mundo, his hands casually slipped into his pockets as always. His feet making gentle, padded "thumps" as they hit the sand, one after another, kicking up a small cloud of dust in his wake. The moon of Hueco Mundo hung high overhead, not a cloud visible at the moment. The roof of Las Noches was also visible far in the distance. He had a lot to think about. His new cause, recruiting members, and getting the rust off of his blade were all on his mind. Killing minor hollows was no way to warm up your muscles, or any part of you for that matter. It took next to no effort, so that wouldn't do it.

What was this timeless place she wonered constanty? She grew weary of it, she had been to earth a couple of times, that was where she meat her suppririor, Saya...Gryphon Daichi was Saya's Faccion. And she was very proud to be so indeed, where Saya was right now, she didnt exactly know. So this gave her time to wonder about some more and possibly train. She pretty strong, and could definatly hold her own against a captain.
She needed to train...it'd been soo long since she'd train with someone higher than her...she felt like she wasnt being challanged enough, maybe today that would all change?
As she waled, she senced someone...someone that she'd heard of, Ulquirra. He was strong...very strong.. Then a crazy thought occured to her...
What if she spared with him? It would be benifitial to her and to him, she was sure. There was plently of lant around for her to put up a damn good fight, so why not?
Gryphon made her way to where she senced him, it didnt take long before she was standing before him. Gryphon's emotionless face rivaled that of Ulquirra. The only hint of emotion might be for a slight sparke in her neon green eyes.

"Ulquiorra-sama..."
She was about three meteres away from him. She bowed down respectfully to him before raising back up to look him in his near dead eyes.
"It's an honor to be in your presance...May I ask why someone of your power and rank is doing out here?"
She asked her hands folded infront of her.
__________________

Ulquiorra stood motionless, face towards the moon as he did so. It was a nice night, really. For a desert, the air was cool, the breeze catching his hair rather nicely. His acidic green eyes staring blankly at the moon as he contemplated the decisions he had to make. Should he really support this woman? Was it really within his best interests to help these people with a cause as noble as theirs? Sure he agreed with it, but going up against the entire arrancar race? AND the shinigami? They may be powerful, but it seemed like a suicide venture to him.

As she stood there, like a stature listening to Ulqurria's responce, he asked her the same question. She stepped a little closer so that now they were only about a meter away, she heard him mention he was looking for a spar, this peeked her interest, thoug it didnt show on her face.
"My name is Gryphon Daichi...I'm Saya-sama's Faccion."
She introduced herself, bowing her head again politly.
"And..I'm here to train, really. I havent seen Saya-sama in a little while, so I'm taking this time to train...But..."
She paused for a moment before continuing.
"Perhaps...we can help one another, we both seem to be looking for a sparing partner, perhaps we can? You are quite stronger than me, but I think I will be able to hold my own..and give you a decent fight, one that wont be too easy."
She said nodding slightly to him as she awaited his responce.
__________________

Ulquiorra tilted his head, "So you serve the current Espada? I see." He said, thinking over how pathetic the race he belonged to had become. Could this woman be worth his time if she served those he opposed?


She didnt know his whole story, and she really didnt want to hear it right now, if it was important, she'd hear about it eventually. If she was cuirous enough later, she'd ask him about it, but he didnt seem like a man that would disclose personal information just like that.
He agreed to spar with her, he warned her that he would not hold back.
"I understand, and I shall not hold back either."
She nodded as she took her stance, her eyes were cold and focused, she was going to give it her all, and learn from this battle. She waited for a moment, then desided to make the first move. Her hands were out infront of her, palms facing her, arms up about chest high and fingers closed together. Gryphon's body slightly tilted to the left as she leaned on her left leg a bit, her right leg was swung into the sand, once her foot made contact with the sand, a burst of sand rippled out from her foot, and shot up all the way to Ulqurria something like this: 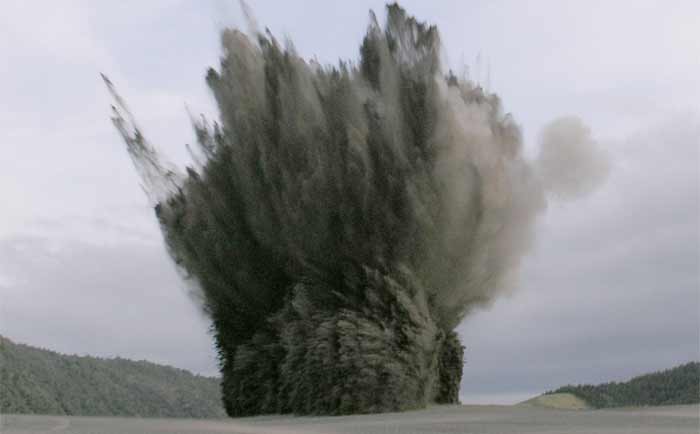 
The sand was clearing a little bit and she couls see that he was standing there as if he was unmoved, the exact same position as before, and that infomous face...that emotionless gaze. Again, in that same position she kicked again, appeared to the left, kicked again, appeared to the right and licked again. This time around after the third kick, she stomped on the ground creating an earthquake that was strong enough to rattle large buildings and cause some damage. Yes, these were all test strikes; but she did them. She could sence where he was, now time to try and bind him. She raised her left hand to about eye level arund her oppnent the sand shot up to a good story higher than him, it twisted and bound together as it was now trapping him in a cage of sand. She waited and was getting ready to strike. Was she holding back? A little bit yes, but this was afterall, just the beginning.
__________________

Ulquiorra scoffed, was she for real? He easily stopped the first attack, once again dismissing it with a hand, sonidoing around the second and third. Upon feeling the earthquake, he jumped, holding himself aloft in the air. Ground based attacks were nothing to someone who had control over their reiatsu.

Gryphons eyes locked onto her oppened at she saw a blast shoot out from the sand cage, right now her main objective was to restrain or ware him out. From the sand that was now fluttering to the ground she extended her right hand and clentched her fist, as she did the falling sand was now bound together and shot up with a great deal of speed and power as it twisted around Ulquirra's ancle and tugged him back down.
The sand that had twisted around his ancle was probably no thicher that Gryphons wrist, it was just sand, packed together and acting as an extention of her own arm. Gryphon didnt like drawing her sword right away, she'd use her earth abilities as much as she could until it was time to pull out her weapon.

She contimplated for a moment weather or not she should use Bala, Cero...or her sand...Or...what about hand to hand combat? She'd been wanting to brush up on that...She flash stepped just above Ulquirria and swung her left leg down towards him, intending for her heal to strike his head.
__________________