Gryphon's face reamint as still as it was at the beginning, much like Ulquuira's, in a way they could be mirror images of each other, with their lack of emotion and their black near lifless green eyes, they could potentially pull it off.
Cero...
That was his next move? It would appear so....Gryphon used the arm he used to block her kick to 'kick' off of to get some...not a whole lot...but some distance between them as she pointed her pointed two fingers at him, two could play the cero game right?
"Cero.."
She mimiced. Gryphon was now contimplating weather or not she should use her sword, but pushed that thought to the back of her mind for a moment...right now, that wasnt going to be an option...unless he used it.

The force of their blasts would enevadably push her back, and seeing that she couldnt fly or have control of where she could move to very much she would use the blast to help her get a bit more distance and use the sand to cution her landing. He was honestly not even trying, she was rusty on combat and so was he.

Ulquiorra saw her next move before she preformed it, using his arm as leverage to back away from him, and then blasting at his cero with one of her own. Thus effectively countering the movement and separating the two of them. It was a smart move, Ulquiorra thought, but futile.

His body being pushed by the force of the cero, he slid back a few feet, still keeping his reiatsu stabilized to where he was able to stay airborne. He was not losing his ground over a simple counter.

Ulquiorra debated in his head, should he try and finish it? If he did try to finish this quickly.. it would most certainly mean he'd have to use his sword. There was no doubt in his mind, as he stared into the woman's eyes from a distance, that the real fight would begin once he drew his sword.

He closed his eyes for a moment, finalizing his decision before taking action, drawing his sword in one fluid motion. Holding the blade in his right hand, keeping his left casually slung in his pocket.

The match had only begun but already he was trying to end it? Gryphon made sand flutter upwards to cution her fall, the sand caught her and gently placed herself down onto the ground. She stood still, arms to her side, back straight, legs together with her left leg just slightly ahead of her right one. The wind blew a tad bit violently making her hair race to the side along with some strey sand that got caught by the wind, traveling with it.Her eyes never left Ulqurria, with an oppenent like him, taking her eyes off him would be a rather stupid thing to do. She saw him draw her sword...She remaind still and emotionless. A few moments passed in silance, in still as a stare off was happening. Finally, Gryphon reached her hand to her sword hild and slowly drew it. 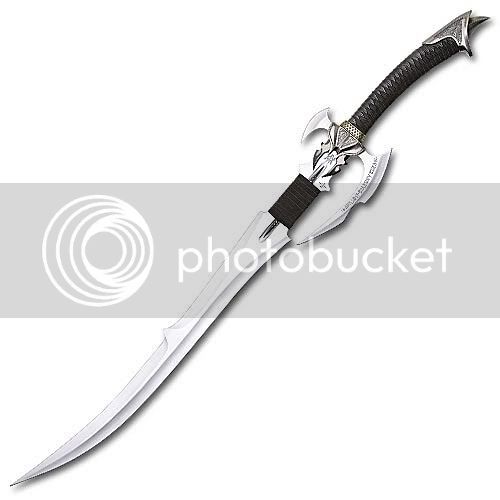 The wind slowed down a bit, almost as if holding off in suspence. Gryphon used shunpo so that she rather close to him, sword swinging...rather slashing towards his torso. In truth, she hardly used her sward, she usually used her Earth abilities, guess this was going to be a lesson on swordsmenship[/center]
__________________

Ulquiorra felt rather bored by the time the woman had decided to draw her sword. Was she hesitant? Ulquiorra figured by the movement of her hand on the blade that she was more accustom to her earthen abilities. He had chosen wisely by staying in his domain, the sky.

She saw his balde slide down hers, making its way towards her shoulder, in a way she kind of felt like it was happening in slow motion; Gryphon quickly turned a bit to the side so that his bade would have just barely grazed her shoulder. She took a slight step closer and cruched down just a bit, attempting to elbow him in his gut; if that were connect then she would follow it up by using shunpo to get behind him and attept to thrust her sword into his rib cage.
__________________

She had sucessfully elbowed him, though she figured that didnt do much,
a strike was still a strike. Gryphon's next assult failed, he had sonidoed past her blade and then above her. A slight gasp escaped her moth as she noticed where he was when he fiered his cero; she sonidoed to the left of the cero bast but just barely escaped it's strike, it did however send her flying a good 50 feet. With his cero blast and her falling/tumbling a good 50 feet, it kicked up a lot of sand.
"Urrgh.."
It took her a few seconds to get back up and shake herself off from that little fall.The dust was still settling down when she was fully on her feet now, she was a bit shaken by Ullquiria's blast.
Gryphon's hand moved fluidly up above her head, and with her arm movement, followed the sand, not to attack him but to get at his height; she used the sand almost as a tower. It fell and shifted and restabalised itself as it braught her closer and closer to his height; it wasnt a slow process bit it wasnt a fast one too; in that time she took to reach his height, she heald onto her sword, clentching it in her right hand and heald up her left hand toards him and charged up a bala blast. By this point she was about 3/4 the height up to him, and then she fiered it. Right when she did she solidified the sand that was beneath her feet and she pushed off of it, leaping up to his height now; once the bala was done and passed, weather it struck him or not she would follow up by thrusting her sword towards his left shoulder; if that were to connect, she would continue on with her assult by slashing down verticaly, again on his left side. If he were to block her sword with his, she would push her blade against his pretty much like this: 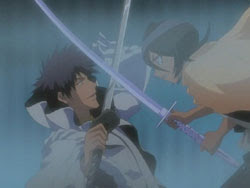 He 'redirected' her first strike and she ended up cutting off oa peice of his uniform. Not what she was hopeing for, she'd just have to try a bit harder. When they were in their sword lock battle, she noticed that he was using both his hands for a bit...she noticed he glared at her for a bit and then raised his free hand up..she saw what was comming. Her eyes grew wide, she didnt have enough time to escape or doge that, it was a head on blow
"Gahhh!!"
She went flying...crashing down towards the earth, even sinking into the sand a few feet. Some peices of her uniform was torn...not like she had much on to begin with...
she slightly moved her hand up to get herself out of the sand and then solidified the ground beheath her so that she'd have something stable to set on. She struggled to get back onto her knee. She tilted her head up towards her oppenent, narrowing her eyes at him; not in anger or anything. Her limbs were a bit shaky, but she didnt want this to be over yet, this wasnt over yet...
If...If only there were some way I could get him grounded...
He had a big advantage being in the air against a ground opponent like herself, and she was well awear of that. Little by little she began to sand up, slightly swaying as she did. Soon regaining her balance and getting into a stance. She settleded her breathing down before desiding to try and bring him down, using what she had all around her, the earth.
Gryphon shifted her weight to the right and allowed her hands to follow ina fluid movement as both her arms shifted to the right too; with that, the sand infront of her began to shift to the right, following her command. She then raised her arms up and again, the sand followed her, she was aiming for Ulquiorra. As the sand lifted off the ground and towards Ulquiorria, it gained speed and quickly. The sand sand rushed towards him; if the sand were to come in close enough range of him, she would clench her fist and shift it into a metal like stalagmite; if it werent to connect, she would disolve it back into its sand form and have it go after Ulquorria again and attept to do the same thing by changing it into a metal but with smaller but several more stalagmite's. All the while, she thought it was time for her to use Cero. As she watched how her sand would play out, she heald out her left hand and aimed her two fingers at him, charging up her cero.