The bullets whisked through the air, hitting every target center mass over and over from a distance of about 20 feet. The male would press the button, bringing the target he was shooting at back towards him with a smile and placing it down beside him.

He said with a cocky grin, switching the hand gun back to safety and storing it in it's holster. There was nothing that really helped clear his mind like firing off a few rounds and a nice meal after. His hobby allowed him to practice for slaying anything viewed as demonic while also giving him a bit of recreation, so he was easily killing two birds with one stone. Now that he had finished eating however, he'd have to answer today's second burning question:

What should he eat?

After all, the current city he was in wasn't at all like Karuakura. It didn't seem to have wall to wall amazing places for him to indulge in, it seemed okay on it's best day. So today's adventure wouldn't have any kind of grand mission-

No, that's a lie. Because food was important, nutrition was needed in order to make this day better. Otherwise what should just be a relaxing day would end up actually feeling off. Thus he was now off on his journey to find something good. He may very well just end up with a burger, but he's hoping that's not the case. In his usual outfit of a white T shirt with a blue long sleeved one underneath and black shorts and tennis shoes, he decided to ditch the whole idea of walking and got onto his hover board instead.

So he's just hover boarding in city in search for whatever looks good. 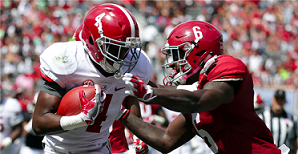 Re: "Do Blondes Really Have More Fun?" [Private, Ceal]

[It was a moderate city within the MidWest, a bustling street that still had the hint of rural about it. Looking out upon this location, one could be reminded that even 400 years later some places may never change. Though pockets of demon civilization sprout up within the confines of the USA, that places like this, still entirely human, exist.

A small shooting range, just off of the main highway, adjacent to a gun store is the place in question. The sounds of side arms and rifles alike popping off with loud, jarring bangs. It was midday, yet the place was seemed to be doing good for business. One could wonder what there was to do in these lands, the places that ordinarily resigned themselves to the daily grind]

Watching the guy pop off at the handgun was interesting to say the least, a slight grin appeared on her face as she watched from her perch atop the wall that surrounded the shooting range. She looked out to see if she could identify the man's gun, but realized it was no use. With a slight shrug, she knew deep down she'd never gotten into that sort of thing. Weapons had never interested her in the past, even if they did more so in these later days.

Though the girl on the perch never frequented this place much, she still had never remember seeing this guy before, and that was saying something given this place's scare population. A traveler, a wanderer perhaps? With a roguish grin, she hopped down the wall, making sure to tap her foot on it with enough force to propel her through the air, landing some meters away from this particular person of intrigue.

Upon walking up to him, he would be able to get a few of the green-eyed blonde, sporting attire more like what she used to wear before her ventures into the demon world. A zipped up green jacket with a muffler over the collar, a flowing, pleated skirt coupled with a pair of nice boots with a modest heel. She decided today was one of those days where she tried to embrace the human side of her, to indulge in the things humans typically do. She had enough of being made into a living pin cushion for demons for one day, though it's hard to say whether or not that kind of treatment changed her forever, at least not yet. Regardless, she would reek of their aura no matter where she went, and for quite sometime unless she expunged that existence entirely from her body. And everyone knew that wasn't going to happen, not with the Seal of Eris burning a hole in her stomach.

”Hey there, stranger. You don't seem to be from around here, did someone get lost?' She said, speaking in false innocence, her grin more mocking than it was genuine. Her flippant dialogue ought to make him believe that she was being playful, or perhaps condescending, regardless, this was not the kind of way Ceal would ever have gone about it. Oh, how she had been changed.