Aerasanya, The Conquest of Destiny [Hayden Weapon] [Event Only]

Aerasanya, The Conquest of Destiny [Hayden Weapon] [Event Only]

"...And the powers that be,
shall grant unto thee
A Conquest of Destiny..." 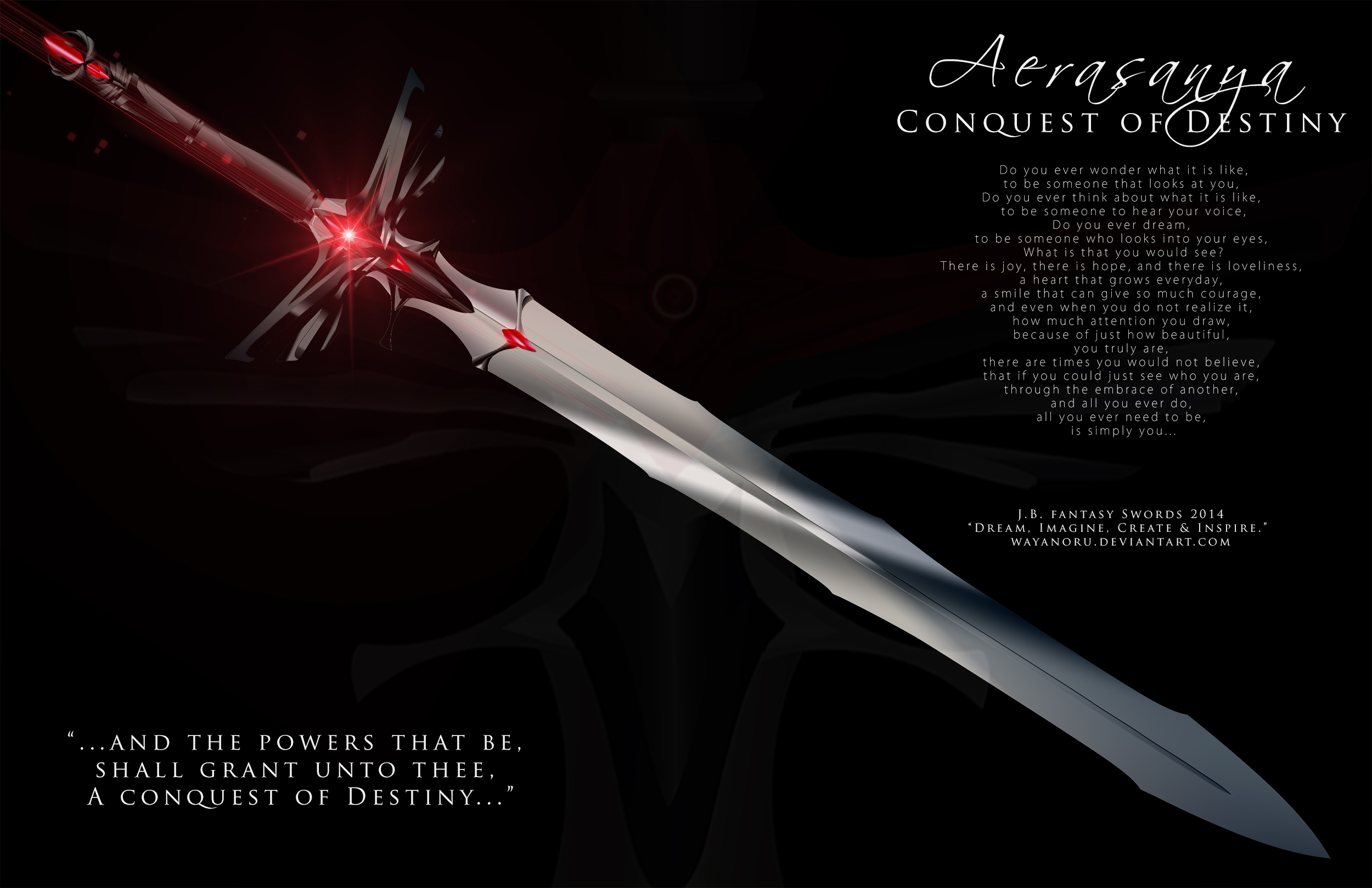 Do you ever dream,
To be someone who looks into your eyes,
What is it that you would see?
There is joy, there is hope, and there is loveliness,

A heart that grows everyday,
A smile that can give so much courage,
And even when you do not realize it,
How much attention you draw,
Because of just how beautiful,
You truly are,

There are times you would not believe,
That if you could just see who you are,
Through the embrace of another,
And all you ever do,
All you ever need to be,
Is simply you..."
Aerasanya is a beautiful weapon. Crafted from Vastime's own metal, Valisitium, Henrex sought out the best material that he could get to make this weapon for the King Militant of Vastime. This is turn is something that makes the weapon itself incredibly durable, as well as immensely powerful in terms of cutting potential, and destructive power. Aerasanya is a light, one-handed broadsword, with a single, blood red gem placed in the hand-guard. This gem is a seal that was created by Henrex, which responds to two things -- battle, and Hayden's willpower.

Within a battle, there is a thought, or an idea that causes a man to draw his weapon, and fight for those beliefs. For many, those beliefs and thoughts are actualized through their actions, showing how far they are willing to go for what they believe in. Aerasanya reacts to that, and responds by fueling those desires. So, whenever Hayden enters a battle with this weapon, his aspirations, his goals, and his dreams are recognized by the gem, and they it brings that to life. In short, the ability that this weapon carries can simply be summed up as Dream Manifestation.

Whenever Hayden enters battle, there are certain goals that he has during said fight. For example, one of them could be disarm an opponent, or to break through their defense. They could be anything that is reasonable, and physically possible for Hayden to perform. This will cause the gem to remain it's crimson red color for the duration of the thread, until one of these goals are achieved. When this happens, the gem will turn bronze for a few moments, before Hayden would feel his determination to heighten even further, which has multiple effects to it.

The first thing would be the passive aura of determination that is present whenever an objective is completed. All those around him in a mile radius will be able to see, and feel Desmond Hayden's determination. Furthermore, this is something that enhances the "feel" of his attacks. This does not enhance any of Hayden's current stats, but it does allow those who his attacks are felt by to "feel" his intention. Again, this is not something that has a heavy effect on how an opponent can defend, or ensures that his attacks connect; it is simply the power to let his desire flow through the blade.

However, things get more interesting when more objectives are completed, specifically, around three. When three objectives are completed, Aerasanya causes his willpower to cause Hayden to enter a state of "Indomitable Will". This is something that heavily affects his ability of focus, as well as his ability to feel pain. Within this state, Hayden is unable to feel pain. It would not matter if his arms and legs were taken from him, he would not be able to feel something that would waver him from the path to his desires.

However, this is something that is very short-lived. While this is a very powerful state of being, this is something that can only last for three posts, before the effects fade, and Hayden would not be able to enter this state for the rest of the thread. This does not mean that the effects of completing the first objective would fade, however -- as his determination is still influenced in his strikes.

Furthermore, the objectives are able to be failed. These tasks are ones that must be completed within the span of five posts, or Aerasanya will consider them as failed, and it will move on to another one. If three are missed? Then Aerasanya's effects, outside of it's physical attributes, will not function. objectives will not be presented after this, and the weapon will only be able to be used as a normal weapon. So, Hayden must pick the time to use this weapon wisely, as this is something that cannot be hastily used. It must be used with the best intention towards his goals and desires.

» Obtained From: Henrex made this himself.

Re: Aerasanya, The Conquest of Destiny [Hayden Weapon] [Event Only]