People with brains, and me [Mr William] 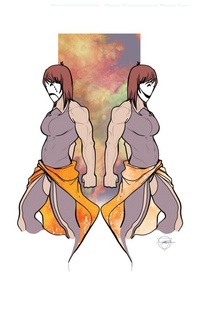 Re: People with brains, and me [Mr William]

Jessica realized her head was still open and she probably needed to deal with that as Alexander spoke. Jessica shook his hand with a nod. She caught about half of what he said and shrugged lightly with her large shoulders. She really had no idea where she should go to get checked out, if she even understood the actual context. To her the statement came across more as "need healing" than anything else. She rolled her shoulder and relaxed a bit as she decided what to do for the next few minutes. Jessica strolled after him as Comedy and Tragedy danced obnoxiously in and out of her vision.

The young woman ended up following Comedy as she danced away with her eyes seemingly looking at nothing or a joke that no one else could see before looking back at Alexander. "Where go?" She asked in her lack of intelligent speech. She was now more confused than when she had gotten there but she was smart enough to understand she was outclassed and continuing to swing at him would just make her get flattened again. That was probably the one thing Jessica didn't want over anything else. It just seemed like it was a bit out of the range of her intelligence. "Fix Jessica where?" She asked in her broken speech.

Re: People with brains, and me [Mr William]

With a deep sigh, Alexander would turn around and begin walking away. This woman had a long way to go. She seemed really dumb. However, anyone could improve given enough effort, right? At least, he hoped so. More for his sake than theirs. He didn't want the annoyance of getting along with them to go to waste, which it would if they went off and died because of their stupidity. Still, while he wouldn't call it promise, there was some... potential, and he didn't want to waste it. If they wasted it themselves? Well, then that wasn't his problem. They could either die or get better, and both benefitted him in some way. If the former happened? He wouldn't have to deal with them anymore. If the latter happened? He could get some use out of them.

Remembering that, at least for now, they were incredibly stupid, Alexander would turn around and make sure that they were following him and not just standing there, beckoning to them if they were. He did hope they didn't get the wrong impression. While he was helping them, it didn't mean he was sorry about anything. They annoyed him, so he roughed them up a bit. If anything, it was for the greater good, as it could serve to toughen them up some. Maybe it'd teach them a valuable lesson. Never try to start a fight you know you can't win. You can't get stronger when you're dead. He hoped said lessons would get through that thick head of theirs, though something within him doubted it. Still, who knows, they may prove him wrong.