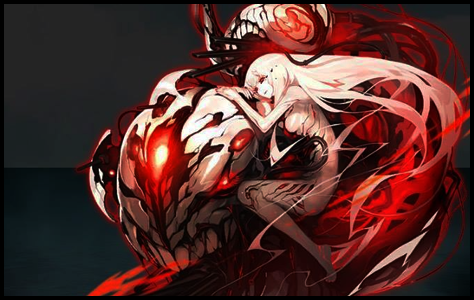 » Appearance: Varies due to their ability to shape-shift in appearance. They normally appear white-skinned with a crystalline pattern over their bodies, red eyes and long white hair.

PSYCHOLOGICAL ANALYSIS
» Personality: Goetia is a collective mind, making them prone to bickering amongst each other however only when interacting casually. In the field they function much better with something to do making it unwise to keep them idle and always planning or doing something so they do not fight amongst themselves childishly. Even amongst the collective though there is a dominant ego that wears the name "Goetia" as though it is their own, they are quite vain and obnoxious despite meaning well overall but getting along with them can be quite difficult.

BACKGROUND CHECK
» History: Goetia was created for the sake of espionage and sabotage, like a unit independent from most protagonist organisations that could insert themselves into enemy territory and function seamlessly to create strife and chaos amongst enemy forces. Goetia is named after the Ars Goetia, the index of demons supposedly created by the biblical king Solomon, they are a collective group of personalities and egos that derive from Chifuyu Yuudeshi to function as an independent colony and infiltrate enemy territory with a strong demonic presence due to them appearing to be as such.

STRENGTHS AND WEAKNESSES
» Crystal Manipulation: Due to possessing a crystal body they possess similar features to Chifuyu's own body, they lack the ability to use the hogyoku aspects however which is also due to Goetia being numerous personalities and Chifuyu feeling that would make it more difficult. Their crystal bodies though can be used raw material for the construction side of their abilities. Being made of crystal they can connect themselves to the ground merge with it to further increase their stealth capacity.

» Negligible Energy: Goetia lacks any real level of energy, usually they clock at around 5-5- in terms of energy power and are able to siphon energy off the world around them as needed such as for constructing equipment out of their bodies.

» Traditional Demon Physiology: They are recognised as demons in nature and have access to demon racials however they are low-end and at best they could have one advanced demon racial between themselves.

» Construction: Using their collective knowledge and a connection to Chifuyu they are able to access blueprints and schematics to create in the field which assists in sabotage and arming oppressed populations. They are able to make most of her technology with enough time however like most things Soul Evolution related the more time and energy they have access to then the more inherently powerful they become as a guerrilla warfare unit.