» The Storm Bringer: "I hear it calling to me, and I shall answer.."—Arkin The Immortal

With the renewal of his form to his prime, to be found worthy once more either by his own design or his zan, he has recovered an power long forgotten. He has recovered the raw ability to summon the storms to his aide. With this he has the unilateral ability to control natural storms of his own creation, or those which occur in nature. Should another storm user come in contact, or attempt to fight him for control, a struggle will most likely ensure for dominance. With this, comes the ability to summon lightning from his body as well are control the attributes of a storm.


» Ichor of Odin: "I am the son of Odin."—Arkin The Immortal

Arkin The Immortal's blood is something of a wonder, if you believe the idea his father was actually THE Odin told in history. This golden ichor which runs through his body seems to hold some supernatural properties within it, most likely being the source of many of his unnatural abilities. While it does grant him some rejuvenation properties, it isn't regeneration in the sense it can fix his wounds in battle. Rather, it will heal his body over an amount of time keeping him alive and youthful hence his moniker of Arkin the Immortal. The blood does not act like normal blood, and seems to burn up within seconds of leaving his body and even has the potential to burn flesh to the bone should it fall on unprotected flesh. Naturally, for those of the empowered nature this can be mitigated via durability or other abilities. It makes it particularly harder to kill the man, as his blood seems to has the natural inclination to not seep out often requiring more than normal violent force to push it out. For example, should he be stabbed the blade coming out will be covered with his blood, but the wound would not leak blood. Perhaps a droplet or two.

» Enter The Berserker: "A lunatic, a maniac, an unstoppable pissed off killing machine which seems to just keep getting stronger by the second. Crazy fucking bastard."— 11th Division Member on Arkin.

This could be simply how some describe the man but rest assured it is an ability, or that an handful of attributes in battle. Like the berserkers of old when Arkin can unleash his fury in battle gaining a number of increasing attributes. The first noticeable difference is the notable disregard of pain, rather the inability to feel pain, allowing him to fight at his full destructive capacity upon entering into battle. The second notable difference is a steady increase in strength, speed, and martial ability. The final difference is the more damage he sustains in battle the more potency he has to effect his enemies. It should be noted, this is can be a willing and unwilling mental state. Furthermore, it has to be actively noted he is tapping into this berserker bloodlust.

» » The Berserker Explained: The Berserker is both a metaphysical and physical state. There is a steady correlation between Arkin's rising anger and his inability to feel pain while entering into the berserker state. It isn't so much he doesn't feel pain but that his overwhelming rage blocks out the pain, allowing him to attack with his full might at a risk to himself. This is a fairly simple at bare minimum he will notice a slight increase of strength and speed by 35%, and at maximum should he enter into a blind blood rage he will see a 100% increase in those categories. With this increase in physical attributes there adds a level of risk, both of self harm and to his allies. The reason I do not add individual post counts, to account for the power increase, is because it's directly tied to the emotional aspect of anger it can raise and fall quickly. There is the potential to enter into battle in a blind rage, or to enter into fairly pissed off which would be more of a 50% increase. The percentage of strength when it changes, if it changes will be noted. The final aspect is the damage aspect, increasing the potency of his attacks, or rather the damage he receives from a enemy increases the effect of his attacks on that particular enemy. This is a gradual increase based of scaling damage, as in he needs to be hurt by that person. The hard cap on this would be 50% extra potency, meaning he has taken a large amount of damage relative to his person and would by this point at least result some torn muscles, extensive bruising, multiple deep stabs or cuts, or a broken bone. This, in totality, can add up to Arkin dealing 150% extra damage to an enemy at the cost of his mind and extensive damage to himself. The mental skill changes go into effect on 100% berserk mode.

» Wielder of Leviathan: The most basic ability his Zanpakatou is the ability for it to always return to it's wielder, with violent force to match. This means once he throws the axe, or should he leave it somewhere, the axe would seek to fly back to at a speed to match the power it was thrown with or a reasonable speed if it was left somewhere. This connection to his weapon runs deep, working anywhere so long as they are in the same realm. Should he be in another realm the weapon will remain immobile. But the moment it senses his presence it will seek to return to the wielder, once he calls to it. Furthermore, the Axe weighs a substantial amount but due to the metaphysical connection to Arkin it feels as light as a feather to him. To put into perspective the weight, it is as heavy as a modern tank further adding to it's hitting power.

» Pride of the Frost: The axe provides Arkin with some domain over ice, granting some unique attributes to him in his constant release. The first notable effect is his high resistance to cold or ice based elements, which only serves to be amplified when in The Berserker state. Instead of a unilateral control over ice, whenever he strikes something with his Axe it instantly begins to freeze over allowing him to pump more energy into the attack to amplify the effect. The notable thing about this power is that the ice effect spawns from the axe, and not from Arkin. For instance, him punching someone does not generate the frost effect nor allow him to tap into the ice powers.

» Frozen Malice: As state before when someone or something is struck with the Axe it begins to freeze so long as contact is remained, but there is a physical and metaphysical effect applied. For every strike applied by the Axe, if it is not counteracted somehow, they will begin to feel their self slow'd both physically and mentally. This effect is applied 10% per hit, and can be stacked six times. The effect begins to wear after one post of not being attacked, by one stack per post after that, the slow is capped at 50% on the fifth stack. The sixth hit applies a stun for one post, once the stun is done they are immune to the slowing axe effect for one post resetting it. This ability is however is not a passive and these 'enhanced' strikes should be noted in the post when the effect applies. The visual cue of this is ice forms on the axehead. 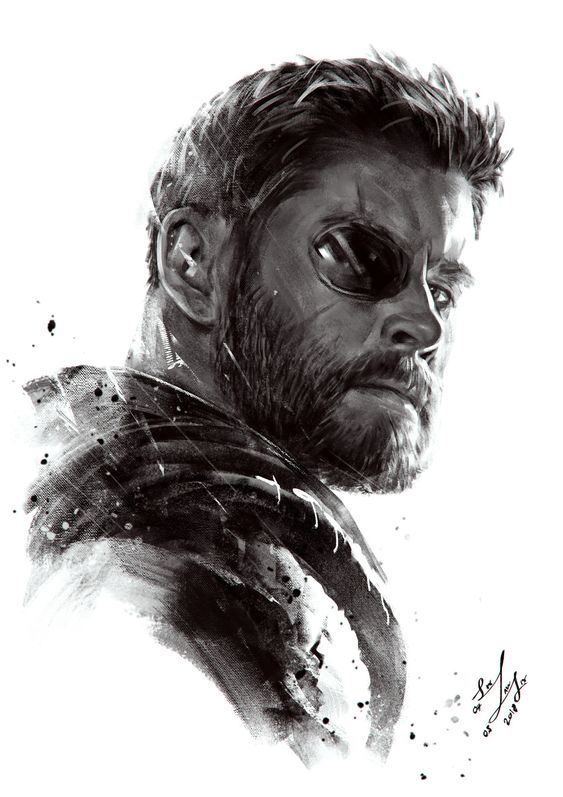 »The Atoner: Arkin The Immortal physically changes, brought upon by the tremendous increase in reiatsu and physical might. This change synergizes well with The Berserker, doubling the positive effects of The Berserker and his shikai abilities. He still has access to all his Shikai abilities. Due to this he was brought back to his physical prime, and is constant release bankai. He is now able to use his ice powers through his body, rather than solely his ax.

»The Gotei Standard: His Zanpakatou gains a new ability in this form brought on by his love of Gotei and belief in their cause. In his free hand a banner is made carrying the Gotei insignia, and while he fights with it's battle standard in the air he gains a buff to decrease the negative effects of his rage abilities. It brings to heel those more primal urges and rage urges instead replacing them with the only thing he cares for now: His New Family. Furthermore, if he plants it within the ground all allies to the Gotei gain a boost to their willpower raising it one skill level up to elite while it is within their sight.

The aspect of Arkin's powers that breach into the realm of storms. Within his bankai he is able to call forth storms, with each strike of his axe rings out a loud boom. The thunder marks the coming of the storm and inverts the typical thunder comes after lightning, instead he brings the lightning after the thunder.

Every swing builds up power inside Arkin, charging him like a battery before he is able to throw his axe into the sky and release all that pent up force into the form of a large bolt, devasting in power and able to crack the earth with such magnitude. Mechanically speaking every swing would generate about 5% of charge, so after twenty swings he would be able to activate this effect before it reset and he built up again

» Why: OTY wish, and to pursue the plot of becoming VC for seventh.
» Extra: [Anything extra to add?]

Permissions in this forum:
You cannot reply to topics in this forum
Who is online?
In total there are 10 users online :: 0 Registered, 0 Hidden and 10 Guests