THE HOLLOW TEMPLATE
Enter The Hollow
非再生可能
I. Basic Information 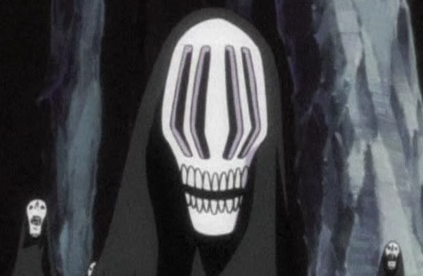 Cigarra is very much a standard Gillian class Hollow, with a long black cloak completely covering him wit the exception of the white mask that covers his face. Instead of the long nose and circular eye Hollows of a normal Gillian, Cigarra's mask consists of four vertical slits that are evenly spaced across the mask, the far left and right serving as openings through which to see through. In addition, Cigarra is a bit taller and bulkier than your average Gillian, a sign of his imminent evolution.

As Cigarra is still a Gillian-class Hollow, he is not yet fully intelligent like those of higher calibers of Holllow are. However, there are still a few distinctive aspects of his personality that differentiate him from other Gillians.

Cigarra is extremely methodical and patient for a Hollow of his level, preferring to hunt using a combination of his Sentido Sísmico technique and a powerful cero blast to snipe opponents from a long distance, only moving in to feast when they are fully dead. One can perhaps even call him rather lazy in this regard, perhaps an echo of the man he once was.

In addition to this, Cigarra is noticeably more intelligent than your garden-variety Gillian. While he is still a Gillian, and therefore limited in his ability to reason, Cigarra is able to set traps and under the basics of strategy to better hunt his targets.

Life of a wastrel:
The man that would on day become Cigarra was born in the late 19th century, at the zenith of the Gilded Age. The man's family were among the elite of North America in this new time of hedonistic vice and towering wealth, owning a chain of marble-clad banks that gave them more money then they could ever hope to spend. Their only child was pampered and given every privilege: the finest tutors, the newest fashions, his every wish made manifest and granted to the fullest extent possible.

As he grew, his family was torn between extreme pride and deep disappointment. Their son was an absolute genius, mastering calculus with the same ease as a lesser boy would learn how to ride a bike. However, his parents could never get him to really.....care about anything. Why would he push himself to quickly master skills or further his education when he already had everything he could ever want?

As the man grew into adulthood, he was forced to move away for university, graduating at the exact same time as his lesser peers despite his vastly superior intellect. He returned to New York, only to be handed the role of a banking manager of one of the larger banks his father owned. However the man, to put it bluntly, blew it off, often not even bothering to come into work for weeks on end, instead relaxing on yachts or sipping champagne in high-rise penthouses. He was a man completely without drive, as with every wish satisfied, what was one to reach for?

Upon the banking collapse in 1893, his family was just rich enough to lose everything, but not quite rich enough to survive the crisis. The man felt fear for the first time, watching his family's vat wealth dwindle to nothing as banking systems simply collapsed under pressure from the starving masses. The man and his family were forced to flee, far from the shining cities and stately mansions they had once known. The son who had known nothing but the finest food and most comfortable accommodations was forced to sleep in the dirt and eat travel rations. After weeks of running, they were eventually hunted down and killed by those they had wronged. The man's last memory was of a rusted knife descending, his body too untrained and weakened to react in time.

The cunning one:
The Hollow awoke within the depths of Hueco Mundo, hungry, starving! It took several minutes to find another Hollow to prey upon, and the newborn simply blasted it's challenger in the back with a powerful cero, killing it near instantly and allowing the Hollow to feast upon its steaming remains. For months Cigarra roamed the deserts of Hueco Mundo, not even bothering to make his presence known most of the time before it murdered it's fellow Hollows with powerful blasts from a distance or impaling them from behind with clenched fists.

Eventually, the Hollow came across a mass of self-canibalizing Hollows, all attacking and consuming one another in a feeding frenzy. However Cigarra didn't see the need to satisfy his constant hunger so....crassly. With a series of green blasts of energy, Cigarra collapsed the entrances and exists to the valley, killing several with the falling debris. The Hollow then methodically picked off those remaining, only descending to feed when every single one was dead. It took days to consume them all, and only when the last corpse was eaten did Cigarra feel sated, if only for a moment. His Reiatsu grew to a crescendo in that moment, his body growing incandescent as he ascended to the rank of Gillian.

The next several decades were time of growth and struggle for the newfound Gillian. Cigarra used his increasing power to hunt down his prey as he always did, methodically incapacitating them with powerful cero blasts before moving in for the kill. And it worked, the Gillian grew more and more powerful until his mask, indistinguishable from the countless amount of other Gillian, shifted, heralding his imminent evolution. However, the main consciousness found it harder and harder to keep to this strategy. The countless souls within his own drove him to find new prey faster and faster, and it was only through sheer force of will that Cigarra kept his seat as the leader of the gelsat consciousness.

Vibration Control -Cigarra is able to create and manipulate vibrations for a variety of purposes, from support-centered abilities to offensive firepower. Projected vibrations work best when transmitted through a solid or liquid medium (I.E. through touching brick or a body of water), although they can also work when projected through thin air, although their potency is lessened.

» Sentido Sísmico - Cigarro's most often used facet of his powers. The Hollow is able to pick up on minute vibrations through physical contact with a solid substance, and is able to extrapolate a three-dimensional map of his surroundings, even of things he cannot see. For instance, if someone was hiding inside a house and Cigarra activated this ability, he would be able to pick up on their vibrations and locate them. This ability initiallly has a range of 50 feet, with an additional 50 foot increase with every sub-tier (4-3 to 4-2) increase.

» Equipment: [If your hollow has any equipment? Put it here. If they don't, skip this section.]

Comments/Notes: My only commentary gets a bit complicated. His vibrations would pass through different objects differently. Ultra-dense objects like Vastanium and Auricalcum would nuter his mapping capabilites. As would fine objects like sand. reiatsu-enhanced materials would also, and possibly even stop it entirely based on the tier difference.
Tier: 4-5
Hazard Rating:F[/mod]