Re: Request a Zanpakuto Concept 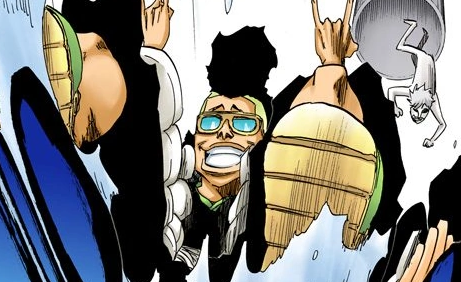 » Shikai Appearance: Her sword becomes a cleaver like blade with a jagged edge, as if the sword has been ground down over a rock and looks pretty poorly maintained.

» Shikai Ability: A melee-type zanpakuto which at a glance does nothing more than boost her power and allow her to cleave things in two. That is the superficial aspect of her zanpakuto, Hono's shikai has more depth than being a simple slasher.

[Creator's Note: Could develop other properties to enhance the "splitting" ie. slows regen upon splitting a target, ignores defences to easier inflict others. Get creative Waffles].

Shikai Weaknesses:
Durability: Hono's zanpakuto requires that she actually get the fragments embedded in a target in order for the shikai ability to work. If she cannot physically break through a target's defences then she loses a lot of offensive power.
Simple: A simple zanpakuto which is not incredibly encompassing, it is the single-minded will to overcome every obstacle in front of her manifested. In exchange for utility, it makes up for it with potency.
Indiscriminate: If by twist of fate the fragments end up inside of an ally, she cannot activate this ability without harming them as well as her enemies. Hono however, could develop and overcome this restriction through growth (even growing past the need to verbally order the fragments to activate).

» Bankai Appearance: Kazagumowari Ankūteimei alters Hono's attire, gaining a black haori which rests on her body over the shihakusho. It looks as though it could be an inverted colour-scheme captain's haori but it does not possess an insigna on the back, the kanji of the bankai's name is inscribed on the haori in a vertical line and glows red.

In her hands the shikai form of Kazagumowari remains but is stained black and the jagged edge is gone, instead looking as it should be and it is properly cared for.

» Bankai Abilities: The power of Kazagumowari is greatly enhanced with her bankai, albeit still a melee-type zanpakuto. In the same vein as her shikai it is highly potent but very simple, if she cuts you pieces of her jagged edge are left inside of you to fester and be activated. However, the bankai does not have a jagged edge. Hono in this form does not need to embed her sword into a target, she must simply slash her sword and the moment that she goes to slash her sword and it connects with a target it will feel as though there are two Honos in that moment.

A perfectly identical attack of equal power, speed and precision will be made and attempt to join with her own attack which relies on surprise and an opponent to overcome her zanpakuto's overwhelming power with their own in turn or to play around the fact that any attack would feel like she was cutting through both sides.

Bankai Weaknesses
Simple: Again, very simple but potent.
Single target: Unlike her shikai which can affect multiple people, her incomplete bankai is exclusively designed to attack one person and be the embodiment of her will to cut through that single obstacle that is in front of her.
Incomplete: No, this is not her completed bankai, it powerful but as far as a boost in power. It is lower than what one should expect to see from a bankai that has matured.

» Bankai Release Action: Hono drops her sword into the ground before the "sheathed" blade of Kasugomikiri Kazagumowari Ankūteimei extends to the size of a multi-story building from the ground and dissolves.

» Bankai Appearance: Kasugomikiri Kazagumowari Ankūteimei is the true form of Hono's bankai, shedding the haori that she donned previously, that haori takes it's true form. The sheathe of Kazagumowari which manifests as a giant black sword and as the blade dissolves so that she is left with the sleek black cleaver in her hand - it's sheathe manifests as a giant dark sky which overshadows the area around her (range based on tier). Along the cleaver is the kanji of the full name of her zanpakuto on both sides, burning bright red.

» Bankai Abilities: The final form of Hono's bankai, it does not change besides having the true boost in power that one would expect from a matured bankai. It is still functionally slashing and having the slash mirrored but with far greater potency due to the mature nature of this release.

It's true power is the final technique where Hono swings her sword towards the sky and splits the dark clouds above her. Triggering the final move where her clouds quite literally rend the particles in the area apart and form electricity as a result which is drawn along with all the black clouds down into her sword for her to deliver a final move which does not simply rend in two.

Being hit by her final attack is equivalent to every cell that makes up your body being attacked at once by Hono, to use this ability is so taxing on her body and zanpakuto spirit, that she would likely be hospitalised for a few days after using it unless her durabilty was beyond normal levels (above Elite) and her zanpakuto is unable to activate her bankai for three months after it is used.

Bankai Weaknesses
Timeout: Hono cannot use her bankai's full potential without fucking herself over. Look at me giving Hono a Final Getsuga Tensho move, hehe.
Simple: Same as before, simple and potent.
Single-Target: The bankai is reflecting the desire to overcome a single obstacle that could get in Hono's way. Cut that shit up girl, go straight for the boss man and skip the fodder.

Re: Request a Zanpakuto Concept

Sensei Gamma, master creator of the Zanpakuto, I come with a request.

Character Name: Hiroe Miyashiro
Concept: Hiroe, at least in the way I think I've played her is generally your classic, idealistic character, who while not having experienced the full scope of the world, frequently displays what can be described as a desire to strive for greatness, to see others blossoming alongside her, and protect her friends. If given the chance, even though she hasn't experienced conflict in the sense of fighting anyone to the death or even a conflict testing her will, I likely envision she'd still show a bravery and courage very reminiscent of your do-gooder Shounen Protag. Very motivated woman at her core when the right pieces come together.
Way of Life: Hiroe's way of life is one with a focus on determination, to keep going forward even if the road seems difficult. She doesn't really enjoy the idea or humor the concept of making excuses for herself and prefers to take what life has given her. To delve deeper, her way of life is also to prove to her family that she didn't make a mistake in pursuing a life in the academy and, eventually, by extension, the Gotei United. There are many layers to her but I feel these are the core precepts and traits that define her her way of life the most.

Small Note: I know you're a busy dude. To be fair, Hiroe's not yet at the part where she can develop Zan abilities but can know her Zan name now, so if nothing else, I'd love to see what your brain could develop even if it's just a name for now.
__________________