Oodas Slime
River Slime, Minatumi City
Oh! Brilliant! First, take shape and form as a humanoid! Oodas couldn't copy Ulv, however--that would be rude. Oodas would have to make their own form, be themselves, have identity! Now was not the time to confuse oneself with another, that would be disrespectful.

So, firrst things first. Actually take form as a humanoid. Slowly, the river slime went from a slimeball, to growing four appendages. Those appendages slowly took more accurate form by growing the shape of toes and fingers and elbows and knees. Then, a second ball popped out at the top, presumably a head. The slime ball body extended into a torso, and soon enough Oodas wore the shape of a human silhouette.

While energy already filled every molecule of its body, Oodas didn't often do much to extend that energy outwards. For now, it let the energy of its body leave just a bit, coalescing its humanoid shape from the outside. Then, quite suddenly, an epiphany came. Ulv's body was already basically largely comprised of water. All Oodas had to do, was use that energy escaping it, bring it back in, and manipulate the body to convert into organic matter. For this, Oodas would first have to create life.

In a moment, Oodas's body became a greenhouse, growing bacteria and cells at an accelerated rate. Gradually, these bacteria and cells started evolving, and within an hour, almost with a "poof!", Oodas's body had turned humanoid, entirely comprised of human physical features--except for functional genitals. Additionally, Oodas constantly produced stem cells being actively turned into whatever cell this physical form needed. Oodas also had smaller pores, as it never needed to sweat, and was in turn also blemishless, with skin practically glowing. Actually, literally glowing, as the incandescence from earlier hadn't faded. 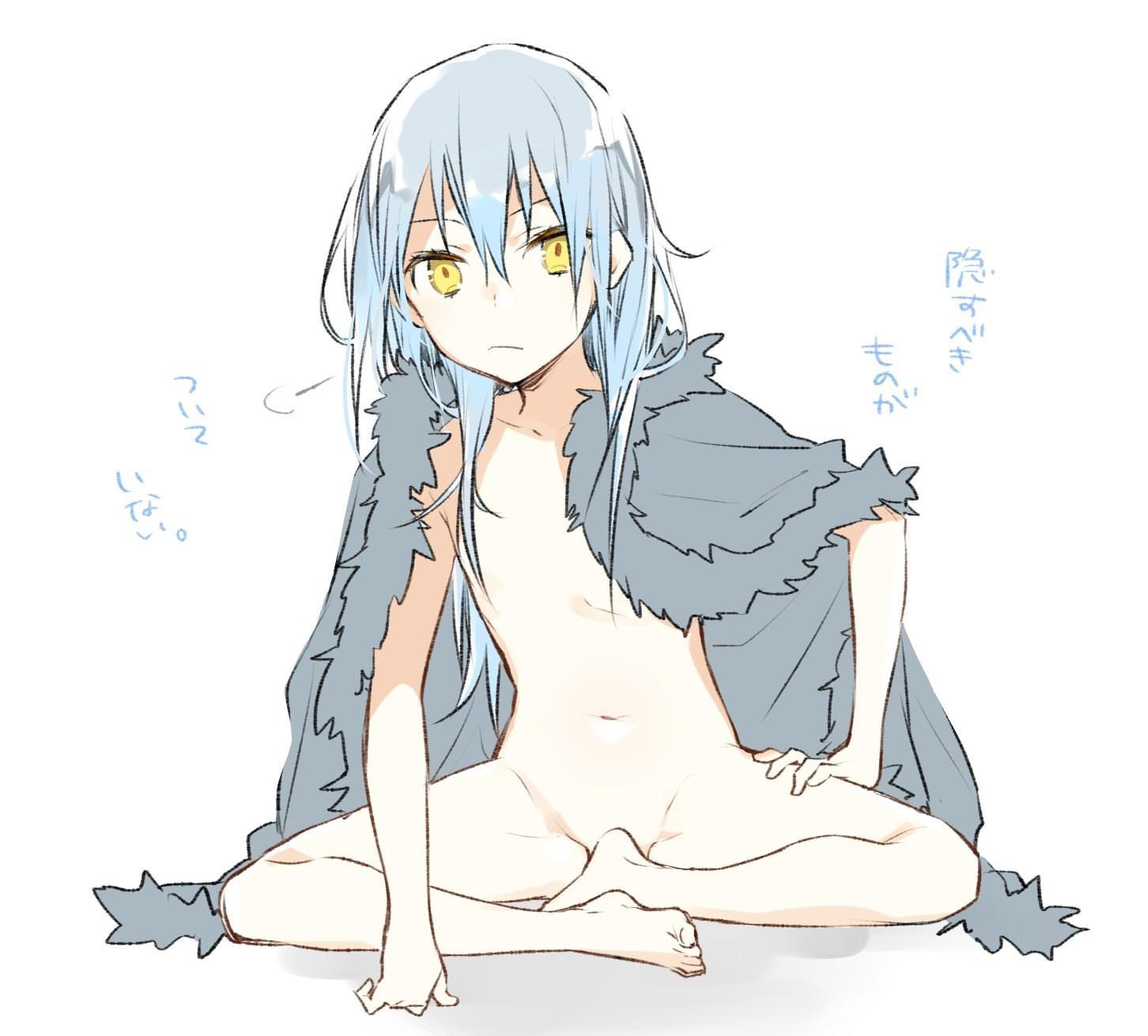 Ulv's patience was very variable. In this instance, she could sustain a thousand timeswhat she might in an instance that was not something she cared about as much. It was a strange thing, how in control of herself she was, and yet how fragile that control could be.

It took him a long time, but eventually and finally, Oodas did collect slimeself into a body that was just as indefinite and confusing as the one slime had before, but taller.
"Hmm. Well, you've succeeded in a technical fashion, so kudos to everyone. You've even got a mouth now"

Oodas Slime
River Slime, Minatumi City
"Wha--a mouth? Brilliant! A real mouth! A real, moving mouth! I can do so many things with this mouth!"

For the first time ever, Oodas could even emote! Swiftly, it must be put to the test! Oodas brought its new fist, one its never had before, and stuffed the whole thing in its mouth. Hmm. Flavours! Real, actual flavours! Oodas had tastebuds and everything now, too!

"Ulv, this is brilliant! You've been living like this all along, and it's incredible! I've been missing out on so much! What else can we do with our bodies? What do you do most often with it?"

Well, of all the things that one could do after they got a mouth, Oodas putting his fist in it was certainly an interesting one. But, she had cursed this world with slimey form, so now it was time to unleash it upon the world and see what calamities came from it. Just As Planned.

"Well, what I do with my form is I go meet people and talk to them. Not just in the harbour but all around the world. Having friends is the greatest thing you can do in this life, so I endeavour to do it to the absolute degree"

Oodas Slime
River Slime, Minatumi City
Ah, of course! Make friends! Make merry! A beautiful mind, Ulv had. One with clearly all the answers. It made Oodas want to ask even more questions, but the polite and very smart slime put a rain check on that. Mmm, yum, rain. Oooh, anyways. Polite and smart slime, indeed--one that had propriety! To not ask too many questions. Speaking of asking questions.

"What else, Ulv? What do friends do together to have fun? I know of having fun as a ball and as a slime, but I know not the wonders of having fun with a human body! Oh, tell me, are we friends now Ulv? I'd like to be friends with you, now that I'm like this."

All the while, Oodas continued to poke at itself, pull at itself, and all in all inspect every nook and cranny of itself. It even squatted down and leaned over, putting its head over its crotch to poke at it. Ulv had a sort of divot here, but Oodas had none. Should Oodas acquire one? Or would that be mimicking Ulv too much. Oodas couldn't intrude on the space that comprised Ulv's identity, after all. That would be disrespectful, and Oodas was a polite and smart slime, with propriety.

"Something's missing here Ulv. You had a divot, but is that something that's unique to you, or is that just a human body sort of thing?"

"Ahh, finding out what you do with friends is part of the beauty of having friends. Everyone is different, everyone has fun a different way. Find the way and you'll find the fun with the person. As for friends with me, you are indeed friends with me. This entails much greatness but also spectacular waiting times because I'm super friends with a trillion other people and time must be split accordingly" She would nod seriously. And then, when Oodas asked about the divot, Ulv just shrugged.

"Ahh, reproduction. Basically how you make a smaller you, if you are a human. Nothing you need to bother about"

Oodas Slime
River Slime, Minatumi City
Most interesting. Fun is different with different people. It seems like, apparently, Ulv has fun just waiting, and Ulv has so many friends that they have to wait with tons of people. What a formidable ally with the strangest of tastes. Well, Ulv had her fun--it should be about time Oodas had their fun, and that fun needed to be explored and discovered! Fun in a humanoid body... perhaps, the things Oodas did for fun in their gelatinous form was fun as a human too.

"Alright, Ulv, do you want to have some fun with me! I know you and I have different ideas of fun, but by trying mine, you might come to like it too! Let's go, to the ocean!"

Oodas then looked at their own hand, squeezing and extending its fingers out in curiosity and wonder. Soon after, Oodas reached over and went to grab Ulv's hand, aiming to pull her along to the ocean for some fun.

Well, she had some time to play with the slime. Or rather, she'd headbutt anyone who came to tell her that there was a schedule to her life she had to follow. She never played well with schedules, even after becoming a Mayor who kind of really needed to be schedule'd. So, when she was offered, and then grabbed onto, Ulv mentally shrugged and followed on with him to his fun.

"I am always down for learning new ways of fun. Lead the way, Oodas!"

Oodas Slime
River Slime, Minatumi City
Osu! At the speeds of a Tsunami, Oodas went racing towards the beaches of Minatumi Harbour, and once arriving at the shores, Oodas literally went all-in on the dive into the water. Even while in a humanoid form, it was essentially instinctive to absorb the waters it swam through, and there was no issues posed on the body, in terms of either water pressure or breathing--despite having lungs. With Ulv presumably right behind, Oodas went straight for the nearest dolphin pod. If Ulv stayed, then the whole day would've been spent swimming amongst the wild life, wrestling with giant squids, conversing with sharks and sperm whales, and occasionally apologising when Oodas absorbed a few schools of fish.

The whole day went by with nonstop interactions with the wildlife in the down-under. Though Oodas had no need for sight, once the sun was setting, Oodas wanted desperately to leave the ocean to look at the spectacle. This was, after all, the first time Oodas had eyes.

Right by the pier, gazing off into the sun setting right into the ocean's horizon, Oodas sat still in the full nude taking in the scenery.

"Is this what humans do every night? Take a look at the big star in the sky setting while the Earth's satellite takes over?"

Swimming. Ulv used to swim a great deal, but that was mostly looking for Screaming Shells. After losing her Dantian, she didn't do it quite so much, so it was nice to take a relaxing break and just do that. While she did need to breathe, her powerset made it a none-issue to stay under with Oodas. And then the day ended, and Ulv was standing on the pier with him, holding a shark she had grabbed for dinner tonight. Despite the size of the shark, she was holding it slung over her shoulder easily, like she had grown considerably in height.

"No. People are very wrapped up in their lives, so they rarely take the time to look around them. It's unfortunate, but part of being alive"