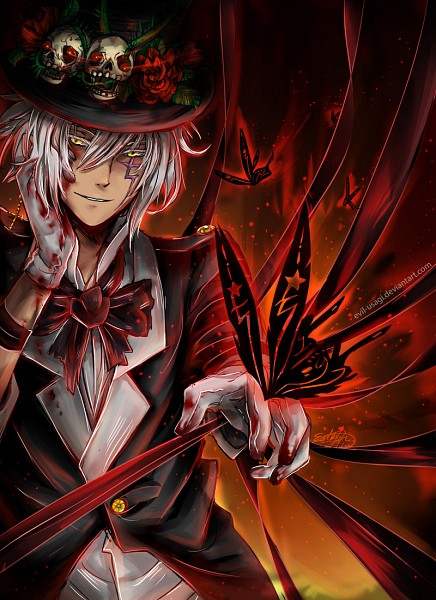 Kuro did not respond to whatever was on his mind, even when she started clicking the fingers in front of himself. He was far too focused on something else; her existence was unable to distract him. Snap! Snap! Snap! Still, the man did not respond; he was completely lost within his own mind, despite the intense look on his face. From the way his back had staightened, it was clear that he was not trying to mock her. He was completely absorbed in whatever was on his mind.

"…My name is Kuro." At that, Kuro proved that even while her thumb and middle finger were sliding off one another, he could not completely ignore her. The way she responded to his question was full of fire. For the first time, she captured Kuro's focused attention. She could feel that focus put on herself, now, while he began to rattle back at her. "…I am the Captain of the Stealth Force." He answered the first, not bothering to mention how such a thing should have been obvious, especially given his links to the shadows.

"…I'm its Captain." That should handle why it was the fastest. There was more than just that to the answer, though. "I will be able to pick up the slack myself if you can't handle it." He finished, before leaning forward in his seat. His eyebrows were drawn back, contemplating her. His hips shifted to allow a more comfortable sitting position, his size seeming to increase as he did so. "… My squad is… the least afraid to do what the Gotei needs. They get in the most danger. We are the best because we have… the best." He explained passionately, finally letting himself begin to lean back. "…At least, up until me. My job… is to keep them being the best." He finished at last, his eyes still locked on hers.

If she had more questions to ask, this seemed to be the time to do so. She had his full attention, after all. Ikiya Fumitana
Artist: - Song: - Word Count: N/A
Ikiya tried to hold in her enthusiasm. It sounded like a cool squad, but Kuro sounded like they are trained elites. I’ll have to see for it myself, this sounds like my own cat call. She held an idea above her head, that ties in her need to keep her activities swift and on the low. Perhaps, I can use the stealth force as a means to gain some form of type of techniques that allow infiltration. Ikiya was beginning to conjure up a plan that could have a successful outcome. Ikiya is going to use her time wisely if she decides to join the stealth force.

It could also give her a chance to meet more faces, as she stayed and hone her skills. She was focused on choosing the right decision. Looks like the gotei will have a cat burglar on their hands. Ikiya licked her dry lips, in a way that made it feel like she was enjoying the opportunity she was given. However, she shouldn’t get ahead of herself. Ikiya didn’t want to assume that she’ll never get caught. It wouldn’t be fun if she could slip past everyone, without someone noticing. She’d only find it boring. Ikiya leaned back against her seat and rested her head on both of her arms, as they meet behind her. It was as though she looked like a villain who came up with a striking revelation.

“What are some people you know? I’ll gladly join if it's worth the effort. I’m a bit curious about the results.” It was her own way of declaring that she’ll join Kuro’s squad. Ikiya held high hopes that her time there, will be fun and worth her time.

Kuro's attention on her dimmed a bit when her arms reached back behind her head. He relaxed as well, his focus drifting away from her while she processed what he had said. His chest slowly raised and lowered, his arms limply set on either side of his body as he waited for her to reply. …Yeah. That's probably a good expression… He thought to himself as her tongue poked out. That kind of hunger was just the kind of thing that cemented his certainty that this was the path she would want to take.

"…I am a captain…" Kuro thought aloud to himself, his right hand moving to his torso as he calmly undid each of the buttons on his white shirt. His fingers wrapped into it, slowly opening it so she could see the large, angry scar that dragged along his body. There were others, dozens of them, but they utterly paled in comparison to the nearly foot-long mark along his chest. Kuro's eyes found hers once again, and she could see the slightest edges of a grimace forming there. "…Tsubasa Unabara gave me this. That's one…" Kuro released it, leaving his chest still slightly exposed behind the buttons. "…I know Henrex… Though he's not a captain right now… and the other Captains… And…" Kuro's tone drifted off, as if he were remembering something but could not quite grasp it.

In the back of his head, he heard the sound of rain again.

"…And my squad." He finished, leaning back in his chair. If Ikiya had any awareness of the last few years of Gotei activities, she would know both of those men. Henrex was a Shinigami of incredible power; Tsubasa Unabara had power like that as well, but was much more notorious as a fallen Captain Commander.

"…So." He stopped, looking right at her, waiting for an answer. If she had any more questions, now was the time.

Ikiya Fumitana
Artist: - Song: - Word Count: N/A
It was worth asking a hundred questions about what type of squad and the people, Kuro knew. She needed to know what she is getting herself into. Questions are a number one priority! It’s something like she had written on the back of her hand. Ikiya didn’t worry about if she was harming him with a lot of questions. To her, he didn’t seem to be bothered by it. Meaning that he wasn’t being annoyed by her motor mouth. As she awaited more of her questions to be answered. Her eyes were forced to cover themselves by her hands.

Her hands were just shy away from her face. Warn someone while you are doing something, Idiot--That’s just gross The scars he attempted to show, didn’t deliver a good response from Ikiya. It was quite obvious what type of reaction she would have, when it comes to scars and disturbing looking bruises on someone’s body. I don’t want to see your collection of scars you couldn’t even avoid. She noticed how much of a beating this guy took. Maybe if they were even stronger, he’d have to be dead. Ikiya couldn’t picture herself in a situation where she would have to endure the pain.

She held her hands down a bit, until he started to mutter other names. That, Henrex guy sure is popular. I’ve heard some stories about him. Her eyes would soon be lowered and appeared to be disappointed. They could just be exagrations, because those girls love to talk a storm about who’s the coolest and hottest. Ikiya scoffed and listened to what more, Kuro had to say. “I’ve heard about their names, but they are just stories, until I see them for myself” She sounded like she didn’t appear to be impressed by their public image and how much it left, Kuro in stitches. She left it at that with a simple arm crossing below her chest. “But i’m ready to get this started, whenever you want to leave”

While her constant barrage of questions did not annoy him, they did not particularly excite him, either. He was just doing his best to weather the storm of her inquiries. She did not seem particularly interested in the evidence that he tried to show her. ..Better get used to sights like that… He could not help but reflect on her squeamishness. All in all, that part concerned him most. She was going to have to lose that gut reaction if she were going to be successful.

Particularly if she trained under him.

Kuro's eyes narrowed. He kept answering her questions, but she could feel that pressure from before. Something about her reaction to Henrex seemed to have irritated him. He was not giving away how annoyed he had become, but she could certainly sense that her scoff had been ill-timed. "Guys who respect great power, are the same one's that can wield it." Kuro told her directly, before contemplating her arm held beneath her. It was almost as though she were bowing. Kuro reached a single hand out on the table, picking up her plate and bringing it down on top of his. At last, his eyes relaxed completely, and met hers once again.

"Alright, then. Get your paperwork done… and once your things are done being moved, I'll find you."

With those words, his body began to sink beneath the table, down into the shadows it cast on the floor. Before her eyes, the man kept sinking, and sinking… Until at last, the Shadow Shinigami was gone, leaving her with the dishes to clean up.