ATONEMENT FOR THY SINS

Hime knew it wasn't about the money but she didn't enjoy the idea of disturbing her sister's day. She had always wanted to visit her but had never gathered the courage.

The remorseful woman had always wanted to reunite with her sister but something held her back. Feeling as if she had no place here, there was no reason to approach Kirio. She was better off thinking Hime was dead but in the end, none of that mattered now.

Face to face with the woman who once admired her, Hime could do nothing now but to stand up and face this head-on. She had resolved that if it failed, she would simply protect her sister from the shadows with Abalia's assistance. If it succeeded, then she would fill a hole and mend the wound that had persisted since the day everything came crashing down.


"I know. I apologize for speaking in such a state of panic... but I needed to have your undivided attention."

Hime cleared her throat and moved the meal aside. She wasn't particularly hungry in any form or fashion. Ulv could have it for all she cared. What mattered now was fixing what she ruined.

"My biggest fault in life was always what I shattered between us, how I allowed myself to be so vile with my jealousy that it tore us apart. I have never forgiven myself... and that led me on a path I regret ever having walked. I stand before you as a woman who has lived as a murderer and as a woman who wishes to atone for her sins - including the one between us. I always wondered why I hadn't died after being struck by your fists." Hime continued to gaze at Kirio with nothing but a firm conviction in her eyes, even though the tears continued to fall.


"To this day, I never knew what my purpose was in being alive and I never feared the thought of dying, of repenting for my sins through being executed... and yet, I have been spared and accepted in spite of it all. The one who spared my life is one of the most fearsome women in Soul Society. Abalia Kyoraku. On top of that, she promised to ensure that your safety and protection would never be in question. To be honest, I have no idea why but... I don't want to let it be wasted. I don't want to run away, anymore..."


"I know I have no place to ask of your forgiveness. I simply wish to remind myself of what I lost. For now and forever, until the end of my days, you will always be my one constant. When my days were arduous or tiresome, you never cared about anything other than my wellbeing. You loved and idolized me and followed my example. You never competed with me. From the day you were born, you had always supported me and when you were old enough to be an adult, you merely wished to stand beside me and enjoy my dream with me."

It hurt to admit that she had ruined such a beautiful thing but nevertheless, expressing herself was such a liberating feeling.


"Like a fool, I was the one who never saw your aspirations for what they were. You never wished to soar above me. What you wanted was to be what I never recognized you as... my beloved sister. I love you, Kirio. I am proud of you, even now, just as I should have been proud of you back then. I miss laughing together, cooking together, and openly expressing how much I loved my beloved little sister. If there is even the slightest possibility I have a chance at that, then allow me to say I apologize. I apologize for the words I said, the way I reacted, and what I ruined. Because what we shared brought me the greatest joy of my life..."

Listening to the two, and yes eating all the food while they spoke, Ulv was feeling happy at the whole thing. Until Hime went and dropped the Hayden part of Abalia's name like it was just meaningless fluff tacked on. Serious though the situation was, Ulv wasn't able to just let that one go and flicked her eyebrows as Hime came to a close in her speech.

"Dropping the Hayden part, aye? Woman's not married at all. The swelling belly is just from overeating. A diet will fix that right off" Ulv's sarcasm would, hopefully, cut through the tension of the situation and make it less awkward for the pair of them to have snark from the corner of the woman who had eaten enough food for three in the time it took Hime to finish speaking. 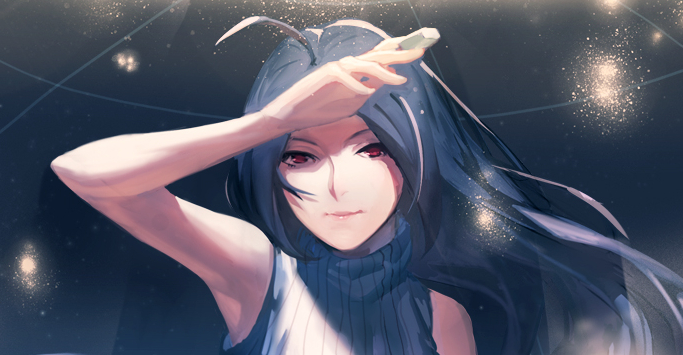 Kirio clenched one hand into a tight fist, looking out the window after she had heard everything Kirei said. She had to think about all of that, but one thing she knew for sure was that she didn't like hearing anyone talk like this. Though they were hardly close enough to be considered "sisters" in the sense of their bond, there was a degree of warmth in Kirio's heart even still toward the woman before her. Hearing her speak that way caused her no small amount of distress.

"It's never been about the past for me. I never held a grudge. I thought you were dead all this time, Kirei, and all I could think was that I hadn't done right by you. That I'd killed you without giving you a chance to become something better."

She knew the name Abalia, knew the woman who bore it. It had always surprised her to see the dutiful baker reach the heights she had, but that was hardly the focus on Kirio's mind. Still... if Abalia was the one watching Kirei, then she would be in good hands.

"All I wanted was to make you proud. That was childish of me, you know. Living my life just so you would love me, like you didn't already. We both made mistakes, even if yours were worse."

There wasn't any meanness in that last statement, it was a simple truth. Looking back to her sister, Kirio kept herself from crying, though her eyes were certainly just a faint bit misty. It was still more emotion than she tended to let herself show, and she didn't mind that.

"Don't apologize. Just...do better. I'll do the same thing. We can improve together."