In the time of need [Leviathan/Ulv] 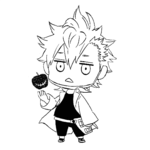 In the time of need [Leviathan/Ulv]

Leviathan Shihōin had found himself in the wonderful place of Minatumi Harbour. Why was he here? That was too see the great mayor of Minatumi Harbour, Ulv Auber. Like many in the soul society, he had heard stories of her incredible prowess and also stories of how she had helped many progress past their inner turmoil to get to greater heights. Leviathan had a lot of inner turmoil after his parents death and with no one to really call upon to help him deal with it. This leading to him feeling unmotivated to get to know others and to better himself as he doesn’t find himself worthy. Maybe the woman could help him regain some of his motivation.

However he didn’t really expect her to help if he was completely honest as she didn’t know him but hey, he had to try something to better himself. He didn’t want to feel like this for the rest of his life cycle. Leviathan decided to ask the people where she might be, maybe getting a general area of where she might have stayed. “Might you know where Mayor Ulv is?” He spoke to the random strangers on the street, hoping one would know where she might be. When asking he was only met with people thinking he was a child or ignoring him all together. Honestly, he hated being around people because they always mentioned his short he was but he’d think about that one a bit later. “Just where could I find you, Ulv” he mumbled to himself as he wondered just where might the mayor of Minatumi be hiding. If he was lucky enough, maybe she would find him.

More strange refugees looking for the mayor to tell their story to. The citizens of the city understood her benevolent actions, but the reality of the situation was grating on all of them when one felt entitled to something over the other. Human nature came out regardless of where one was. As such, the young kid looking for the mayor was mostly ignored by people who had had hundreds of children come up to them and ask for the Mayor.

However, eventually Leviathan would ask a person that would give him some attention, though not quite answering his question. She looked strange, in the full length, black dress, silver mask across her eyes and long blonde hair.
"Hmm. What would a person like you want with the Mayor? She is a woman not to simply be sort after for personal gain"

Leviathan’s quest for ulv was somewhat successful as he came upon a strange looking woman dressed in black and a mask over her face. She didn’t really answer his question actually answering his question with another one, which annoyed him a tad bit. However a pang of guilt hit him when he heard her speak because she was right, as powerful and important person Ulv was, he didn’t have the right to ask her for something like this, he didn’t even know what she looked like but she was one of the last options he had. He could find no one he could speak too or help him, even his own family after the death of his parents leaving his guilt and depression grow even worse.

“While I understand your words” Leviathan began as he looked at the masked woman, “I simply want the chance stopped being chained by something that hangs over me” he said with a bit of sadness, it was the first time he had openly admitted to be tied down by the constant thoughts of their deaths as his fault. Despite coming out of his five year hibernation and rejoining the Gotei, he felt that he couldn’t grow beyond his current understandings. “So is there any chance I may be able to speak with her?” He asked with a rather apathetic voice now, he didn’t want to make this into an emotion breakdown, at least not yet. The neon haired boy just looked at the woman as he waited for her response, hoping for something he might like to hear.

"And this, of course, comes off the back of a several month persuit to better yourself and to talk to the people close to home. Your own clan and the numerous Captains, Vice-Captains and other auxiliary workers of the Gotei" She replied. Clearly, this woman had met Shihoin before, being able to pick up Leviathan's heritage from his reiatsu.

"You've braved countless perils, had rejections from everyone you could ever go to, and now in despair you come to the only woman that you could ever get help from. To, like thousands of others, beg her aid in helping you reclaim your life and become all you were meant to be with but a simple word and a pat on the head"

Leviathan interest was peaked when the woman spoke of the Gotei as he had yet to tell the masked woman who or what he was. Did the woman know him somehow? Or more like she had read his reiatsu signature and let her know but to even call out his family let him know that this wasn’t her first time meeting someone from the Shihōin clan, what other members of his family did she know? But the real question to be asked is just who was this masked lady? However at the same time the woman’s tone and words angered him a bit.

It angered him because she made him think, did he really just come all this way for some words from a woman he didn’t know? “Maybe it was a mistake coming here for selfish such reasons” he said as he looked to the ground with a blank stare.

"The only mistake in the world is the one not learned from" The woman replied, gently putting a hand on Leviathan's head and stroking it. Her hand was warm and gentle, and felt like it encompassed his body like a hug from a mother.

"Seek aid and friendship from those who are closer to you. Do not go overseas to find someone who can give you the aid your squadmembers can just because she is famous. It sends a bad impression. And Ulv is not a woman to casually befriend. She is an Inferno that burns eternally, and there is few that can stand that, forever"

”The only mistake in the world is the one not learned from” the woman’s words hit him a bit hard as she lay her hand on his head. A feeling of warmth and gentleness spread over him as she patted him, calming some of the nerves he had just worked up. Was this just him or was this the abilities of the woman’s? Either way it went he was glad to be met with some kindness despite his selfish request.

When the woman spoke of seeking aid closer to his home Leviathan gritted his teeth just a little. Due to his upbringing as one of the “misfits” of the Shihōin, he hadn’t really wanted to talk to any of his family or Gotei members. If he asked himself why, he couldn’t answer as he didn’t know why but he had some kind of dislike towards his own people. He really had to get his mind together.

“Thank you for your words and maybe someday I’ll get to meet the inferno for myself” Leviathan said as he looked at the woman with a weak smile, she had helped him a lot despite him not knowing her name. Wait, he didn’t get her name? It was weird to be talking deeply with a strangers whose name he didn’t know. “Before I go, may I ask your name? Mines is Leviathan Shihōin.” His name wasn’t something he normally wanted to tell others but he though this was a different case

Another kid solved. It wasn't that Ulv didn't want to help them, but she didn't want to cultivate a reputation of being run to as the first choice. People needed to learn to stand on their own two feet and accept the support of friends and family before going to a stranger.

"It is a pleasure to meet you, Leviathan Shihoin. I am Tvilling. If you most desperately seek Ulv, she isin the Seireitei commonly. But do not dismiss others for her. She is not that kind of woman"

“I thank you for time, lady Tvilling” Leviathan said as he bowed to the lady. While it wasn’t his usual action, he knew how to respect someone who helped him , even if it was indirectly. After he finished with his personal matters, he would definitely need to find out more about her. “And I’ll make sure to remember your advice about Ms. Ulv” the shinigami said as he smiled and turned towards the exit of Minatumi not wanting to open a Senkaimon in the middle of a street.

Although he didn’t get what he exactly came for, he felt as if he was leaving with something better. It wasn’t a pep talk from some other person he didn’t know, it was real life advice that put some things into perspective for himself. Meeting and talking to Tvilling was just the beginning of a long, long road for him but as long as he remembered her advice it would be worth it. ”The only mistake in the world is the one not learned from.” Leviathan turned to Tvilling one more time, a slight smile and waving before disappearing in a flash of Shunpo.