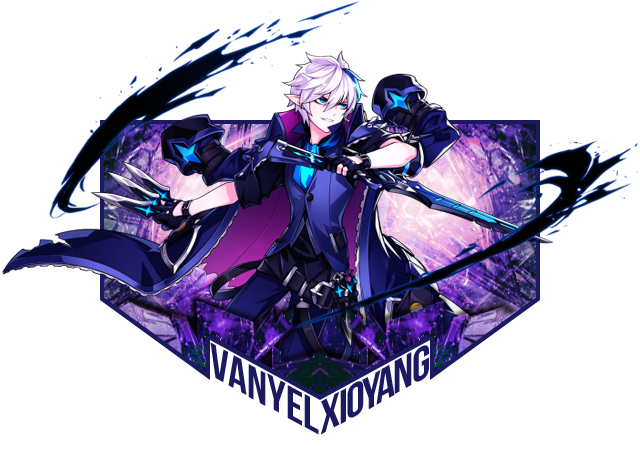 Almost immediately after his attempt to stab her, he found himself immensely regretting it. Flames burst to life on Corrosion Cloud, causing him to drop the weapon, with it shifting back to the base form of a black cloud, returning to his side as the flames gradually died out. Even the strongest attack he currently had in his arsenal didn't seem to have done anything as Calypso emerged from the dust in a new form, burning bright and beautiful.

Vanyel's head just lowered, gritting his teeth in anger as he pulled out Kuro Komo again, drawing his arms back in order to bring the sword down toward Calypso's head, before he suddenly stopped in place, getting an actual answer from her as of what she wanted from him. She wanted him to...be happy. He figured she just wanted to beat him up as revenge for what he did to himself, and yet, she wanted something like that from him.

It genuinely stunned him silent. What did she even mean by that? His arms slowly began to lower as he started to speak, before being promptly cut off:

Before he could finish his train of thought, however, Calypso had picked him up by the leg and hurled him across the field, sending him rolling across the ground several hundred feet before eventually skidding to a stop. Groaning and slowly getting to his feet, Vanyel took a few seconds to dust himself off, holding up Corrosion Cloud in his free hand and taking a guard stance after he had finished.

Calypso would be slowly walking towards him from the horizon, listening to his absolutely fucking ridiculous answer to her statement. That only flared tempers more, causing her to suddenly dart forward and grab him by the shirt. The sheer intensity of emotion within her blackened eyes would have melted his soul if not for the equally intense level of care shimmering in them. Her hands tightly gripped his shirt, to the point tension could be heard, as she reared a fist back, teeth bared, and screamed,

Wham! She gave him a good licking on the face as she let out a huff of frustration. If there was any attempts to make her let go or get off, they would get ignored, she was wholly focused on knocking some goddamn sense into this man,

"You AREN'T okay! There is stuff wrong with you, HURTING you!"

Another punch would come, however this one was much softer than the initial punch, as her breath seized, tears of darkness continuing to messy her face,

"And.. I'm not okay either. But at least i'm brave enough to fucking admit it and try to fix it..! I'm literally fighting through illness to HELP YOU you MORON!"

The darkness dripping from her face seemed to lighten just a bit in volume as she spoke, darkness slowly relieving her eyes of their presence as she hit him one more time, however this time was merely a slap,

She sniffled, her voice choked with a sob as she put her face in his shirt, "..So just please, let me in.. Let me in so we don't have to be alone in these feelings..!"

Watching her slowly approach from the distance, Vanyel took the time he thought he had in order to formulate a plan and try to figure out what she'd do next, only for her to close the distance in an instant and grab him by his shirt, screaming in his face and causing him to flinch slightly. Just as he opened his mouth to respond, she punched him in the face. His eyes widened in surprise, his head forced to the side for a moment as he spat out a small mouthful of blood before turning back to face her. His lip was split open, his head was swirling around slowly, blinking rapidly as the dizziness set in.

He shook his head, trying to keep his footing from the sudden hit. He turned his head to face her, reaching up and wiping his mouth off, which only caused blood to now be sloppily smeared across his lips and chin.

Before he could finish that sentence either, she punched him again. Thankfully, this time it wasn't as powerful and was easier to recover from initially, but after that, he stayed silent, waiting for another punch, each time she paused between her words -- but, in the end, only a single slap came, and at that point, he wasn't even fazed by it.

Saying that out loud only made a growing, sickening feeling begin to ferment in him. Hearing Calypso's voice break and hearing her start to cry once again, Vanyel slowly brought his arms up and pulled her into a gentle embrace. Part of him wondered if she would be able to help him understand this...this strange maelstrom of things within him. Maybe understanding it would allow him to make peace with it. He didn't know what to do.

He had lied to himself for so long, that now, he actually believed it.

Though tears ran down her face, she didn't give in to the old time desire to fall apart. She needed to be constructive, and help him. She was about to go at him again for denying that anything was wrong, but was stopped when she felt his embrace. She took a sigh, closing her eyes, and focused; He was lying, but.. She didn't sense fear or guilt or embarrassment towards his own words. With that, she slowly came to realize,

"..Oh my god Vanyel, how long have you been lying to yourself?"

Her voice was shocked, almost, as the realization came to her. His behavior only made any sense if he genuinely believed that he was fine, even though he just, wasn't. Now the question was, for how long was he feeding himself delusions, and what caused this? She gently placed her hands on his chest, sighing softly as she pressed her forehead against him. Just a few moments of silence, until she suddenly did something upon impulse; She sudddenly yanked Vanyel closer to her level, placing a kiss on his lips. While such a sudden act of passion would seen out of nowhere, the corner of the man's eye would likely catch a flourishing of purple energy as she held him in a kiss. His wounds would be forced to heal rapidly, the Asthavon slowly leaning off of him as she stared up at him, eyes filled with a tired look, and some of his blood on her lips.

She rose a hand, rubbing the blood off her lip, and raising a hand to wipe his own face,

"..Vanyel, I want to help you, so you can be happy. Can you give me even the littlest, ounce of trust to that?"

Calypso's response was met with silence. His eye twitched slightly as he processed what she said. He didn't want to answer. He was fine. There was nothing wrong with him, and she didn't need to fix him! He wasn't some broken toy that she needed to glue back together!

HE WAS FINE! NOTHING WAS WRONG WITH HIM!

Calypso could sense emotions, right? Was...she right? Could she see something that he couldn't? No, that couldn't be right -- he knew there was nothing wrong with him, so she couldn't be seeing anything like that, right? Before he could contemplate it any more, Calypso quickly yanked him down to her level, pulling him into a kiss.

The human went wide-eyed, though he didn't fight it. It...felt surprisingly nice, kissing her. His arms went limp at his sides and his face turned red, too stunned to take note of the purple energy coming to life, only for the kiss to suddenly end. Still wide-eyed, Vanyel looked down at her, a hand raising to wipe her mouth off, only for her to take care of it herself, and wipe his own lips off. His hand instead rose up and touched his lips, still unsure of what to think.

Why did she do that? What did that mean? Why...did he enjoy that?

His legs shook faintly, and he sat down, hand still on his lips as he turned his attention to Calypso again. A torrent of countless thoughts and emotions swirled in him, and yet, without words, Calypso would be able to sense acceptance from him -- finalized with a silent, soft nod, his lip quivering and his body trembling. If he was honest, he was scared. He didn't want to do this, but...right now, he felt safe, that he'd be ok if he told her.

Now, having taken the first step, it would be up to Calypso to help him along the steep, rocky path he had decided to venture on.