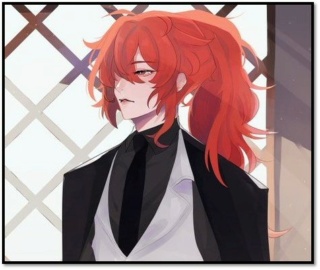 ALASTAIR EISFLUCH | OFF DUTY
Alastair raised a hand to scratch at the back of his head, considering how his own situation looked through her eyes. He was left to wonder what might have transpired if he had been opposed to his parents' choices rather than diving wholeheartedly into the world. Would one of his sisters have taken up his life? Looking back at the childhood he had, he felt a beat of arrogance as he doubted either of them could have managed it.

"I was the eldest son, I suppose, and that meant that I was the first choice. My family would not have been content without at least one inheritor, and I accepted that role."

It was a curious tradition to look back upon now. Had his sisters truly been placed behind him solely on the merits of his gender? Some of the finer matters of nobility were often lost on him, though he was still a devoted son, but this felt personal.

"In hindsight, I never stopped to consider if they could or not. I assumed it was a matter of choice, and that they simply did not wish to follow."

SOPHIE GEISLEITT
She was not a feminist or someone that considered her sex as anything she was tightly attached to. Though from experience of having it as such a cause of strife as to make her feel neglected from getting as many opportunities it was annoying that she heard him mention it, she shouldn't judge or anything though. He probably had no say in it and she wasn't going to hold him accountable for tradition, being the person who cared a great deal of judgment based of merit it did slightly bother her.

"I understand. How sweet to volunteer to spare them being forced into such a situation. I am glad I took the route of a quincy, it isn't a choice I've ever regretted. It's afforded me a lot of opportunity from the little world I used to know."

She smiled and sipped away, wondering about the older sisters of Alastair. What type of people were they did she wonder?

ALASTAIR EISFLUCH | OFF DUTY
He felt the subtle change in her tone, and grew slightly more concerned that his words might have irked her even though she was nice enough to bury it behind a measured response. Such was the unspoken politics of the first date, a careful dance as he tried to skirt along the thin line of interest without tripping too many flags.

"I do not regret the choice either, not for a second. Becoming a Quincy, joining the Vandenreich, those choices set me on the path towards where I am today."

The quiet flame of passion burned through his cool exterior, not exactly enough to be overbearing but it certainly showed against his usually calm demeanour. A momentary candle against the dark. Another sip of his drink and it was snuffed out.

"I think it is rather clear that we both like what we do, which is always a good thing, but what made you opt for a position in the Albedochiffren?"

It wasn't that he harboured any displeasure toward the administrators, they certainly kept everything running behind the scenes, but he would not mind a little insight into her choice. She had experienced combat in America, just as he had, but their paths had diverged since the end of the war.

SOPHIE GEISLEITT
"That's good. Weighing yourself down with regret restricts avenues for the future."

She never looked back and got weighed down with regrets even if she was selfish in doing so. Sophie was a pretty selfish individual but she tried to remain considerate of it. If she sat around hating herself for being selfish when she did alright with it, it wasn't like it had ruined her life or anything.

"I chose Albedochiffren since it lets me do the most I think I can for the Vandenreich. Adminsitration of the more beaurocratic areas of the organisation are just as important as the frontlines, resource allocations and planning as well as infrastructure. Someone's got to maintain the City of Lights, right?"

ALASTAIR EISFLUCH | OFF DUTY
It was good to be selfish, to a reasonable extent. Alastair had concluded as such many times when he reflected upon his life, and it was pleasant that Sophie spoke with a similar intent. He had been selfish in becoming a Quincy, as had she. Others might claim to have played roles in their decisions but they had primarily been their own, as far as he understood it.

"Of course, someone should always 'keep the lights on'. I do not mean to devalue the bureaucracy of the Vandenreich, I simply noted earlier that you had mentioned seeing combat in the war. It is, perhaps, an uncommon pairing but maybe you are just that talented."

He shifted in his seat, eyebrows raising a little as he finished the last of his drink. He wasn't subtle enough to mask that his comment was genuine, but a few of those comments were to be expected so he might get away with it. With a nod to the now-emptied glass, he looked to Sophie's own.

"Would you like the same again, or was there another cocktail that caught your eye?"

SOPHIE GEISLEITT
"Not particularly, Well, I don't think I am talented. I only fought on the frontlines due to it being a wartime scenario. However, as a member of Albedochiffren it's not uncommon for us to be working with other sectors for a more personal understanding of circumstances. Papers and documents can only paint so much of a picture after all, Alastair."

It hadn't occurred to her that her drink was almost empty and she gave a small smile while sipping the last of it down. There was a thoughtful look while she considered another one, it was pretty rare that she drank nowadays but she wanted to let her hair down a little. First date in a while and all that, might as well have some fun.

"The same if that's alright."

Reacing for her purse and grabbing out some more change, Sophie was sure to hand it out for him to take.

ALASTAIR EISFLUCH | OFF DUTY
"Very well. I will be right back then."

He stood, taking a moment to straighten out his shirt, and fished his wallet from the pocket of his jacket. Stepping around the table, he plucked the change from Sophie's hand and the pair briefly touched as his fingers crossed her outstretched palm - which drew the faintest of smirks - and then vanished back inside the restaurant.

After a few minutes, Alastair returned with a pair of Lichtheims. This time he had elected to place his trust in her judgement, she had enjoyed it enough to order it again so surely it was a fine selection. He set the first of the drinks down in front of his companion, before taking his seat across from her and settling his own glass down.

"Forgive me, Sophie, but I wanted something a little more refreshing before we eat. The Sturm was certainly a fine entree, but one is quite enough."

He laughed lightly and picked up his glass for a first taste, satisfied with the burst of fruits, he let his posture relax again as he made himself a little more comfortable.

SOPHIE GEISLEITT
So began the waiting game when he vanished, giving her a moment to reflect and she thought it was going alright. She hadn't made an error yet she thought and that was nice to know that she hadn't lost touch with the game after her time submerged in work. It could be much worse, she feared that she might end up treating it too business-like or mess it up somehow.

It caught her off guard when he came back and apologised, immediately jumping to reassure him that it was fine. Being lost in thought while he was away made it hard to figure out what he meant by it before she understood and grinned. Now that was weird to apologise for, in a good way you know.

"Thanks. I suppose, I'm not a fan of strong flavours personally. My coordinator does enjoy them though."

ALASTAIR EISFLUCH | OFF DUTY
Alastair had not meant to surprise her, but perhaps it was good that she was letting her imagination wander. She certainly seemed pleased enough by the whole exchange so he just matched her smile and continued.

"Speaking from recently gained experience, it is quite an acquired taste."

There was no need for any further pretense to it, he had picked the drink on a whim and it hadn't exactly been an instant hit for him. There was nothing else to it really. Pretending to be something he was not would hardly have been a good foundation.

"What else are you not a fan of? For my own curiosity, of course, and perhaps future dining considerations."

Was it crass to consider a second date before the first one was even nearing a conclusion? He supposed so, as it certainly made him come off as keen, but equally, he was genuinely curious.

SOPHIE GEISLEITT
That was quite a smooth little way of his to ask her about what she wasn't fond of she thought and then lead in with the bait for another future scene. Now wasn't that quite a cheeky little move but Sophie liked bold people, that much had already been made clear with their current date. It did make her think about it a little bit though, what she disliked that is.

"Hmm. Don't really know off the top of my head. I suppose you'll need to navigate carefully for the future."

Hiding her uncertainty with a tease instead to tickle his brain in a way that would probably be the cause of some stress later. It's okay though, the best rewards were the ones that had a lot of work behind them. It's the journey, not the result and stuff like that. He was eager though, wasn't he?

It occurred to her that she might be his first date, Sophie did wonder if it was true or not. She wouldn't ask though even she knew that such a question would be pretty inappropriate and rude.