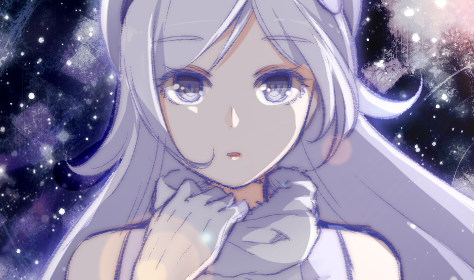 Psychological Analysis
» Curious: Aria is a curious person, she will always be open to learn something new and aggressively tries to understand something when it's put in front of her. A puzzle is her greatest enemy until she beats it. While she is incredibly curious she does not need to breakdown that new thing she is exposed to until she understands it from the most basic point unlike her mother. Aria is quite content just knowing about that new thing or make a discovery.

» Spoilt: While you can try and say she is not, which Aria will also agree with such a sentiment. Aria's most definitely a spoilt child and always wants more, whether that be being allowed to see Earth and see what that is like or just monopolise her parent's time and resources for her own fun and games.

» Childish: It would be disconcerting if she was not childish for someone so young, Aria is very innocent and ignorant of a lot of things. These traits are emphasised by the fact she is not really exposed to Earth and it's population. There is debate though as to how much of her childish nature is genuine since she will occasionally have a strangely mature moment and then be confused why everyone is surprised.

» Sweet: Aria's a genuinely sweet person, if someone is upset then she'd try and cheer them up. If someone is in need then she would try and help them, even if she knew the fact of that situation was that she was only giving money to a homeless man for him to spend it on more alcohol. She is an optimist and believes that even if they will do wrong with it, it doesn't change the fact she isn't going to be a cynic about it.

» Peculiar: She is an alien, literally and figuratively. She does things weird sometimes and she says strange things. There are lots of human things she doesn't understand about people and the planet. Things surprise her which are normal to people, rain for example was a shocking thing to experience.

» Wonderchild?: It is unknown if Aria is a wonderchild or not, despite the fact she acts like a child. Her parents are keenly aware that there is far more depth than she lets on. Aria is able to listen to her mother talk to herself about advanced calculations and scientific concepts and not get confused, seeming to get what she is talking about most of the time despite the fact she tries to pretend that she doesn't. She picks up skills very easily when she actually wants to learn.

Because of that though there is a distinct level of being distrusted by people due to being unable to tell if she is acting about a lot of things or she is being genuine.

BACKGROUND & PURPOSE
Aria was born in the year 2020 after she was born to Valentine Ransom Carter and Chifuyu Yuudeshi. Since then her body has remained on Mars but after much pushing and demanding she has eventually been given some small freedom to be allowed to travel with her mother and be closer to her father.

I've been playing her as a little extra for some of Chifuyu's threads thus far that I might as well app her as an NPC.

POWERS AND ABILITIES
» Possession: Aria's body on Earth is not her real body. The body that she interacts on the planet with is derived from Chifuyu's own body, due to that a lot of her powers are sealed due to her main body being on Mars. Due to the semi-sharing nature of a single body with her mother, her body's General skills will be the same as Chifuyu's own General skill sheet. She does not have access to Chifuyu's hogyoku body aspects though which makes her unable to apply them nor can she make use of her mother's Soul Evolution due to her martian heritage making it difficult to utilise.

She can however do basic manipulation of her crystal body as she pleases. Aria is able to see and interact with the spiritual world only by merit of Chifuyu's body, due to the fact she is possessing parts of Chifuyu's body, she could technically generate spiritual energy but any energy she would generate is kept by Chifuyu for other matters which means she does not generate spiritual energy for her own use and she exists at 6-0.

» Spiritual Foreigner: A trait specific to Aria regardless of her mother's body being what she is using, Aria's foreign nature as something born of both Martian and the reality warping nature of the Hogyoku means that she overrides the ability for supernatural energies to affect her to the same extent as her father.

» Water Communication: A standard practice among the Martian people, Aria is able to use what would best be described as a form of empathy, using water as a medium. She is able to infuse thought into water. Upon drinking from any source of water, she is able to place a specific thought within it. This may be something as plain as a message, or as vivid and detailed as a specific memory. Once this is done, this message will lie in wait within this source of water until such time as the intended recipient drinks from the same source of water. This source of water may be as specific as a glass of water, or as vast as the Earth’s collective oceans. The only thing that matters is that it is a single, continuous mass of water. Should a body of water be completely destroyed in some manner (evaporation, consumption by one besides the intended recipient, etc.), the message is destroyed alongside it.

THROUGH THE POWER INVESTED IN ME...
« Application Checklist »