MAKOTO ARIMA
"I probably should, I did all my routines before you came."

She was usually pretty tired just by merit of how much she worked herself, tonight was no different except that usually instead of having a nice night like this it would just be more of her brutal routine. At least this felt far more therapeutic and comfortable. Makoto did wonder how Shishiyuki was going to sleep, it wasn't like she had any nightwear for her that'd fit.

Well, it was Shishiyuki. She was clever and would figure something out while Makoto let go with a final squeeze and stroke through her teacher's hair and went to go start setting up for bed and letting her think about it.

Makoto's squeezing her was admittedly a bit surprising, though not especially unwelcome. Small gestures of affection did feel quite pleasant for her, particularly when it was in this situation. She was rather glad to be here with Makoto.

Naturally, Shishiyuki began to undress, not terribly embarrassed about it. After all, this was her student, was it not? There was nothing to be embarrassed about, and it was not as if she were simply wearing nothing at all to bed. That would be rather improper, wouldn't it? Even moreso in a situation such as this.

MAKOTO ARIMA
Makoto was honestly quite distracted while she worked on preparing for bed, even getting her shirt out and turning around to head for the bathroom to change except there was something very different and caught her off guard. It almost made her fall over from shock if she didn't have greater control over her body than that.

She didn't say anything about it though, well she might as well just get changed here and so she did that. Though she made sure her back was to Shishiyuki while she got dressed down until she was just in her shirt and underwear. It'd definitely be weird if they were both naked, in the same bed and with everything else in her head.

Water, she needed water and something to clear her mind. It felt like an appropriate thing to do while coming to terms with what she had just seen. It was a lot to process and sleep would be nice chance, right? 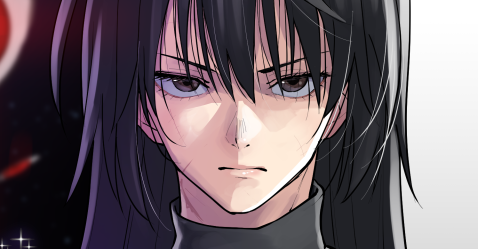 KOIZUMI SHISHIYUKI
After she'd suitably disrobed, Shishiyuki removed her hairband carefully, setting it aside for now as she let her cosmetic kido come to an end. Maintaining them was not especially difficult, and in fact she had become so adept at it that she could keep them up without any conscious effort at all. However, it was best for the sake of her own ability to rest if she simply dismissed them.

There was little else to do now, admittedly, beyond loosen out her hair and wait for Makoto to be finished readying for the night. Her eyes certainly did not wander, seeing as there was nothing that she was terribly interested in seeing at present. Ah well, no matter. She ought to try and put herself into the mindset of resting.

MAKOTO ARIMA
Back around she turned again and considered turning around for another drink of water. She was fully aware of what she looked like without the use of her glamour but it didn't change the fact that she was ill-prepared for the sight, just focus and omit the fact. She'd seen naked people before, plenty of times whether for necessary means like verifying an identity in an autopsy or on the battlefield when people's bodies were gored and maimed.

Those were a little different from this situation though and those bodies meant nothing to her.

She told herself it was fine while she got closer, it would all be fine and that she was just going to sleep. Even if she was getting all flustered at the sight didn't mean it was because she was a woman, it was just her teacher. Though, that didn't help her feel any better about the situation, at least it would be nice right?

Makoto said, crawling onto her bed while laying down. It wasn't a big bed, she hadn't got it for multiple people and she had guessed it'd leave them pressed against each other a bit. It was what it was though, now she just had to try and settle herself down and sleep.

KOIZUMI SHISHIYUKI
Shishiyuki noted as well that the two of them would be a bit pressed against each other, but that was not too terribly concerning for her. After all, she had slept in far less favorable conditions during her time with the Onmitsukido and the like. This, by comparison, was a paradise.

Laying down alongside Makoto, she realized she had perhaps underestimated things just a touch. But, even so, it was not so terrible. She supposed she ought to help Makoto along, to relax and be as rested as possible. So, naturally, she leaned over, just enough to give her a kiss on the forehead. People generally appreciated that, yes? It would be one matter if it had been on the lips or some such, but this was hardly the same sort of gesture at all. She offered those sorts of things to many of the young ones in her household regularly.

MAKOTO ARIMA
Her breathing got just a tad higher, faster and shallower at the kiss on the forehead. It was relaxing though but it did make her much more focused on the fact that they were in bed together, not very dressed and all that teasing and talk they had engaged in from the night didn't want to go away from her thoughts.

She closed her eyes and tried to sleep, even though she was not finding it. Laying on her back and at the ceiling seemed like the move though it was feeling harder to sleep as a result, she was too busy acknowledging the situation that she wasn't settling. After some time, whether or not Shishiyuki was still awake or not, is when she gave up, yawned and then she rolled over and cuddled into the other woman to enjoy the feeling of having someone she trusted to not hurt her and instead make it feel like the exact opposite to settle her.

KOIZUMI SHISHIYUKI
It had caught Shishiyuki a touch by surprise, when Makoto cuddled into her. She had not expected such an intimate gesture, but she would not push the woman away, either. She supposed, given her lack of trust, that such warmth was something she had lacked in her life for a long while now.

If that was the case, Shishiyuki would have been remiss if she did not do her best to correct that matter.

As Makoto cuddled into her, Shishiyuki adjusted to the matter carefully, wrapping an arm around her gently to offer her all the more intimacy in this moment. That was what she desired, was it not? Perhaps more pressingly, that was what she deserved.

MAKOTO ARIMA
When she woke up it was getting close to dawn, she slept pretty well. Makoto hardly even remembered if she had nightmares or not, probably not since she'd usually wake up sweaty and gross after episodes like that. It stood out to her that she was the only one here now, it definitely wasn't a dream though. Makoto wasn't in that much denial that it felt like it could've just never happened.

She crawled out of bed and yawned, she would've been up earlier than this normally. There was an assignment in the upcoming hours and it left her a bit of time to get ready and tackle other matters. It gave her a little surprise that she had not been disturbed by Shishiyuki leaving, though she wasn't too shocked at the idea that her teacher was so talented in many areas.

Her arms wrapped around herself for a moment when the blanket was pushed back. She had to get dressed for the sake of not feeling cold and the things she wanted to get done before having to leave. At least it was a refreshing sleep, right?

It also occurred to her that she had forgotten to give Shishiyuki the ribbon, well that was a bother. She'd do that as well before she left. It was a pretty tranquil morning though, one of the better nights she's had in recent memory.

KOIZUMI SHISHIYUKI
It was almost strange, how well rested Shishiyuki felt this morning. She could not particularly say that she had felt so relaxed in quite a long while, but all good things must come to an end eventually. Knowing fully that it would be taken quite the wrong way if anyone were to see her leaving her student's quarters, Shishiyuki had deemed it the best course of action if she were to simply return home under the cover of night, her own abilities of subterfuge more than sufficient between her mastery of kido and the myriad techniques of Ichibyou Senkuka.

Of course, she had not simply left without any indication that she had been there at all. The thought had resonated with her even after she had awoken that, if she wished to have something to remember Makoto by, then perhaps she ought to leave something in turn, that Makoto might take with her. As such, on Makoto's table their would lie a simple white hairband, without any fanfare and with no note. Shishiyuki knew quite confidently that she would understand.