FUUEN
The first thing that greeted Fuuen upon his waking was the smell of burning sugar, and he found it so generally unpleasant that he could only sigh in faint displeasure as he removed the discarded clothing from himself and sat up slowly to look at the Captain. It was uncomfortable, of course, but he was not one to lay down longer than necessary in her presence.

"I hope some results have come up?"

There was not exactly much of what one would call hope in his voice, but Fuuen nevertheless felt it prudent to ask her as he redressed himself. It was no easy feat, of course, but still, he managed. Walking around in nothing was not what he would call an ideal circumstance. 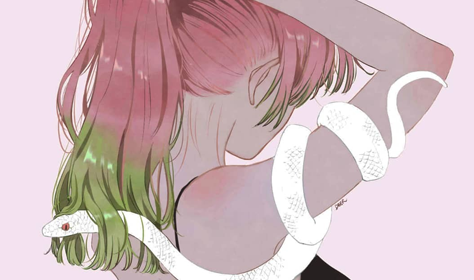 She fingered the sword in her hands, even if the blade cut her it wasn't like it mattered when her body was the way it was. The looming figure of her over the sword made her stare at him for a bit before she broke the silence. It was hard to gauge what she was thinking about. Did his unique composition make him taste different? That was the thought on her mind.

"Hehe. You're weird, really broken. You're like Abby except it's not like you're half a soul with holes in it. You're just defective... though your other half is right here in my hands. You're more like a symbiote... a parasite? No, just organisms mutally feeding off each other."

The absurdly long sword moved from just being teased with her finger to pulling it up to her mouth to give it a lick. She wondered if he had sensation feedback, though maybe just the knowledge that this sword was a part of him and she was licking it was enough to make him sweat.

Gamu teased while leaving out the part that would probably be the more pressing thing he cared about. The memory issue, then again, she thought that'd be wrapped up in the whole being a broken soul. There seemed to be a lot of those lately, didn't there?

FUUEN
Fuuen's eyes fell to the sword that had served as his perennial companion, and though he did not feel it as Gamu licked the blade, he nevertheless found it rather displeasing. Her description of the situation was one that he did not fully understand, though he also could not say that he found it entirely surprising.

"I see. To what degree is this a defect? I do not imagine this is a common occurrence, though I am unsure of how this would then relate to the issues of my memory."

There were any number of ways that it could have related, but Fuuen was not a scientist, and he certainly would not pretend to be one. Much as he disliked putting any more faith than necessary into this woman, she still had the knowledge of the situation that he simply could not have.

Gamukira | Bubblegum Monster
He did seem unhappy with her actions, good. It was the whims of the strong to do as they pleased and the weak to be good little sheep. Gamu just tilted her head to the side with a cheeky little grin aimed at him. The long candy looking hair moving with it like a curtain behind her.

"Well you're meant to reincarnate. Go through the soul cycle, you know but you don't. So you're like a jammed cog that won't move forward physically and your mind is going off. I wonder if you'll eventually just become an empty husk of a creature without any sentience but the body still refuses to keep going."

She posed the possibility at him and grabbed the blade to point the handle at him to take. This was useless to her, at best she might try to eat it but the organic ones tasted so much better. For the moment she reached into her pocket and pulled out a gummy to toss into her mouth and waste no time chewing. It was a trick she learned from her Abby, don't chew 'em and swallow 'em whole immediately so that they sufferred long.

She really was the best.

FUUEN
"Ah... I believe I understand."

While he understood, that didn't necessarily make it any more clear to Fuuen what he actually could do about the matter. If anything, he found that the explanation he'd been given was only more difficult to parse than before. Meant to reincarnate?

"What am I able to do to remedy this matter, if anything? I would rather obviously like to prevent myself from reaching such a pitiful state."

Everything about this Captain made Fuuen all the more discomforted, but if only by merit of her having assisted him, he would not allow that to show. He owed her that much, he supposed.

Gamukira | Bubblegum Monster
"Well, I guess you could die. Then you'll pass on and all will be well, you'll reincarnate and all that."

Gamu was entirely nonchalant as she expressed this sentiment, thinking only of the most effecient way but she had the feeling that he liked the way he was now. Didn't he? What a drag, she ought to just finish the job here and get it all worked out.

She might've been that nice, if it was a member of her own division. Unfortunately, his status as being under that other anomaly of a captain really would come back and bite her on the butt and Abby wouldn't like that, though it would be quite a thrill to get those piercing eyes focused on her again...

"Oh, other ways to settle your affliction. Hmm."

FUUEN
Fuuen suspected there was not the slightest degree of humor in the Captain's intentions as she made that suggestion. Not to say that he thought she would find no entertainment in it, of course. If he had to guess, he imagined that she would find the outcome of his death very amusing.

"Yes, I would rather prefer not to perish. There is still a fair bit I intend to do."

It wasn't necessarily that Fuuen was afraid of the Captain, per se, but he was certainly aware that he was wholly at her mercy at the moment. More concerningly, he knew all too well that she would likely be willing to kill him without much remorse.

"If the issue is that I am already intended to reincarnate, then would there be any method of potentially circumventing this necessity? I am unfamiliar with the more elaborate mechanics of reincarnation. I do not fully grasp the difference between, for instance, myself and the spirits who live in the Rukongai."

It was exactly that which encouraged her next actions, the ones were she really decided that he must not need her help because if he had things he still needed to do then he'd totally figure out his conundrum.

"Cheating death, wow that's a pretty big ask. If I told you the answer to that though it'd be a way too easy of a thing wouldn't it? Ehehe, like isn't it way more fun if you figure it out for yourself."

Gamu leaned forward like the predator she was to encroach a bit into his field of view, just a bit more. The more of her that filled his sight over the room they sat in, the better as far as she was concerned. Gamu really had to wonder what he'd do when given the information that she wasn't inclined to help him, would he beg? Accept it? Try and negotiate? Oh she loved it when people tried to talk their way out of her.

FUUEN
"Idleness merely worsens my problem. To be proactive is the only course that would be reasonable, I would think."

There was something about Captain Kurotsuchi's answer to him which felt wholly unsurprising, in all actuality. Perhaps it was simply the levity with which she had treated this whole affair, or perhaps it was nothing more than a natural assumption based on her character. However, as she leaned in toward him, her aggressive nature still quite apparent, a few thoughts crossed Fuuen's mind.

Realistically speaking, what did this hypothetical question tell him? One of two things, based on what little he could glean regarding her character. The first was that this was indeed a simple enough task that she felt it was not worth her time or effort, and rather than tell him as much directly, she had chosen to simply toy with him. The alternative, however, and the one he expected might be more likely, was that even she was not entirely certain of the answer to his quandary. Given her clear sense of superiority, he might have anticipated that she would lord her knowledge over him a touch more, but this was almost less than he'd have expected.

Well, either way, he certainly wouldn't be asking her to confirm his theory.

"If you insist, then I suppose I won't argue. I ought to be on my way then, hm? If there is a solution to this problem, then I'd best begin to search for it."