Where do they find all the Paper? [Asami/Shuten]

Where do they find all the Paper? [Asami/Shuten] 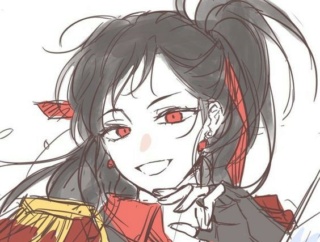 Furukawa Asami | OFFICER OF THE 5TH
Document after document of papers had continued to pile up at the 5th Division headquarters over the past months, a stark change of pace from the more clandestine periods of the past few years. One might dare to wonder if the Division was understaffed, as extra hands from the 1st had been taking on some of the excess work, but still, they persevered. Asami was no more exempt from such burdens than any of her fellow officers, so she spent most of her days splitting time between the ceaseless bureaucratic struggle and keeping on top of her Zanjutsu training.

Today had been a day for the former rather than the latter, much to her chagrin - though she would never admit to such. But, as the workday drew closer to its end, there was still a stack of reports that she had to take to her Captain for review and assessment. Captain Shuten was not exactly someone that Asami knew all too well, even though she was now her commanding officer, as they have not served together for all that long. Still, they had continued without any particular discourse as both were seemingly dedicated enough to their work to push on regardless of circumstance.

Tucking the paperwork - consisting of half a dozen documents split evenly between a pair of folders - neatly under one arm, Asami left her own office and headed off in search of her Captain.

Eventually, she found her way to Shuten's door and rapped her knuckles against the woodwork. It was a polite rhythm, three swift strikes that were loud enough to alert any occupant to her presence but a far cry from attempting to knock the door down.

"Captain Suika, it's Furukawa. Daily update left me with some documentation that I need your seal of approval on."

Her tone was soft, polite as can be for when she was dealing with official business. Showing her respect for her superior whilst maintaining an air of formality.

Re: Where do they find all the Paper? [Asami/Shuten]

Song: N/A - By: N/A - Word Count: N/A
Frankly speaking, the division technically was understaffed. Shuten was the only commanding officer, missing a lieutenant of her own. Perhaps one of her newer members could become the lieutenant she needed; or perhaps not. Frankly speaking, Shuten had no idea exactly what to do in this situation. However, thanks to the help of one of her seated officers, Furukawa was her name, along with the assistance of the first squad, most of the built up paperwork had been taken care of; most of the remaining paperwork was less ancient and more of modern concerns; ones that could be taken care with greater ease. Frankly speaking, it was something that gave Shuten some cause to relax, and feel relatively proud of her squad at this point in time.

Because of such cause to relax, Shuten was more than happy to drink deeply from her sake dish. It was likely an unnerving habit to her squadmates who did not know of her heritage; especially the horns that grew from her head. However, Shuten never let such things bother her; by now, it was completely natural for her to experience it, especially after how she grew up in the Rukongai. Soon, however, there was the rapping of knuckles against wood, and a voice broke through the door to Shuten's office. Her purple eyes stole towards the door, still drinking sake as she listened to the request. After a few moments, she placed her sake dish down and called out to the woman who wished to enter; the seated officer she was thinking of previously.

"Of course, Furukawa. Come in, please. We'll sort through all the paperwork promptly."

After Furukawa came in, Shuten gave the woman a warm smile, and a nod, gesturing for her to take a seat on the chair across from Shuten's own; on the other side of her desk. As usual, depending on how familiar Furukawa was with her captain, she would likely find nothing surprising about the large, blue, sake gourd that was standing behind Shuten's desk; accompanied by Shuten's Zapakuto. Of course, her appearance was likely another feature to be shocking; but the horned woman was still Furukawa's Captain. In the end, her appearance would be nothing odd in the long run.

"Please, take a seat. You may as well sit and relax somewhat while we get all of this paperwork taken care of."

An 'S_E' Made Template :copyright:

Re: Where do they find all the Paper? [Asami/Shuten]

Furukawa Asami | Officer of the 5th
Entering the Captain’s quarters at the sound of a response to her request, Asami took a moment to take in the surroundings. She was far from well acquainted with Shuten, though she was the only Captain that she had served under since her return to the Gotei they had remained distant for a while. Not to the level that Shuten’s appearance gave her any form of a visible shock, Asami knew what she was in for in that regard at least - even if it was a little obscure. The gourd and Zanpakuto, the sight sake and the scent of it that lingered in the room like it never truly left even after consumption, those were also things that she knew of and still maintained her composure.

She took the offered seat, laying the folders across her lap so they needn’t yet clutter Shuten’s desk, and attempted not to look alarmed at the volume of sake that her commander was consuming in such a short span of time. The last thing they needed was to lose another officer here at the 5th, just when it seemed like they had gotten on top of all their predecessors paperwork.

Despite her concern, the Captain did at least seem rather cognitive so Asami straightened out the top folder and flipped open the cover. She sat up in the chair, back arched forwards slightly, as she scanned the inside of the top cover to suggest she was less familiar with the details.

“First up: Three separate incident reports from the outer Rukongai, all relating to different kinds of gang activity. I want to get out there to investigate further, boots on the ground and all that. We’d be asking too much of the local Sakutaiso to leave it to them.”

Closing the folder again, she turned it about and offered the documents out to Shuten in case she was interested enough to read them herself. None of them were particularly detailed, though each did refer to a neighbouring district on the very edge of Soul Society and the incidents ranged from vandalism to petty theft. Hardly anything groundbreaking, but enough to perhaps turn a head or two if it continued.

Permissions in this forum:
You cannot reply to topics in this forum
Who is online?
In total there are 15 users online :: 1 Registered, 1 Hidden and 13 Guests