Where the Sun's Always Shining (Alistair/Kegare

KEgare chuckled softly and leaned back in her seat, listening and nodding along as Alastair went on, explaining that he was INDEED enjoying himself. That was certainly something to be glad about. She drummed her fingers lightly, closing her eyes as she mused over his little inquery at the end there. "I'm glad to hear yer enjoying yourself. Too often young lads like yourself waste your time, and I'd hate to do that." She murmured, pausing for a moment and then sucking her teeth and shaking her head. "As for how I got this way? Suppose I've been a LITTLE like this for a long time. Being in the Gotei certainly didn't probably do much to repress what I said. Not since I worked in Research and Development. Demon studies funnily enough. But uh..... when the wars happened, war does as it's liable to do."

She reached up, gesturing to the scar on her body, running down her face, and then trailing down into her cleavage and then over her heart. "Wasn't the normal kinda wound. Probably could have tried to just kill hi.... but I was not taking chances. Ya give up a few tings......chasin the light to try and keep from dippin into that cold dark forever..." Her eyes grew a bit ....distant. Remembering the very occasion. "Did this to myself, and killed him in the process. That kinda thing does stuff to ya." She gently turned her hand, a watch pocketwatch suddenly spilling from her hand, bouncing to a stop when she gripped it's chain, letting it spin wildly for a moment before she set it on the table.

She smirked a bit at the young man. "After that I decided to retire. Came down here and been living on earth ever since.And after a while that rubs off on you." she waved dismissively. Of course it perhaps sounded probably like a lot. But for Alastair's crowd? the spiritually aware? It was all too common with how the world wars had turned out. "Of course I learned a good number of tricks after the fact. So I suppose it had it's benefits." She grinned, idly spinning the pocketwatch before bouncing it up and catching it in her palm. 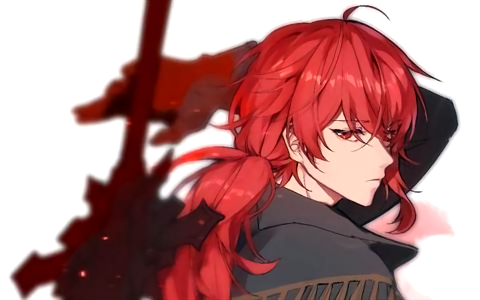 ALASTAIR EISFLUCH | Off Duty
Alastair's brow did furrow somewhat with a genuine look of concern as Kegare further explained her situation, his gaze following her hand as she gestured to the scar before cutting off as it moved away from her face and onto her chest. Parts of the story made sense and were perfectly understandable, but there were other elements that he did not quite comprehend. There was indeed something strange about her aura, that he could not quite put his finger on.

"War changes people, I can attest to that certainly. I lost some good friends fighting in America, but the worse losses were those where only part of them came back. It is a miserable thing, and yet it seems there is always a new battlefield these days."

Noticing now the pocket watch, he studied it absentmindedly as she juggled it in one hand and let those ill thoughts drift away. What did anyone have a need for such an archaic device in this day and age? We have computers and mobile phones, gadgets and technology far beyond this old analogue tool. No doubt there was more to it than met the eye, but he had no intention of forcing the her hand again.

"So you are a retired Shinigami then? I must admit, I did not expect that from your choice of career. There are few-to-none of your kind here in the City of Lights, I do not think the Vandenreich and Gotei have truly see eye-to-eye for a long while now - if ever."

She smirked softly, ahhhh so he was a veteran as well. Of sorts at least it seemed. She eyed him and that smile turned mirthful as she casually bounced the object in her hand. Little flicks, and shifts, dramatic turns of the hand, swiveling her wrist in circles and moves around that briefly eclipsed the object as it promptly seemed to shift from a pocketwatch to a little red ball, to a little gachapon container, and then back into a pocketwatch.

"Pain changes people. War just makes it more common. Though I do admit, you being a vet certainly explains that stiffness about you." She chuckled, and then paused.....thinking for a moment. The subject of the Gotei and the Vandenreich. "The groups certainly don't have a great history. But I admit I was never really interested in that sort of thing. But yea, Business brought me here, but the people seem charming enough."

ALASTAIR EISFLUCH | Off Duty
"I would rather think I have always been like this than admit that the war changed me so, but perhaps there is an ease to such a truth."

He continued to watch her pocket watch as it shifted forms in her hand, the sleight of hand gave him pause enough to wonder if it was genuine magic or simple dexterity. Either way, it hardly mattered in this day and age given that either was pretty common. Still, he sipped at his second drink with a marked caution compared to the first. There was no need to get too comfortable, even if she did seem rather harmless. He did not quite know what she was, but she had deftly evaded the question so now was not the time to force the issue. Everyone had their secrets here, some probably had more than others.

"Still, I am glad you find the people here charming enough for your business. The City of Lights is an upcoming metropolis, I can tell you that much, though I'm sure you would rather decide for yourself."

She couldn't help but smile just a little as she closed her hand, the object vanishing into her palm as she ......drummed her fingers. "Do you think there's shame in allowing war to change you?" She asked, sounding surprised and intrigued at Alastair's......aversion to attributing his growth to such things. Certainly it was an interesting subject at least to her. She considered his..... diplomatic nature and nodded slowly along.

The City of Lights being 'upcoming' seemed a little underestimating. So many other cities had simply been destroyed in years past, she was fairly sure it could be considered a straight up metropolis, after all there was so little competition. And she couldn't help but feel her curiosity getting the better of her. "It certainly is..... but I'm interested in perhaps..... a bit of a personal question, my dear host: If you would indulge me: What is it that you want out of life? You find yourself in these warm, brilliant walls. And yet, you don't quite strike me as someone who would lounge in splendor in contrast to the world around you. Just what is it you wish to accomplish? To attain? You asked me a question earlier which I avoided. But if you'd be so kind as to indulge me, I'd be happy to return the favor."

ALASTAIR EISFLUCH | Off Duty
"Rather that it would be easier to say that war changed me, when I have always been somewhat dry in disposition. There is no shame in it, though I do feel pity for some who now suffer."

He watched as the pocket watch disappeared into her hands once more, noting that it did not reappear, before turning his attention back to his drink momentarily. Swirling the liquid in contemplation as she posed him another question. It was an honest inquiry, at least, so he was not too troubled to find an answer. Nor did he feel particularly obligated to force her hand in turn, they were brief drinking partners for an evening, not close friends. If she thought him a fool then so bet it, if she agreed then maybe it was the first step towards something genuine.

"You are interested in my motivations? I cannot say many have asked about such a thing, though I do not mind answering." Knocking back some more of the liquor, he cast his gaze somewhat skyward. "I want to make the world a better place. For everyone. It is not a battle I can fight every day, hence I am here relaxing, but that is what I want to accomplish. There is enough suffering out there, a world that has never quite healed from the wounds it has suffered over the centuries, but with righteous intentions is the opportunity to cause some genuine change. That is why I am with the Vandenreich too because when I look at the Grandmaster I see the man closest to making those dreams a reality."