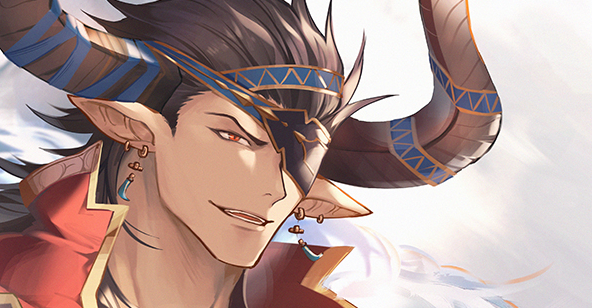 Psychological Analysis
A gentle giant, Kazuya dislikes violence. Despite his size and strength, he fervently believes that one’s hands should not be stained for foolish reasons. Though he may be pacifistic, Kazuya still understands the reasoning behind fighting. He would never undermine a person’s ideal and values, but he will always try for a peaceful resolution. The only thing that has ever stirred the bloodlust within him was the attempt on his sister’s life. It is why he smiles when sad and laughs when angry. Life, to him, is something to cherish, and he refuses to live a life of pain and suffering.

But, this is only a fragment of the man that is Kazuya. His peaceful nature does not get in the way of his work. Knowing that pacifism is a lifestyle foreign to many, his ability to create weapons has become a necessary evil in his life. Though he only forges tools for the purpose of protecting the innocents, the fact that people must resort to such measures wounds his heart. However, his work ethnic has no room for feelings, and when he is needed to create, he does so, making use of his boons to construct whatever is required.

This has led to Kazuya always wearing his emotions on his shoulder. It is easy to tell when he is bothered, even if he tries to hide it. The tones of his voice, the slight change in mannerisms, his body’s subtle movements: his big frame makes it near impossible to control his emotions perfectly.

BACKGROUND INFORMATION
Beyond the boundaries of the Rukongai exists lands untouched by civilization, a world unkempt and left to the devices of the creatures that lurked. This is where the strong survive. This is where the Kōga clan lies. It is not the only clan that exists far from Soul Society, but it is known as the most ruthless among its peers. The Kōga clan strove to be the strongest, making the lands around them their own. Located at the base of a dormant volcano, they used its heat as a source of energy, mastering and evolving around it. Their leader, an ancient Suika known as Heihachi, led with an immovable will.

It was tradition for Kōga men to bed many women, having many children. Through trial and error, Heihachi did just that, most of them dying due to the tough trials they were forced to endure at a young age. All but one remained at the end who survived his trials. That became Heihachi’s only child, a Suika who went by Ichinosuke. As the only son of the clan’s leader, he endured the worst of treatment, constantly fighting to secure his position as Heihachi’s son. He, much like his father, had many children, and as they proved strong, only one stood out.

Born into a clan of warriors, Kazuya was always the odd child. Strength and ability was always praised. Bloodthirst and war was always encouraged. However, Kazuya never showed signs of being capable of either. A pacifist, he was the child that always disappointed his father and clan. Despite his shortcomings, he proved incredibly bright however. As he grew, he proved capable of learning anything he put his mind to with ease, even being the youngest to learn his clan's heritage: The Inner Flame. Though, he did not apply it as those around him did, he showed the capability to manipulate it far greater than any other.

That proved his only contribution to his clan. He was pushed to the side and left to create weapons, whether he wanted to or not. He despised it, for he knew his clan used what he created for mindless violence. He always felt it would surely bring forth his family's destruction. He had hoped he was wrong, but he was not completely shocked when the day of retribution came. One day, he had a family, the next day, he didn't.

An assault from all fronts, the Kōga clan was attacked by all of the neighboring clans. Kazuya watched as his brothers and sisters were wiped out mercilessly. Him, proving one of the only ones that could not fight, hid, listening as everyone else died. He felt weak, a failure, yet, he survived. When he revealed himself, there was nothing left but an empty village. However, that is when he heard the sound of crying. Following the sound, he stumbled upon the wounded body of his father, an infant in his arms. Thinking his father dead, he approached, curiosity bringing him closer, and that is when he learned that his father still lived, and with his last remaining strength, protected the child.

She, much like him, proved the last of their kind, and Kazuya's father revealed to him a secret that Kazuya swore to never tell. And, with that, his father died right in front of him. Years past and Kazuya had taken the baby with him to The Rukongai to escape the cruelty of the wildlands. There, he made a living using the skills he utilized with his clan, creating tools and décor. He struck deals with the Gotei and the Rukongai Police, helping them with construction and creating anything they needed him to create. He just wants a life without war and bloodshed, but he knows such a thing is far off, and the little that he does only helps to keep the world around him from falling into mayhem, but even a giant like his can dream.

EQUIPMENT
None except his workshop and basic tools.

NATURAL GIFTS
A Giant’s Body: Being as big as him, it is only natural that Kazuya’s strength is higher than normal. Despite his peaceful life, one shouldn’t look at him as if he boasts no ability to defend himself or others. He easily dwarfs any normal person in physicality without even trying, but those who have lived their life growing their strength will find him a bit lackluster despite his looks.

A Genius: Kazuya was never a fighter. He was always a thinker. His mind is his greatest strength. He is able to look at anything, and in a short amount of time, understand its workings. He can look at the world and feel inspiration. Helping people with simple issues is childsplay for him. Problem Solving is but a hobby for him. Inventing is just how he lives his life. If not for his looks, he would probably be seen as an incredibly gifted individual, but he is obviously stereotyped against.

Savage: Hating fighting doesn’t mean he can’t. He still came from a clan of warriors and knows a thing or two about throwing and taking punches. Where he differs is his lack of style. He did not learn anything beyond the basics of combat, and his size and strength usually proves enough as a supplement to allow him to keep up with others. It definitely won’t help him against anyone who has trained their whole lives as a fighter, but he does not see himself needing to ever fight someone of that degree.

This is the ability to temper the world. It is a simple ability that allows Kazuya to manipulate the Reiryoku inside his body, transforming it into boiling hot energy. Basically molten lava, he allows this energy to exit out of his body, mostly from his hands, allowing him to raise the temperature of anything he touches at alarming rates. At high temperatures metal becomes easy to bend and mold. That is what he uses it for anyway, despite the other more lethal ways of using this ability.

Permissions in this forum:
You cannot reply to topics in this forum
Who is online?
In total there are 27 users online :: 3 Registered, 0 Hidden and 24 Guests