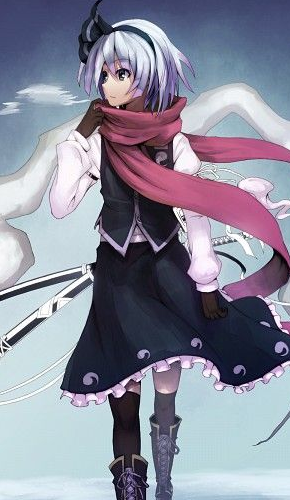 Psychological Analysis
Dancing between feigned elegance and energetic enthusiasm, Hiroe is a woman whose personality can often be described as multilayered, humorously unpredictable to the people who share her presence. The young Shinigami adores being at the center of attention, coveting the wandering eyes of handsome men who may glance in her direction or the jealous eyes of women she views as her competition.

There is never a dull moment when she is around precisely because she is never afraid to speak her mind. She is playfully flirtatious and will tease the female peers she views as friends about their love life, falling into the classic gossip girl archetype, especially if she senses chemistry between two people who she'd consider her friends. In her own words, variety is the spice of life, and experiencing every morsel life has to offer is well within her various set of principles and edicts that she lives by.

Although she is stubborn to a fault, Hiroe maintains a sense of humility, always reminding herself of why she chose to enter Shino Academy in the first place. Eccentric though she may be, Hiroe will always uphold a serious air about her whenever the situation demands it and when one can truly gaze upon the way she wields and dances with her blade on the battlefield, they will often find themselves stunned by the sudden shift in her personality,

Compelled by her indomitable will to reach for the stars and achieve her dreams, she rarely loses sight of what's important and reminds her peers of the glory they can reach together. To her, the dream of being a seated member, a vice-captain, or by some measure of skill and chance, reaching the illustrious position of captaincy in the Gotei - is nothing short of divine honor, an achievement she would take pride in until the end of her days.

Born within a peaceful district in the Rukongai, Hiroe's story seemed as if it would begin as a dull, listless tale. An uneventful life, if you will. Born to a family who owned a tailor shop and repaired the damaged clothing of soul reapers, HIroe experienced a relatively normal childhood. She was raised well, free to express herself in any way she desired.

Whereas other parents seemed to hold lofty aspirations and visions for their children, Hiroe's parents never placed any weight on Hiroe's shoulders outside of teaching her how to conduct herself and what it meant to be a well-meaning spirit to others. Blessed with an inheritance, Hiroe had no reason to yearn for anything beyond her station. She could grow to be a fine woman, marry a fine man, and run her family's business.

However, as Hiroe continued to grow, she began to develop a sense of "self." She would observe others, wandering around the districts whenever her parents slept. Ever curious to explore life, Hiroe would wander out farther than she was allowed which brought her to the more lawless district of the rukongai - Kushin. The moment she stepped in, she was met with a local group of bullies with ruthless intent in their eyes.

As a teenage woman who had barely experienced any form of training, Hiroe hardly possessed any means of protection. The group of men would approach her, with the leader of the pack pointing his sword toward her face. She closed her eyes, expecting a grim fate to befall her, only to hear a cacophony of chaos as the men were quickly subdued by a seated member of the Gotei who was surveying the district for any crime. Opening her eyes, she gazed at a smiling woman who approached her and ruffled her hair.


"You lost, kid? This district is no place to be wandering out at night. You could have died tonight."

Awed by the woman's appearance, Hiroe smiled and wrapped her arms around the woman's waist. Introducing herself as Saeko, the woman offered to let her sleep in her home tonight. By morning, she would take her home and go her separate way.

Of course, Hiroe, captivated by the woman's appearance and the blade she held at her side, mischievously pretended that she had no home and although Saeko would see through her ruse in the coming months, she welcomed her into her home. Hiroe was welcomed into a family of former and current members of the Gotei. Each of them treated her as if she were Saeko's sister and no one questioned the validity of Hiroe's claim of homelessness. Even if they did, they welcomed the bond the woman would share over the next few weeks. This would ultimately come to be the catalyst for Hiroe's dream - that is, to become a member of the Gotei United.

From battle strategy to swordsmanship, Hiroe studied and learned under Saeko. Her proficiency with a blade was poor at first but as time went on, she developed to a point where she exhibited enough potential with the blade that Saeko would put in a good word at Shino Academy.

Of course, the eventual revelation that Hiroe had parents who missed her dearly had upset the woman at first and Hiroe feared that she would take her home and never speak to her again.

Fortunately, at the behest of Saeko's family, Saeko would eventually forgive Hiroe, returning the woman to her true home. She reminded her that this was her true home and to deprive her parents of their precious child was far too cruel. Even so, Hiroe was free to visit her and her family as much as she liked. As a present to solidify their bond, Saeko presented Hiroe with an Asauchi as a gift. From thereon, Hiroe made up for lost time with her parents, growing into a commendable woman as she trained with her blade. After inheriting her family's shop, Hiroe decided to finally set her sights on her dream - to join the Gotei United.

But first... she would need to go through the academy.

Mystical Tailor: Living under the roof of a pair of tailors, Hiroe has cultivated and mastered the fine art of sewing and weaving together outfits to a point where the mere act of creating cloth is as natural as breathing to her. Even though it is hardly a useful skill on the battlefield - for now - HIroe can sew a series of clothes that allows her to hide from the eyes of her opponent or trap them if the cloth is strong enough to keep them down. Naturally, Hiroe uses her skill as a tailor to make neat creations of clothing for her and her peers. One must always be as fashionable as they are skilled, after all.

Swordsmanship Proficiency: Though far from the level she desires to reach, Hiroe is a skilled swordsman who clearly shows an affinity and grace for the blade. Her coordination - especially for her young age - speaks to her potential to achieve great feats in the realm of Zanjutsu. She never seeks to rush and strike at her enemies without forethought. She will read and discern the enemy's movements and strategy, choosing the opportunistic moment wherein she perceives a flaw in their technique, seizing the opportunity without hesitation. She is naturally skilled in Kenjutsu and has even studied Iaido to continuously cultivate her sword techniques.

Asauchi: Even though she has yet to pour her spirit and will onto the blade, Hiroe shares an intimate bond with her Asauchi. It was given to her as a present and proof that she has the potential to achieve great things within the Soul Society. As such, she takes immensely good care of her weapon and never lets the blade out of her sight. Eating with it, studying with it, or even taking a bath with it - is but a shortlist of the common and quirky moments she shares with her sword.

THROUGH THE POWER INVESTED IN ME...
« Application Checklist »