Turned Around in the Wrong Neighborhood [Lerna/Meninas]

Lerna.....wasn't quite sure how to feel about that response. On one hand, at least the girl wasn't just....still confused about it. On the other hand, it was still a little depressing that it was possibly more to the fact that the girl just couldn't, or didn't want to, think about such a concept? Actually she didn't even know about that, and she found herself briefly lost for words as she attempted to parse that response. At the very least, it seemed the girl was decisive. Glancing at the confection being pointed at and promptly paying the vendor for it, truth be told...Lerna kinda expected her to not have any money on her, given how their interaction had been so far.

Noticing that the shopkeep was a little weirded out, she offered a smile and a sheepish apology before she promptly led Meninas off to the side to a spot for them to sit while Meni enjoyed her dessert. Lerna sitting there.....staring off into space as she wondered what she was even trying to accomplish. Was she just .....trying to protect this woman for really no good reason, or even knowledge of IF she needed to be protected? Was she trying to ....fandangle some sort of glean as to wether this girl, for some bizarre cosmic reason would just HAPPEN to be a mod soul? Which, frankly felt stupid unlikely. And yet, she couldn't shake the feeling....that it was just going to bother her....for ever.

She could already feel the question festering in her head, and she looked at Meninas, presumably when the woman was in the midst of eating her treat. No, this definitely wasn't something she could let go on, especially if other members of the squad noticed her hanging around their barracks so often. And well.......the girl did seem honest.

"Are you a Mod Soul?" She blurted out. 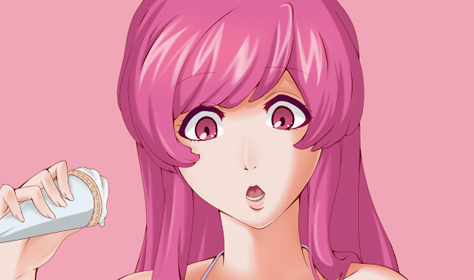 Meni asked while snacking on her delicious maccaron. She was honestly a little put off by Lerna's weird behaviour, it's like she was so nervous but Meni couldn't say that she wasn't used to observing people's peculiar behaviours. It had become normal for her to witness some level of discomfort from people when it came to her.

The treat did not take long to go down but she was satisfied with it. Meni didn't eat much.

Lerna's eyes widened ever so slightly as the woman responded to her question. The mention of the woman having been a human woman at some point, and of course....that she was a Mod Soul Now. Gamu's mod soul. She'd been MADE this way. She was familiar with the process, having seen somany others made, her own exploration of her own capabilities. And it occurred to her that Meninas had been programmed to be like this. Simple. Obedient. And a sheer, bubbling hatred and anger coursed up through her body as she thought about all of those who had used this woman because of the state she was in. She was....of course aware that she was jumping to conclusions. A ....VERY likely conclusion.

And.......what? What exactly was SHE going to do about this? What was she going to do WITH this knowledge? But more importantly: why did she care? Conflict wrote itself across Lerna's face as she ......felt incredible uncertainty. What did she fucking care if these things the shinigami did just piled up? What did one more sin on them matter? Who was LERNA even to judge such things? A monster that had slaughtered and devoured so many. But this felt different. Death was one thing, but to reduce a creature to this state. It reminded her of what had been done to HER.

She wanted to meet this Gamu woman. And do what? Confront her? That sure sounded like a fast way to get 'reposessed' as research materials. Surely....WHAT? And then she looked up at Meninas, seeing that calm, vacant look that was being given to her by the woman, and her chest ached, all the way down to her pill. And for a moment......she wanted to tell her that she was a mod soul too. But she was afraid. Cowardice burned it's way far deeper into her heart. What if Gamu found out? What if everyone found out? She had to talk to Murasaki..... maybe even Magnolia? SHOULD she? Would they believe her? She wasn't sure..... But . She didn't know if she could ignore this. But....she had to focus right now.

"Is that right? Man, that's kinda impressive. I can't imagine that was easy. What was it like? You know......being...mod soulified?" She asked with a tilt of her head, as if she wasn't abundantly aware of not just the modern process, but the excruciating predecessors that had come before it.

She explained while looking around, it was for the best that the whole thing wasn't strong in her mind. Trauma was amazing when it was tucked away at the back of the mind, supressed and ignored. Left to be smothered by coping mechanisms until they had some semblence of functionality.

More specifically her mod soul nature, Lerna seemed to be prod so intensely about the details about her and Meni barely knew what was going on behind this other woman. Oh well, it probably wasn't that important.

Lerna nodded a long slighty. That tracked well enough, keeping those memories certainly wouldn't have helped much for the process. Though she WAS curious how the girl even remembered she was a human. Or had that simply been programmed into her? She wasn't sure, but it only made her angry to think about it, and she needed to keep her cool around this woman.

"Hm, I suppose that's fair. A lot of shinigami forget their lives as humans. Souls in general in fact." She noted, closing her eyes as she tried to center herself. Although....the woman's comment made her pause. Talk about an understatement.... she knew she was overfixating.... and it was very possible that Gamu would find out about that. A tingle of fear coursed up her spine. She despised her own cowardice....
"Hmmm, maybe I am. Guess I just enjoy your company." She noted with a fond glance in the woman's direction, not even sure what she should be doing. Would the woman even respond to comfort? Did she know comfort anymore? Was she capable of that sensation? She enjoyed food after all. She didn't know, just.....too many questions. And she had to keep from being too weird. For now.

"Ya know. If it's uncomfortable you can always tell me to buz off. You don't have to be near anyone you don't want to."

MENINAS | TOUGH GIRL
"I didn't say uncomfortable. You are confusing."

Meni stared at her for a while, wondering about what to do while she sat here. She didn't really have a lot of initiative, and to imagine what she was trying to get at did not compute to her. What was the end-goal of Lerna or her desired outcome? Oh how confusing it was to her.

Lerna chuckled lightly at that and nodded, watching the woman as she seemed to struggle with these things. "Hm, is that right? I suppose I'm sorry I'm so confusing. What about me confuses you? If you don't mind me asking." She decided to try and pry. Not at the ....probably more dangerous details. But just at ....what was going on in her head. Some small part of her hoping that there was at least SOME level of process on an emotional level. Mod soul were entirely capable of growing outside of their programming, and she ....sure did hope...that this girl was capable of that. More than knowing more about what she was....why she wasmade, and the sort of things Gamu had her do. She just wanted to have something. Something to hold onto...that even if something WAS done about the situation, that she could....be salvaged.

And the fact of the matter was: She didn't know if she wanted there to be anything. What was better? A woman with no hope of being saved? A woman who could still be saved, but wasn't going to be because ....it just wasn't in the cards? She was too ....weak... And even if she wasn't, would she be able to just.....take the woman away from here and then beat anyone who got in her way? That just wasn't how it worked. And the notion of somehow just....fiuxing her on the downlow. What would happen if Meninas ...FORMED a will, and then started asserting it around Gamu? There were a lot of answers, and none of them were good.