Inanna Kishar | TWINKLE VANILLA?
It was a fun time but Nanna couldn't say that it made her feel any closer to the answers for her questions about how she should feel with so much new information about her mother which she just did not know until now. So many different things about the woman which she would not have assumed to be the case, was she just immature despite the fact she insisted that she was a definitely grown-up and could handle herself.

She thought to ask Vegas about it, she was like her bff after all but Nanna sure did realise the moment that she asked Alex if she had a moment that this was felt like something that needed a more insightful person. Vegas' Mum came to mind but she was also pretty old wasn't she? Nanna wanted the perspective of someone who might empathise with her more. A person that was travelled but not so old that she might as well have just asked her mum when she had the chance.

Crawling out of her bed and leaving the bedroom that she shared with her bff and partner in vigilante magical schenanigans Nanna walked towards the lounge. Not even in the mood to try and sneak on whatever game that Nelliel might be playing until she found another one she liked though she seemed to be reading more again.

Instead she just flopped onto the couch and turned her head from the cushions to look at the TV which wasn't even on. Too much to try and think about to care about whatever could be on the TV at the moment. A peculiar sight for her. 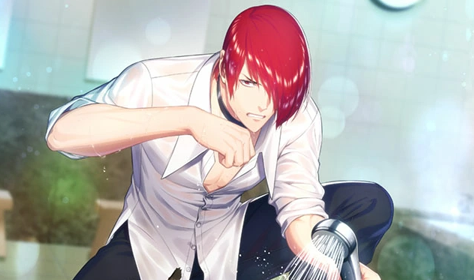 ALEX
"You're up a little late, eh kiddo?"

It didn't actually surprise Alex to see Inanna up this late. Her mom had left town again, and it didn't take too much of a genius to know that a kid would probably miss their mother after she was gone, and from how much they'd spent time together, he figured they were probably close. Flipping the channel to something at least slightly more appropriate for a child, he took a seat on the couch and held out the bag of chips he'd grabbed from the kitchen.

"I'd tell you to go to bed, but that's not exactly my style. What's gotcha up?"

He knew, of course, but it was better to ask.

Inanna Kishar | TWINKLE VANILLA?
She didn't immediately register that Alex came in until she heard him getting about and plopped down next to her with chips. If she wasn't so distracted by her troubles then she might've tried to grab a handful from him without bothering to ask. Nanna just let out a whining sound to his question. Maybe he was the best person to ask, she didn't immediately think of him but it did seem like he fit the bill. The best suited in this house anyways.

Inanna asked. She ought to check with him and make sure that he wasn't a couple thousand or so years old first. Just to be sure.

It was enough of an odd question that Alex suspected there would be some sort of followup to it, so he turned the TV down a bit and held out the bag of chips as a gesture of good faith. Not that he exactly thought they were on bad terms or anything. If anything, she was almost like a second daughter to him just from how long she'd been part of the family.

Now how exactly did she poise this question to him? Inanna found it a really hard thing to try and convey it in a way that she was happy with. While she thought she got up from laying on the couch and crawled over to grab some of the chips from him and put them in her mouth.

She bit her lip, that wasn't it at all. He probably knew that she long-lived when he got with her. This was a lot different.

Nanna felt awkward to spill her guts like this too him but the amount of thought she had put into it was evident since it was lacking her normal immature behaviour. Her two weeks of Ninsianna's attention were the most fun she's had in a while with her mum but it didn't answer any of the questions raised.

ALEX
"It's a little jarring, but I don't mind."

Alex listened to what Inanna said carefully, and rubbed his chin idly in thought. Hm... Well, in a lot of ways, he didn't know too much about dealing with parents. After all, it wasn't like he'd dealt with his much, and he ran away when they got to be too much of a problem. Then again, that was mostly Lydia, not him.

"I guess that's part of being a parent. I'm not your mom, so I can't say for sure, but that happens sometimes with me and Nel. There's a lot about her I don't know, and I'd be lying if I said I didn't want to know more about her and her life. But at the same time, I think there's a lot of it she doesn't want to talk about. Might be that way with your mom, too."

Of course, he wasn't sure about that, and he reached over to give Inanna a reassuring pat on the head.

"You're not wrong to want to know those things, though. I think it's totally fair to feel that way, like you want to know more. Just try and remember that she might have a reason of her own to not want to talk about it. Just from talking to her, I can tell she cares a lot about you, so I don't think she'd hide things from you for no reason."

Inanna Kishar | TWINKLE VANILLA?
"Well, I suppose so but if she doesn't tell me then how can I help her if she needs it? It's not good to keep things bottled too. She already spends all her time working, it's not fair if she's carrying around all that weight on top of it."

That kind of responsibility sounded hard to carry and Nanna hated burdens and responsibilities, it sure was no small amount of a selfish desire to know as well. The same way that she took more satisfaction than she made no effort to pretend that the hand on her head didn't feel nice. She liked when people played with her ears and hair, it was comforting, but she also didn't want admit to anyone that she got something else that the other candidates who did the action could not replicate. That confident, reassuring and mature masculine attitude which she didn't get any of in her youth.

"Do you think she doesn't trust me to know or is she afraid that I might not like her if she did?"

Nanna asked, understanding that she was asking him difficult questions that he didn't know the answer to but it felt better to just feel like he was listening and understanding.

ALEX
"Well, that's true, but honestly we parents don't really like to put that sort of responsibility on our kids. We feel like it's our responsibility to keep it all inside and be a nice, stable rock. Know what I mean?"

Ruffling her hair a little bit more, Alex then leaned back to think about the question that had been posed to him. Hm, that was a tough one. Well, was it? Nah, not really. It was just kinda hard to answer.

"I don't think it's either one, honestly. I've got no doubt she trusts you, and I don't think she's worried about you not liking her. I could be wrong, maybe, but if you want my honest guess, it might just be that talking about that stuff would upset her, and she doesn't want you to see her like that."

Inanna Kishar | TWINKLE VANILLA?
"I guess but it's still frustrating. I want to know her but how am I meant to get to know her if she doesn't let me know, and I want to know things. I'm so young but she's so old and she waited until now to have me, is that weird? She never told me she's been engaged until now to someone that's not even my dad and I don't know, it's just hard."

She shyly adjusted her position to rest her head on his lap, looking at the TV with no intention to dedicate any attention to watching it. He was nice and warm, he smelled different too compared to what she was accustomed to. While she did hope it would encourage him to keep up his work, she was too embarrassed to ask him to continue if he stopped.

"Am I bad for wanting to see her like that if that's what it is? Even when I feel bad I always say things that upset me, it makes me feel better like when I went to Mum this time. I just had a nightmare that she died and I was really sad so I wanted to tell her I was sorry but now if she died I feel like I might not even know the person she was."

Her head turned to hide her face since the very thought of that possibility made her eyes start to water up. It was embarrassing to cry so easily over it, grown-ups didn't cry!

ALEX
The way Inanna said all that, and the way she rested on his lap, only further made the paternal nature Alex had simply become all the more enflamed. If anything, he was a little bit mad now. Not at Inanna, of course, but at her mother.

"That does sound hard. If you ask me, you're not bad at all for wanting that. That's what any relationship is built on. Not just romantic ones, but family and friends, too. You know them, you trust in them, you share things. I don't know your mom well enough to ask, but my advice is to tell her that the next time you see her. Just be honest, and tell her you want her to be honest, too."

Alex made sure, through all of that, to continue gently playing with Inanna's hair, the sort of fatherly attention that he gave to Vegas as well. Honestly, this all just reminded him how much this kid meant to him.

"Just remember she loves you, yeah? I'm sure she's not trying to hurt you."