NINSIANNA KISHAR
"That is a quite impressive connection to have, certainly. You mentioned your ancestors previously, and so I take it that you speak with your people regularly. Is your attachment only to your tribe, or to these lands?"

It would be a lie to say Ninsianna was not asking that particular question for selfish reasons, but it was still something to be noted for her record. After all, whether or not she could see her goddess through this was irrelevant. She knew that this recent preoccupation with the past was not healthy, not in line with the very promise she had made. She did her best to return her focus to the immediate matter at hand, to cast her own wishes to the side for now.

"Such a ritual does sound affirming for those you assist. Closure is something that good people are often denied." 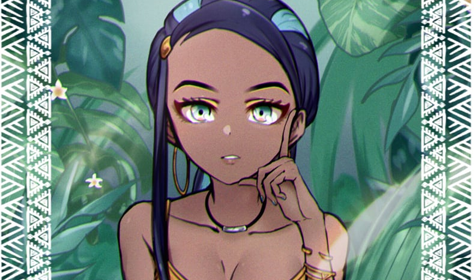 Arjana | Death Goddess Avatar
"These lands. In foreign lands I feel only lost, I would not hope to brag but I possess a lot of... power so to speak in this land from our connection. I do not pretend that there may be individuals like me, in different places and times that had the same capacity as I do however. I see my ancestors, others and more recently even people that have made their homes in this land and formed a bond with it."

She did not bring up the fact that she had yet to meet the recently deceased King of Vastime in her dreams which confused her, she would imagine someone as dedicated to this place as he was would be someone she had stumbled upon.

"It is. I must admit though it can be difficult, some people struggle with the differences there. It reflects this plane but is quite strange to the living. I suppose in a way it would compare to the underworld of your own faith, no?"

NINSIANNA KISHAR
"I had assumed as much, but of course I do not want any record of this tainted by my own assumptions. That does certainly sound like the underworld that I have always known, yes."

At least, in the broadest strokes, but Ninsianna was not here to proselytize. She had not done so in a long while now, and she would not do so again until she departed this Earth. For now, she was content to simply be a professional in whatever work she accepted.

"Forgive my assorted questioning. I am here to record your faith in as much entirety as I am able, so I do not mean to distract you with small talk."

The thought that this woman could not have reunited her with her goddess, even if she so wished it, was both relieving and faintly painful for Ninsianna. She would call it a blessing, at least, that she was not tempted by such a thought any longer.

She began to recite at length, answering any questions that Ninsianna had or any clarity that she required. Showing off certain tools, materials and symbols and what they meant or uses. She tried her best to describe the peculiar laws that her 'underworld' worked by and all the more. Up until she was halfway through talking about the ritual process she had done to restore Atlas' arm when Inanna burst in with a couple of children.

Now dressed in the more traditional outfit of the villagers with a plain brown dress on and took over the scene by reciting her own tales of the day, how she was allowed to play games with them - they even let her be the 'queen' whatever that meant to Ninsianna, they got her these cool new clothes and how much fun she had while insisting that Ninsianna also get some clothes before they went.

Arjana just sat back while letting their time together come to its natural conclusion, she had taken quite a bit of this woman's vacation from her, no? She tried to think of something witty to say but settled on saying something that Ninsianna had left her thinking out when she mentioned a metaphor for human life.

"Ninsianna, know that the stars of the Earth still shine in death. I hope you leave life as gracefully as you lead it, and your daughter leads one just as well."

It was a strange way to say goodbye but by this point she should understand Arjana's views on death.