Hana had smiled and nodded when Amon expressed his wishes to reach Arkin's power level. Her smile wasn't meant to ridicule that, quite the opposite actually. In fact she saw and recognised the fire that was in his gaze. It was the same she felt. One could say that there were some parallels between this bout and Elyss' visit a while ago. But even though Arkin could have turned the whole fourth division into dust, Hanako couldn't sense any ill intent. It was like back when Magnolia helped her achieve Shikai. It was overwhelming, but it only served to strengthen resolve.

"You and me both." She just said before she left Amon, knowing he would be fine.

A few moments later she stood next to Tento, equally relieved that her friend was mostly fine.

"I'm bleeding?" She asked, genuinely surprised. Only then Hana realised that the back of her black shihakusho was wet and stuck to her skin. She touched it and it was warm. She looked at her hand: it was red.
"I'm bleeding."

She felt the pain, a burning sensation, and had initially attributed it to her impact into the wall.

"Must be my wound from Elyss. I guess it opened again. Thank you." She added in a low voice, so only Tento would hear. She felt quite fine, so she guessed the blood loss wasn't too bad. Still…she was thankful that Tento was right there.

"I guess we have our work cut out for us." She said, more to herself than to anyone else.

The bodies of the 4th division hustled and bustled in the urgent care. Moving like an well oiled machine. As Hanako and Amon had talked expressing their wish to grow to a higher level of power as well as skill. A fact that every member of the combat division felt in every inch of their bones. The spectacle of the power of their Captain and Vice Captain; and even more so. The tenacity, will power, and grit of their fellow unseated comrade in that type of battle. It showed the will to fight against any opposing force that made the combat division who they were. They were warriors and so much warrior, but that fierce spirit was inside of them. And only got stoked by Amon's actions!

They weren't able to fight alongside them in this spar against their new captain. But they had did their part, staying to the sidelines watching, putting the barrier out to control the flow of energy (a little) and keep the damage from expanding to the external areas. And now, it was up to them to lend aid in the healing process. Bandages were gathered, ointment readied, and energy glowing in hands for the ones that knew of healing kido. A tag team effort was done to heal Captain Arkin, and Amon; care to make sure movements didn't further their injures or cause pain.

"Yea you are", Tento said with a sheepish smirk and soft exasperation. It was so like her to not realize that she was. Oh she really needed to be more careful about that kind of stuff. Blood loss could become a big issue if she did not notice. At least right now, she looked fine. Well....mostly, a little. He slowly walked, moving to her back and gently placed his hands onto her back. The coated color of her blacked shihakusho coloring his brown hands and getting a little bit in his finger nails. It was warm, fresh. And he wanted to get rid of it as soon as possible.

"Elyss? Who is that?", he asked not yet up to date with the full details of what happened in the division before his arrival. Perhaps she could tell him more while he treated her wounds and healed her. But then again, that was something out of his focus and would more for Hanako to focus on to distract about the pain in her body. "You're welcome", he said back in a low tone and a nod of his head. His hands grew brighter with a glow of his spiritual energy as he began to seep the power into Hanako's body. It would take some time likely, but he would try his best to heal her and anyone else that was injured. 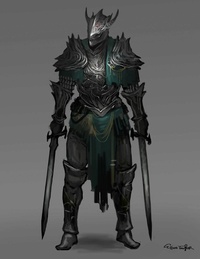 With what being healed, the concussion and pain from his injuries waved off fairly quickly, Amon stood up fully and pop his shoulder which was repaired now starting to look around. Arkin left, Hanako and Tento too, everyone who hadn't been healed were starting to leave all except for Amon. He gazed around the now ruined training stadium with his thoughts from bystanders to the destruction before him. Amazement was one word to help describe what he had experienced, though painful, it gave him a mental door that's now opened to him. It gave Amon that view of what real strength looked like and he was more than eager to reach that level of power. But that would take a long, long time to do, so for now he would use need to practice more.

When everyone cleared out Amon waited until then to start assessing the damage, how much budget it would take to repair, and so forth. But his concern now was making the arena bigger, there was plenty of space that could need claiming and it would allow others to have more room to fight in. That being said he needed to start with planning. After all, if they had another scuffle with someone like Arkin then it was required to help compensate for the future events. Back and forth his mind lingered on the fight that just took place, and while Arkin commended him for the show he couldn't help but feel ashamed. Several months out of Soul Academy and he's felt as useless as a small handkerchief trying to wide up a gallon of paint. And thus his drive to grow stronger only grew even more.

There would be a time and place for that. Amon sighs taking everything in from the blood to the cracks of the ground, he picked up his Asauchi that he dropped when he fell victim to Arkins spiritual pressure. He looked it over, trying to decide on whether he really wanted to be a Shinigami, a thought that's crossed his mind plenty of times. He wasn't afraid if death, he wasn't fearful of the enemy and trials ahead but instead he was afraid if not catching up to his colleagues. Already much of his fellow students in Soul Academy were decently strong, maybe not like Hanako, but they could easily hand Amon his own ass. Frustration starts to build and he slid his blade back into his sheath, again looking everything around.

"You'll get there, amigo," The voice in his head said, almost as if it knew his concerns, "Not everyone is equal, tomará algún tiempo, save your feelings for the next time."

"Sure as hell doesn't feel like it..." Amon replies more to.himself than the voice, he went over to the stone bench he set the papers down only to find them completely tore to shreds. Sighing once again, he didn't even bother picking then up, instead turned to head back to his office fir a much needed shower, lunch, and redo of the weekly reports. It was going to be a long day.