» Why: Benishidare was a bit of a meme initially by using a filler anime one and building off it but you know, me being the zanpakuto boy and all I wanted to give her something unique. Imma be real, I wasn't actually expecting Makoto to ever take off as one of my more leading characters when I made her but here we are and I figure she deserves the good treatment.

Also, her current shikai or zanpakuto has never appeared in any threads so it's a pretty negligible retcon.

» Zanpakutô Spirit Summary: Shimensoka appears as a woman who resembles Makoto's deceased mother - only appearing as a intangible looking ghost most of the time, though she does demonstrate the ability to take a more fleshed out form. She is serene and rarely talks, often being difficult to converse with due to her preference for solitude and condemning towards her master who persists to engage with her despite having the same inclination at heart to want to be alone.

While she is not helpful, Shimensoka is prone to revealing details without meaning to such as hinting to Makoto that Shimensoka North and South are not made for offensive applications by admonishing her master for her violent demeanour and interest in only the offensive aspects of her power. At the same time there is a mutual understanding although Shimensoka does not give ground and by proxy cannot be said to respect her master or feel that she is deserving of the full power which only adds to her tempermental nature. 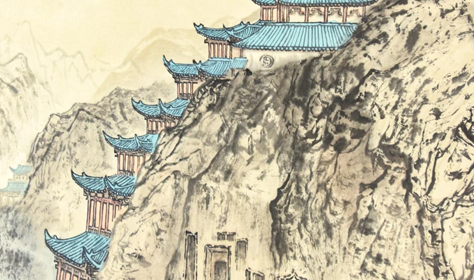 » Zanpakutô Appearance: The sealed form of Makoto's zanpakuto takes the appearance of a wakizashi which she keeps sheathed behind her to be able to be drawn horizontally. It is adorned in a white sheathe with white cloth for its handle. Its tsuba is gold and a red rope tassel hangs from the end of the handle.

» Sealed Zanpakutô Power: Makoto is able to pull on some of Shimensoka's ability to draw in ambiet reishi and extends the length of her blade to that of a katana. It has the same downsides as the shikai though.

» Shikai Release Phrase: Scatter across the four winds and rejoin to reveal all of creation.

» Shikai Release Action: Her sword must be sheathed to activate shikai.

» Shikai Appearance: Upon activation of her shikai, the sheathed sword extends and becomes a spear which is blue and white. The spear looks like it was made for stabbing rather than sweeping motions due to the pointed blade with four prongs coming off it.

» Shikai Ability: Shimensoka's power is the power to manifest something four-fold. In quantity, not quality. Makoto could not use Shimensoka to amplify an attack by four-times its potency but it is feasible that her shikai could create up to four additional applications of the same attack, in addition when she manifests anything it is absolute that all projections will be exactly the same. She could not create two hands and two eyes for example, it would be up to four of either.

As another restriction, while she can create up to four (and doesn't need to have all four out at the same time) if there is something present which is generated by Shimensoka then it would need to be cast away before she can create anything new.

Notes
Any body part created is emulating her own, using her General skills.
Sensory organs can share information with Makoto as though they are additional sensory inputs, in the case of specifically sensitive body parts being manifested and damaged could be quite painful.
She cannot use Shimensoka East to create entire copies of her body, and the parts created are typically small. Hands rather than arms, mouths or eyes over an entire head.

She can only use one of Shimensoka's cardinal at a time.

Shimensoka East: Shide [四手, Four Hands]: Makoto is able to manifest four hands that float behind her and can utilise them at will in a number of ways as long as she is wielding her zanpakuto. For example she can utilise them as additional limbs to benefit augment her hakuda, manifest them to try and catch or block an incoming attack, grab a target.

Shimensoka East: Shide [死手, Death Hands]: Using the ability which is a homophone of the previous one, she is able to detonate the hands when she no longer requires them with the power equvalent to that of a shakkaho. While it is specifically in regards to the hands which she prefers to utilise - this ability covers detonating any and all constructs that she might desire to make.

Shimensoka East: Shime [四目, Four Eyes]: The ability to conjure four eyes instead of four hands which allows for her to utilise them as additional view points. Makoto can have any of these four eyes manifested though they remain the size of a normal-sized eye, they gain no special advantages such as seeing invisible targets, heat signatures or anything fancy. They are perfect copies of her eyes, and will see what she is capable of seeing.

Shimensoka East: Shikuchi [四口, Four Mouths]: Manifesting four mouths allows for Makoto some freedom, for example she can utilise it to pass on a message from afar. Its primary usage is to allow for her to utter up to four kido incantations simultaneously. Similar to Shimsensoka West: Shijo Ichijin however, Shikuchi allows for four different kido to be cast rather than utilising the same one four times instantly - depending on her choice of kido spells and the incantation lengths it can make them have delays between being cast all at once.

Shimensoka West: Shijō Ichijin [四重一陣, Fourfold Spearhead] Using Shimensoka, Makoto is able to replicate an action by four-fold as long as the means are available without any requirement to reinitiate. Primarily used for kido however hypothetically, it can be applied to Hakuda due to being able to manifest additional limbs. By casting a kido and activating Shimemsoka's ability she can instantly cast three more which makes it a potent technique to overwhelm an opponent albeit draining on her reserves as all spells will be replicated with the same amount of spiritual energy that she used in the first one.

Shikai Weaknesses:
Release Nullification: She can't use shikai unless the sword is sheathed.
Shimensoka East: Due to creating reishi constructs, the constructions are able to be torn apart by a Quincy who has Reishi Absorption that is higher than her Zanjutsu which renders Shimensoka East as useless.
Ineffecient: Designed to overwhelm, Makoto's stamina is prone to being depleted by the intense drain that this shikai can have on her reiryoku reserves and physical body. It is not useful for long battles or where she needs to repeatedly use its abilities.