Exhaling deeply, Kenichi lifted his head to evaluate his body's current state, his surroundings, and whether or not Vanyel had been swept away within that torrent of atmospheric force. There, a few meters away, the rising dragon recognized the dragon of kyushu standing in the arena - standing with unbowed determination. Grinning from ear to ear, he charged forward, shifting his body to avoid Vanyel sweeping at his legs with a low strike in his aim to disrupt his balance.

One of his arms was clearly out of commission, but that mattered little in the grand scheme of this battle. The pure adrenaline of the duel had seemingly erased the pain in his wrist. At this moment, he was lost within a wave of pure elation, savoring this state of absolute bliss. Nirvana at it's finest. Shifting forward, Kenichi raised his arms to deflect Vanyel's next strike, pressing forward as he aimed at his midsection with his workable fist.

He paused in the middle of his assault, analyzing the man with absolute focus. He was suggesting that they call it... a draw!? If this had been a spar, perhaps Kenichi would've conceded. He understood wholeheartedly that there were limits the body could be pushed to and he was definitely nearing that precipice as they spoke. Exhaustion was building up, he had snapped the bones in his wrist, and his midsection collected a few bruises from impact of Vanyel's strikes.

Observing him with curiosity, Kenichi ascertained that he, too, seemed to be at his limit. Pulling backwards, the young male let out a sigh of frustration as he fought between the decisions in his mind. As much as he desired to be wise, to learn from advice passed down to him from those he admired, the thought of cheating this crowd out of a finale simply did not sit right with him. There was little else to it than that. Grabbing onto his wrist, Kenichi would grit his teeth as he snapped the bones in his wrist back into place. The sharp sensation of pain only seemed to excite him. Focusing his gaze towards Vanyel, Kenichi would shake his head adamantly, pointing towards the crowd in competitive frustration.

"Listen to the crowds roaring our names in unison. Do you think THEY desire for us to call it a draw? My body is fine, as you can see. I snapped my wrist back." Kenichi would swing his fist forward, gritting his teeth a little as he did so. It was a bit of an act of bravado, to be certain. His wrist was okay... to an extent, but far from good condition.

"I want to keep going. Let it be known that I have nothing but respect for your ability to show restraint. It is an admirable trait for a warrior to possess. Under any other circumstance, say, a spar or training match? I would accept your terms without question. However, here? Where the fans demand a victory, to see their champion emerge victorious---I cannot accept that. I won't. Right now, I'm not someone for you to care about, I'm someone for you to defeat. I'm sure you didn't rise all the way to the top to cheat yourself with a mere draw. Come on! Claim your victory, Vanyel! Because I sure as hell won't stop aiming for mine!"

Drawing his fists back, as he did so moments ago, his mind had been made up. Generating that atmospheric force, torrents of air dancing around his hands, Kenichi peered into Vanyel's eyes with a fierce gaze. His body was at its limit. To use Dragon Strikes At The Apex in consecutive rounds would likely do a number on his body. Yet Kenichi cared little about that. As he said, his sole desire at this moment was to claim victory. Charging forward, the Rising dragon soared towards the Dragon of Kyushu, to meet his fellow brother amidst the heavens. 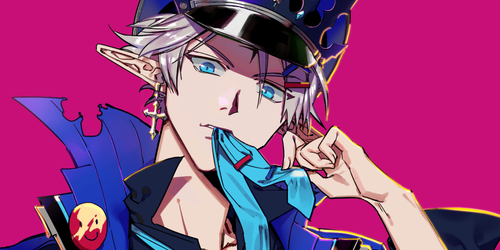 Even with a broken wrist, he had to commend Kenichi's sheer determination. Getting himself upright as soon as he was able, following Kenichi's avoidance to his trip, Vanyel went back into his stance, keeping himself ready to move at a moment's notice as he watched the other man seem to wrestle with the decision, before, Vanyel watched him do something that could only be described as completely stupid.

Kenichi grabbed his wrist and forced it back into position, or, at least as much as he could. Vanyel winced at the sight, knowing that even if he did try and force it back into a normal position, it wouldn't fix it outright. His breathing became more obviously labored as he tried to take deep breaths, to level himself out. His eyes turned to the crowd, hearing them call both of their names. He chuckled softly, shaking his head.

He wasn't a showman. He wasn't all that flashy compared to most other people. If anything, he would only really consider himself to be brutally efficient, and yet, here he was. At first, he considered throwing the match in some way that wouldn't bring suspicion onto him. But, there was something about the competitive desire to fight, to finish this in some climactic showdown from the Rising Dragon that was utterly infectious.

Vanyel grinned, lifting his right foot to push down and stand on his toes, ready to push himself forward as he put his arms up in the same stance he had taken before.

"Let's do this your way. There's only room for one dragon on this mountaintop, and I'm takin' that spot."

Without a moment's hesitation, he pushed off his foot, taking off in a sprint toward Kenichi. His fingers were spread wide like claws, ready to thrust out and strike, to drag him from the peak so that a new Dragon would take the throne. The fledgling devil had nothing but a wide grin and a wild look in his eyes, as if he had gone back to younger days in the yakuza, butting heads with his sworn brother, a friend that was always on his mind.

Now, after so many years, that nostalgic flame burned bright in his heart as the men charged forward with every intent to claw victory from their opponent.