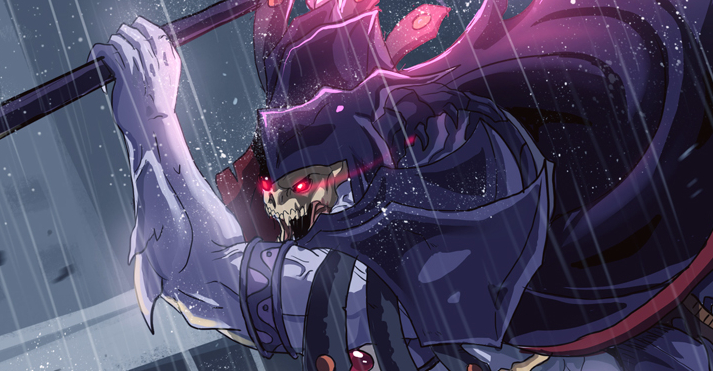 Psychological Analysis
He’s fuckin’ pissed. Not just pissed, but really pissed. Like, on a scale of 1-10? It’s squarely a 15. You can’t even begin to understand just how pissed this guy is. I’m talking hella pissed off, will just beat children for no reason pissed. Know why? Because nobody respects the dead anymore, and that’s fucked up. They need to fucking learn.

Anyway, he’s a pretty cool guy on the off chance you can catch him when he isn’t pissed. Like honestly, probably one of the coolest guys you’d ever meet. He likes video games, can you believe that? But he’d never play too many, he’s too busy being mad fucking upset.

Chill guy though. If you’re on his good side, he’ll help you out no problem, and if anything, he’ll usually let you off pretty easy if you’re nice about it. Bonus points if you’re dead.

RELATIONSHIPS
None. Wants one though.

BACKGROUND INFORMATION
At the age of 555, Langellan is a man that has seen a great deal of conflict and strife. He was, at one time, a pleasant man, with a kind heart and a generally good demeanor, who wished only to see the best for mankind and their skeletons. However, the Third World War changed everything in his mind. There was such disrespect, for both the living and the dead, and he knew after that catastrophe that he could no longer simply let things be. So he began to train, to contemplate his nature as an Iramasha, and through intense search he found the corpse of his own predecessor, laid in a skeletal grove in the Iramasha Realm.

It was in this place, under the cold and empty gaze of his predecessor's skeleton, that Langellan trained to fight for the good of all skeletons. They deserved better than what had been seen in the war, didn't they? He needed to grow stronger, to grow more powerful, and he spent not only the next centuries training, he learned the secrets of his predecessor as well. The power of the Iramasha of Skeletons was not one to be taken lightly, and when Langellan had come to hate everything he had tried to achieve, suddenly a spell was cast upon him; the Castle Greyskull, pulling upon the might of all the skeletons in that grove. The spell was a powerful barrier, allowing him to train for thousands of years without even a single minute passing. Such was the might and the care of his predecessor's skeleton.

For millennia, Langellan honed his body, his mind, his spirit. Even when he could not develop all of his techniques to their true peak potential, it did not matter, for he had managed to achieve something that he percieved as far greater. A merger of himself with the very nature of skeletons themselves, and with that potential unlocked, having trained for thousands of years in the skeletal walls of the mighty Castle Greyskull, Langellan knew it was time to depart to Earth.

EQUIPMENT
○ Havoc Staff: The Havoc Staff is, by all accounts, one of the finest pieces of Iramasha craftsmanship ever to be seen by mortal eyes. Forged with the skull of the previous Iramasha of Skeletons, the staff is filled with an extreme amount of power that can be utilized for any number of spells. As it carries the head of his previous incarnation, Langellan is capable of casting even spells he doesn't actually know simply by willing the effects through the staff. In a nutshell, Langellan can accomplish nearly any effect with this staff, though with the chief downside that it costs a great deal more energy than a similar effect would typically require, enough that he can only utilize such a spell once per post.

RACIAL ABILITIES
○ Ether Lock: Having undergone extensive training under the tutelage of his predecessor’s skeleton, Langellan has moved past the need for the typical Iramasha release states. He has instead built up an extensive system of power increases and attunement with his Aether Class, which blurs the line between Aether Arts, Aether Magic, and Ether Morph, which he has deemed Skeletor Uprising.

○ Aether Class Abilities: Langellan realistically does not have much in the way of abilities tied directly to his Aether Class itself. However, he is capable of drawing power externally from skeletons in the area, in much the same way that most Iramasha can utilize energy from ambient Aether energy. Because of this, he is much more powerful in places with high concentrations of skeletons.

AETHER MAGIC
○ Castle Greyskull: A spell inherited from his deceased predecessor’s skeleton, the spell Castle Greyskull creates a tremendous skeletal barrier by utilizing the innate energy that Langellan can draw from his own Aether Class. In theory, Castle Greyskull is capable of creating a barrier which stops even time from entering, a place where he can train indefinitely. However, at Langellan’s current level of power, this would require a density of skeletons that simply is not found naturally anywhere on Earth. Only some sort of subterranean catacomb filled with decorative skeletons and buried under a European capital city would likely have the sheer amount of skeletal power required to stop time utilizing this spell, and even then, it would end the moment that Langellan ran out of energy or perished.

○ Bonestorm: By summoning a whirlwind of bone shards from his own body, Langellan can create a zone of extended danger to anyone who enters. This area currently fills a zone up to 100 meters, though if he condenses it to an area smaller than this, the damage can become increased. While it cannot pierce those whose durability is equal to or above his Aether Magic skill, this spell also lasts several hours, and as such is used more as a way to create a beneficial environment rather than for full offense.

SKELETOR UPRISING
○ Skeletor Uprising: His so-called "final" technique, this is actually generally the first spell that Langellan casts in any given fight. By channeling the power of bones into his own body, Langellan is constantly regenerating by using any skeletons that happen to be in the vicinity. Broken bones replace themselves with fresh ones, and even small structural breaks are quickly repaired with small pieces of bone pulled from other sources. This, of course, would normally be a rather tremendous drain on his energy, but utilizing Skeletor Uprising is only the start of his full potential, as once he casts Skeletor Uprising, he is capable of casting Skeletor Uprising II in the next post.

When entering into Skeletor Uprising Genesis, Langellan grows to a whopping 10x power increase, and additionally can now externally manifest the bones he has assimilated into a wide assortment of melee weaponry. Of course, in addition, he gains access to his two final spells, but can only cast one of them; Skeletor Heavenrising Climax, or Skeletor Hellrising Ultimus.

○ Skeletor Heavenrising Climax: When casting Skeletor Heavenrising Climax, Langellan's Durability is immediately dropped to Untrained, and all of the skeletons that he has assimilated immediately expel themselves from his body. Paradoxically, this leaves him with a fleshy form, that he by all accounts considers unspeakably ugly and lacking in any aesthetic value. He is fragile, weak, and the only meaningful ability that Skeletor Heavenrising Climax provides is that he is no longer limited to melee weaponry as he externalizes the bones at his disposal. Rather, he can utilize them for an extreme degree of ranged attacks, whether this by turning them into myriad darts that rain down or even firing off beams of his own Aether energy from them like rays.

This spell lasts for one post, at which point all of Langellan’s energy has been expended, and he falls not only into his base form, but into Skeletor Downfall.

○ Skeletor Hellrising Ultimus: A sacrificial spell, Skeletor Hellrising Ultimus accepts that even the skeleton, which is the foundation of life itself, must some day turn to dust. This spell allows Langellan to destroy his own accumulated skeletons and turn them into raw Aether energy for a single post, granting him functionally endless creation of melee weaponry, as well as utilization of the Havoc Staff, for that one post. He maintains the physical increase of Skeletor Uprising Genesis, as well, making this a spell that should not be trifled with.

Much like Skeletor Heavenrising Climax, this spell leaves Langellan in the state of Skeletor Downfall after one post of use.

○ Skeletor Downfall: A pathetic state, in this form Langellan is given Untrained in all General and Iramasha skills. The only ability that he has is to cast Skeletor Uprising, which will restore him to his standard form once he finds new skeletons to utilize. Being that there are no skeletons in the area after the usage of either Skeletor Heavenrising Climax or Skeletor Hellrising Ultimus, this means he cannot return to his normal state in a thread after utilizing those forms.