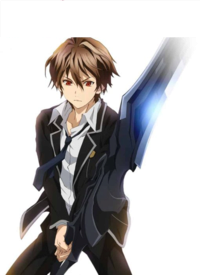 I. The Host's Basic Information

» Appearance Written: (Just write down what your Ziamichi looks like if you lack a picture or want to work on this section.)

» Appearance Picture: (If you have an image, feel free to post it here. If not, remove this)

I. The Host's Personality

» Personality: (You will need at least two paragraph's on your characters personality to make it passable.)

» Likes: (This is self-explanatory. What does your character like?)

» Dislikes: (This is self-explanatory. What does your character dislike?)

I. The Host's History

» History: (Three paragraph minimum of your characters history; also include how they became a demon via birth or they were changed to one though a deal est.)

» FOR THIS SECTION OF THE APPLICATION PLEASE TAKE POWERS FROM EITHER THE SHINIGAMI, DEMON, IRAMASHA, HUMAN OR QUINCY TEMPLATES ON THE SITE! OTHERWISE, LEAVE THIS BLANK OR REMOVE IT IF THEY DO NOT HAVE ANY!

I. The Spirit's Basic Information

» The Spirit's Written Appearance: (If you lack a picture or just want to write a look for your spirit, place it here.)

» The Spirit's Pictured Appearance: (If you got an image for your spirit, post it here.)

I. The Spirit's Personality

» The Spirit's Personality: (What is your spirit's personality like? Write at least two paragraph's.)

I. The Spirit's History

» The Spirit's History: (Is there a history to your spirit? If so, at least write 2-3 paragraph's about it. Including how it got attached, created or sealed to your Ziamichi.)

I. The Spirit's Powers

» FOR THIS SECTION OF THE APPLICATION PLEASE TAKE POWERS FROM EITHER THE SHINIGAMI, DEMON, IRAMASHA, HUMAN OR QUINCY TEMPLATES ON THE SITE! OTHERWISE, LEAVE THIS BLANK OR REMOVE IT IF THEY DO NOT HAVE ANY! IF YOUR ZIAMICHI ISN'T A RACE FROM HERE, THEN JUST FILL OUT THE ZIAMICHI POWERS SHEET BELOW OR OMIT IT!

» Unique Traits: (What kind of special ability's does your host get from you're Ziamichi's powers? For example, if your spirit had a fire ability, it's possible your character's body can pick up on that! Or if the spirit was an animal, they could possibly gain better natural senses.)

» Forms: (How many forms, if any, does it take until the host reaches it's limit, full power and a risk of having the demon, dark side or other entity gain control of their body? If you have a good understanding with your spirit, though, this is typically a good thing)

» Drawbacks: (Is there any side effects to the usage of these combined powers? If so, put them here.)

» Equipment: (If your character has any equipment, then you should put it in this section. Otherwise, if they don't, do not fill in this section and you can leave it blank.)

» Ziamichi Host Class: (Ranging from E to the weakest and A to the strongest; With S being a special class of Ziamichi's. Don't do anything to this section, as staff will determine how strong your Ziamichi Class is from tier once approved. And yes, the Host can sometimes be stronger then the spirit.)

» Ziamichi Spirit Class: (Ranging from E to the weakest and A to the strongest; With S being a special class of Ziamichi's. Don't do anything to this section, as staff will determine how strong your Ziamichi Class is from tier once approved.)

Click the spoiler to learn more about Ziamichi Classes

Spoiler:
Summary: There is a class system established across most Ziamichi across varies sectors in The Soul Society, Earth and even within some of the Nuevo Espada, Sin Fall and Kokuryuteshi. Most Ziamichi's that are in this vast database are classed from E- to S+. E-, obviously, being the weakest, and S+ being the most powerful Ziamichi on this list. These individuals are given these ratings ranging by The Yayjuu along with the Special Human Task Force in an attempt to rank how powerful their ability is. The rank is determined by a series of tests, studies, lectures, medicines, body simulations, training exercises, data gathering and potential a person has . This process usually helps cases where The Yayjuu can help treat Ziamichi's that come to their doors.

According to The Yayjuu's leader, Shadin Yuudeshi, this system is even used to rank some Shinigami, Vizards and Arrancar due to the similar nature of relying on spirits to give them their power. The whole purpose of this system, however, is to find out who is at what level, attempt to raise it, get their mind straight and make them the best warrior they can possibly be.

Class E- to E+: These are typically the weakest Ziamichi they have on the database. However, compared to most human's, they still considered to be somewhat special. Most of these Ziamichi's are people who get infected by the vast of amount of demon's in the land, develop their own inner spirit somehow or their spirit is pretty much weak. More often then not, E class Ziamichi are around 4-3 to 3-1 tier

Class D- to D+: More or less, this is the middle class of Ziamichi as most of them are ranked at this level. They are often able to do Shikai, fight on par with Shinigami Captains, take on many pack's of Demon's and Hollow's and are considered the backbone of the Yayjuu and Ziamichi Race. Most of these Ziamichi's typically have stronger beast's and more often then not have more control over their spirit's. Most of these Ziamichi's at 2-3 to 2-2+ tier.

Class C- to C+: These are considered to be more upper class Ziamichi. Some Ziamichi's are able to reach this level, making it slightly above average. These Ziamichi are on the verge of unlocking their Bankai, Golden/Hell Angel Forms, becoming very skilled Ziamichi's or close to becoming B class. They are considered to be some of the more leading forces after the D class Ziamichi, sometimes being seen as their leaders. Most of these Ziamichi's have enough control, power and training that they are occasionally seen taking on Captain level. Typically, these Ziamichi are 2-1 to 2-1+ tier.

Class B- to B+: This set of Ziamichi who are equal to a Shinigami who has finally learned Bankai. Once a Ziamichi reaches this rank, it can be hard to level up, making them somewhat of a semi-rarity. They are often seen as the first line of defense when Classes D through C fail. Alot of these Ziamichi's, though, can be seen with some very chaotic host's or difficulty with their powers. Most of these Ziamichi are seen fighting on par with a new or seasoned Captain of the Gotei 13. As such, most Class B Ziamichi are clocked between 1-3 to 1-2+ tier.

Class A- to A+: Considered to be the peak for most average Ziamichi, this class is seen as veteran type Captains. Class A Ziamichi's have either mastered alot of their powers, contain a seriously powerful spirit or have perfected their spirit's powers to an amazing level. Alot of these Ziamichi's can take one or two Captain's at a time and even wipe out some hordes of Demon's and Hollow's. With that being the case, most Class A Ziamichi's are between 1-1 to 1-1+ tier.

Class S: Known as some of the most powerful Ziamichi out there, S Classes are guarded with a very high respect around the Ziamichi community. They have gone above and beyond the command of power, their beast's are typically frightening in power and their sense of control is rather great. This group of Ziamichi's can fight on par with most Espada, protect large cities and guide weaker Ziamichi's down the path of control. So, Class S Ziamichi's are ranked between 0-5 to 0-4+ tier.

Class S+: Class S+ are feared and respected for their power. They are considered to be Super Powered Ziamichi's in the world. It is the highest current class that a Ziamichi can possibly achieve in this realm of existence with only a handful of people who have been given this rank which just shows how difficult it is to get to this level. Shadin Yuudeshi is a prime example of how extreme this level is. For the majority of Ziamichi's obtaining Class S+ would be a dream and a lot of people are jealous of those who are even at S level.

For few who have achieved Class S+ they are generally considered as monsters as they have enough power to fight alone against a military force on equal terms and even non-Ziamichi's tend to sometimes hate them as they are at the top and believe all Class S+ users look down on people below them, especially people who have no power and consider them trash.

Class EX: This has been debated by those within The Yayjuu and even other orgs, but some people, even Shadin himself, believe that it is possible for rare set of Ziamichi's to attain Class EX. To attain this level, some people dare not imagine what would be the power equivalent would be, only that it would be an impossible amount of power that is on par with The Soul King or Kin Iramasha. Though, some people wonder if that's why The Yuudeshi Network was created as it's known Shadin Yuudeshi can accelerate his own powers and along with others whom he trust's.

(To Find Out about what these skills are for, please READ THIS THREAD before you try doing anything to it)


Will Skills For Host


Will Skills For Spirit

END OF THE ZIAMICHI APPLICATION

Permissions in this forum:
You cannot reply to topics in this forum
Who is online?
In total there are 21 users online :: 0 Registered, 0 Hidden and 21 Guests