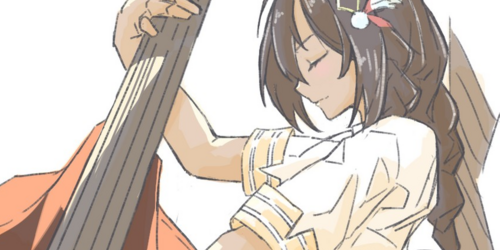 To say that Rio was the equivalent of a deer caught in headlights would be a profound understatement. A single word had yet to pass her lips before Igen, quite literally, swept her off of her feet, carrying her in his arms. A quick shade of red visibly reared its head, eyes popping open like saucers as she stared up at him.

What threw her for an even greater loop than this action alone was the degree of unbridled passion he spoke with, dismissing her worries about what the servants thought of her enjoying a night out for once. A stronger shade of red filled her caramel-colored cheeks as she struggled to speak, stunned into silence by his words.

It didn't exactly help that she was dealing with a hangover, either. Her body felt so unsteady right now. She had a headache, she felt exhausted, and worst of all, nauseous. She wanted to throw up so much, but held her body together, composing herself as she listened to Igen continue to speak.

As much as that noble aspect of her soul tried to cry out that this felt wrong, that this looked unbecoming, hearing the heartfelt words that shamelessly escaped Igen's mouth had singlehandedly turned her worries on their head.

To be quite honest, it felt surreal. Even amidst her peers in those halcyon days at the academy, they always regarded her with some sense of tactfulness, always asked her if it was okay to conduct themselves around her naturally since she descended from noble lineage.

They were always mindful of that, and it certainly annoyed her. She didn't exactly make things any easier by choosing to pursue her own path, one that didn't involved the Gotei United to any degree. However, she couldn't believe what she was experiencing right now. Igendai couldn't care less about her nobility, viewing her only as the friend with whom he shared an adrenaline-fueled spar and a nightcap of alcohol.

A force of nature - that was the most apt descriptor she could offer. She was a immovable shield but he might as well have been an unstoppable force in personality alone. The visible blush, along with any embarrassment that it accompanied, slowly settled down as she allowed herself to laugh - as best as she could manage currently - unable to believe the type of person who now proudly called himself her "homie." The laugh was more akin to a giggle, though. She didn't want to do anything that might make her any more out of sorts than she currently was.

"Its over there," Rio commented pointing towards the door that would lead them back into the estate. She gave up on trying to fight back. Perhaps, a result of believing Igen would probably get even more boisterous than he already was. Still, a heartfelt smile lined her lips as he guided her forward.

Of course, she certainly wanted to say more, but all other conversation could come after she consumed water, and got over her hangover. Even if she wanted to regret it, this charismatic spirit had seemingly made her feel happier than she would have expected, as if she was acknowledged regardless of the mistakes she perceived as running counter to noble etiquette.

Thankfully Igen was not privy to all the thoughts and metaphors going through Rio's hungover little head. Truth be told, if he DID hear that whole unstoppable force and immovable object metaphor, he'd probably say thats pretty gay bro. STILL! He couldn't help but grin just a little at the thanks cast his way.

"You okay Rio? You don't gotta thank me for bringin you inside, It'd be kindof an asshole move for me to just say 'thanks bye' and leave you on the grass." He chuckled, shaking his head as he allowed her to guide him toward the estate. "Besides, you're pretty light anyway. WAY lighter than my homie Kyo at least. MUCH easier to carry, softer too." He pointed out. After all he WAS holding her by her back and thighs. Not like trying to lug around Kyo's big brick-shithouse ass. It didn't take long for him to slip inside, and with some guidance from Rio, find the nearest kitchen sink. And HOLY SHIT! Boy was it big! And empty! Quite auspiciously, it was not the main kitchen. Which, whew, would that be weird to explain if he ran into someone!

He settled the woman next to the sink and promptly filled a glass with water and passed it to her, letting her chill and potentially empty her stomach into the sink itself as he himself kinda looked around, admiring the scenery and...pondering why she seemed so dang...happy? She wasn't anything like Kyo. She made it sound like just....simple acts of enjoyment weren't allowed in her family. Was it because it was one of the big four? Five? Whatever it was these days. Hmm. Maybe he'd ask Kyo about it. After all, this girl didn't seem like the gossipy type, she might not know about like...the general state of nobles. It was funny to ponder about to be sure. But he didn't mind that. Frankly he was just happy that she was having a good time. HE couldn't help but smile to himself and hum gaily along to some tune in his head, waiting patiently for Rio to sober up and get over her hangover. NAturally once he knew she was alright, he'd let her get back to.....uh well....whatever noble women did? Did she have like ...meetings? He didn't know. But surely she'd want some time to like, freshen up and all that. Maybe have her servants redress her or something? Noble stuff.

Either way, he knew two things for sure: First, that he was definitely gonna hit her up again to hang out. Mmmmmmaybe with less booze. A lot less booze. And Second? He was TOTALLY gonna tell Kyo about this. And hopefully get some tips about the do's and dont's of like...noble ettiquette. Cuz sure, he was a careless guy, but he didn't want to like...step on a sacred bush and get executed or something. Just some big no-nos. And also maybe a little bragging that he got to trade punches with Rio Shihoin. Eheheh, that big idiot was gonna be sooo jealous~

There was more to her thank you that Rio wanted to explain, something that went way beyond the vibrant shinigami carrying her towards the kitchen. Of course, any will to do so was simply defeated by a desire to push through this hangover.

The moment Igen set her down, she immediately turned to the sink, emptying out her stomach. It wasn't particularly the finest sight, but fortunately, no one was present enough to witness her throwing up besides Igen, and, she doubted he cared to any real degree.

As she allowed her stomach to settle, Rio couldn't help but to marvel at how surreal this felt still, how her past self would react to experiencing their first hangover after a night of acting as if she were one of the boys. Truth be told, it made whatever effects that were assaulting her feel like little more than a minor nuisance at this point.

Igendai was right. Didn't she deserve some level of comfort? To live a little? Rio would take the cup of water as she went over to sit down, taking a few mouthfuls to wash the sour aftertaste out of her mouth. She took a deep breath, two... three... and four. Slowly but surely, the effects of the hangover would settle down.

Her natural sense of movement returned, too. No sooner than she could walk properly without stumbling, she would quickly go through the morning routine. Cleaning her body to wash away any dirt on her body, along with any dry blood on her noise. Renewed in body and spirit, Rio redressed herself within a kimono that felt comfortable enough to wear around the estate.

Rio would look around the estate, wondering where Igen was at the moment. Her schedule was not particularly busy. One of the perks of not being the head of the Shihoin. Her schedule may as well be an open book at this point. If nothing else, she hoped to be able to get something off her chest. She was grateful to him in more ways than he could imagine.