You Spin Me Right 'Round, Baby (Elyss/Shishiyuki/Makoto) 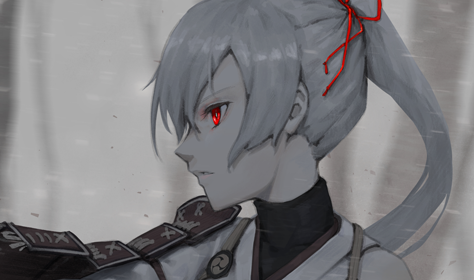 MAKOTO ARIMA
"History lessons? I am a zanjutsu instructor, not a history instructor."

For a brief moment there was the faint question of whether Elyss was actually trying to antagonise her intentionally by not even requesting her specialty of training but it was just more likely that she was earnest and maybe, just maybe she could forgive that more.

At the same time though it was an irritating thing to have to deal with. She knew a lot and realistically she could've gone out of her way to do this but there was the simple fact of the matter.

Why? She owed her nothing and had just about zero reason to go out of her way for it.

"I don't think you can help me there. Trust me. Not even the Captain Commander could help me, and I'd never submit anyone else to Tenmarin's ire."

Despite giving Makoto a small smile, the mere thought of her Zanpakuto seemed to leave Elyss looking extremely conflicted, a shadow dwarfing her gaze before she closed her eyes and bowed her head. Her hands came up, clapping together as she lowered herself, prostrating before Makoto.

"I know things aren't the best between us, and I may seem like an irrational brat who's only capable of breaking things and getting on everyone's nerves, but out of everyone here, I know your character, Miss Arima. Even if it's not your area of expertise, if there's anyone I can trust, it's you."

The mere fact that Makoto could refuse is the exact reason Elyss wants her help. Anyone else would most likely fold because Elyss is a Captain, but Makoto wouldn't fold because of such meager politics. If anything, this decision is purely based on what both women know about one another, and that is what makes it immaculate.

MAKOTO ARIMA
What the heck? Makoto's expression contorted from its tight scowl into a confused and conflicted look. It was really a mix of disgust and discomfort at the gesture of Elyss bowing like this in front of her. Did she find it pathetic and pitiful? A little and it evoked no small amount of frustration that this was happening in front of her girlfriend like it was some kind of stunt where she looked bad for not accepting such an apology.

"Whatever, get up already and stop looking so unbecoming for a captain. A student will see you."

She muttered and looked away to stare off in the distance. Honestly, this woman. It was infuriating to her really.

Eh? Elyss rose, tilting her head a bit. Unbecoming? Well, she never thought of it that way, but guess she shouldn't be so, uh, unbecoming. Well, you can't just take a gal off the streets and expect her to just be some exemplary person for everyone below her. However, she couldn't help but fold her arms and give a somewhat downtrodden look towards Makoto.

"I mean, I'm just a person like them. I don't think anyone's too above trying to apologize and ask for help, but I guess that's why I need some help. I'm no good at honorifics and all this Captaincy stuff. All the other Captains just seem to move at their own flow too, so it's impossible to know what exactly to do."

With a sigh, she couldn't help but look over at Shishiyuki and wonder if she even handled that situation correctly. It seems it was helpful to the Noble, but could all of that been done in a simpler manner that didn't leave her looking like a mummy?

MAKOTO ARIMA
"And why would my opinions on the matter be of importance then if all the captains behave however they please?"

She did make a point that the captains operated in their own ways, Makoto wouldn't pretend that Hakuyou was the gold standard for her of a captain's behaviour and under any other current captain she might've torn her hair out chasing after them or dealing with needless eccentrics.

"Hmm? Because they matter to me."

Elyss couldn't help but say that as if it was just an obvious fact. This whole situation exists because Elyss thought it worth going through. Elyss could have gone to literally anyone, but she's here asking Makoto for help. At the end of that complicated tunnel that hoists their relationship, Elyss can't help but see Makoto as a friend. Maybe not in the literal sense, but if push comes to shove, Elyss knows she can depend on Makoto in those crucial moments.

MAKOTO ARIMA
Hmphf. Makoto was loathe to admit that she had no real retort to Elyss' statement but it didn't change her disgruntlement about the situation all the same. The woman continued to be a frustrating headache to the petty vice-captain that had no interest in making good, they were shinigami whose mutual interests aligned by nothing except role not friends.

"Whatever appeases you I suppose, Captain Kishimoto."

Well, if it is, Elyss kept herself cool and collected. Makoto wouldn't like it if she gave the situation anymore oomph than it already has. However, this is a good time for a bit of celebrating. Elyss'll be sure to drink a bit tonight. Though, she's also just in the mood to drown out some of the nuisances that come with being injured, like the slight ache everywhere. Alcohol does well at numbing that.

"Great. Well, I guess I should get back to Shishiyuki. Got a bit more I need to discuss with her. See ya later, Ma- Miss Arima."

KOIZUMI SHISHIYUKI
Back to her, hm? Shishiyuki turned her attention back to Elyss, though naturally she didn't go through the full greeting again or anything of the sort. She naturally assumed there was more to discuss, though whether it was related to the Gotei or to something more interpersonal was anyone's guess.

"Is there something else I can do for you, Captain?"

Admittedly, Shishiyuki was fully aware of the strife between her girlfriend and her captain, but that wasn't something she wished to step into unless it was necessary, least of all in public. Not out of any sense of propriety, of course. It simply wasn't her issue until one of them deigned to make it her issue.

Elyss stood there for a second, her eyes bouncing between Makoto and Shishiyuki, almost like she's gauging something. However, she doesn't say anything that could prove jeopardizing. There are better things to question than what another person finds attractive. She just didn't peg Makoto as the gay type at first, but she can definitely see it now.

"You're going to be my Vice Captain, Shishiyuki."

And, with that, Elyss is ready to head back home and rest. Her body's starting to disagree with her.