I Look Forward to Getting to Know You [Sawachika Family, Igen] 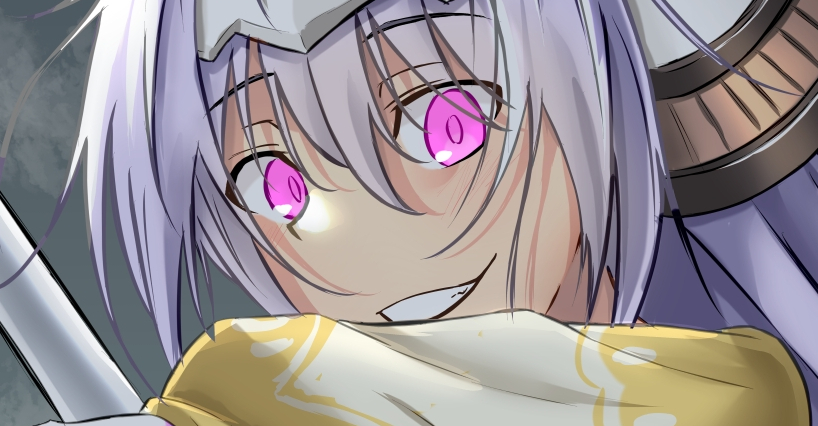 LADY SAWACHIKA
That was a smart little gambit he'd tried there. If Lady Sawachika were a younger and more inexperienced woman, maybe it would have even worked on her. But she'd fought with the best, and she'd seen every dirty trick in the book in her time. As Igen went to sweep her leg, her eyes darted downward, and she dealt with the sweep in the only way a woman like her knew how:

By simply meeting the blow directly.

Her kick wasn't exactly gentle, of course. It was easily enough to shatter stone, but if he couldn't handle the sort of blows that could kill a man, then Igen wouldn't last in this household either way. Whether or not his leg was still in working condition upon impact, however, Lady Sawachika followed that stopping blow by simply punching forward, wholly unconcerned with either of the weapons in play here. After all, her fist would certainly break through either obstacle without much trouble, and unless Igen dodged, it would follow through right into his chest.

Ow. The sharp impact of that foot plowing int his leg startled him! And furthermore, in that next instant, the woman's fist plowed clean through the chair infront of him and he felt a sudden rushing blast of adrenaline course through his body as he barely managed to avoid the fist going for his chest! His weapon promptly obliterated as tumbled, having thrown his entire body into avoiding the attack and with h is leg having taken the shock of that hit, he hit the ground with a loud THUMP!

Igen was a sturdy man, of course, and those blows which would have killed your run of the mill shinigami managed to be much less lethal, but he wasn't some sort of monster. He didn't have any abilities to further keep himself up, and as he dropped to the ground and rolled back, distancing himself, he winced. Under normal circumstances, he'd be able to more or less mitigate this kind of damage with his Kaido. But she was just too fast! HE could already feel a sharp pain in his leg from the kick, nothing too serious, but it definitely was going to be making things harder, and already being slower than the woman, and well, having lost his weapon. He still had HER weapon but well...

He sprang back up to his feet, backing off slightly before he laughed. A lighthearted chuckle as he glanced briefly at the shattered chair. "Well that sucks. But hey, A for effort." He chimed, before his body faded in a blur of motion, a shunpo promptly closing the gap between him and the woman as he promptly CHARGED straight into her! He expected another forward punch and he was already channeling Kaido into his right hand. She had a brutal, direct fighting style, if nothing else she was consistent right? He anticipated another one of those devastating punches and had every intention of catching the woman's fist! He was fairly strong and even tougher than he was strong. But well, he had a feeling it still wouldn't be an even match. So he was already set up to heal whatever damage the catch was going to cost him. His arm, elbow, and shoulder ready to take care of themselves. All this so that he could put all of his strength into tugging on that arm and then slamming his forehead into hers.

It was kinda clear that he was outmatched here! This was a brutal woman and frankly, she outmatched him. But the grin on his face reflected none of that. Any notions of getting to Miki weren't currently in his head. Despite any impressions that Kyo may have given the family, he wasn't here to win. He'd already won. He was here, in this house, getting to test himself against the Sawachika. Plenty of other suitors would be shaking, afraid, anxious. Maybe wallowing in this indominable wall that was Ai. Lamenting that they weren't going to be going any further. But Not Igen.

Getting to meet Kyo's parents had been plenty of a reward. Getting to FIGHT a fucking fine, vicious woman like Ai?

A voice crackled through his limbs, through his muscle. Through every fiber of his being. But he ignored it. Some small part of him recognized what that voice probably was. But Igen was having WAY too much fun to pay it even a shred of attention!

LADY SAWACHIKA
Oho. Now that was an approach that Lady Sawachika could only ever admire. She knew that there were any number of ways that she could outmaneuver the attack coming for her, but why would she do that? This young man had the gall to charge straight for her, prepare to meet her fist directly. If that was what he wanted to do, then she would gladly meet that challenge with all of her might. Once more, her fist shot forward, snapping much more sharply toward him. Even as it was caught, she grinned to herself, her mind having gone to every bit the same place as Igen’s had.

As he drove his head forward, so too did she, and the impact of the headbutt was quite radically harder than it would have been otherwise because of her effort. A faint shockwave pushed much of the gravel in the zen garden away, and without moving any further, Lady Sawachika simply spoke, her voice calm and collected even after all of the intensity of the moment.

“We’ll have to do this again sometime. But I don’t want to keep my daughter waiting.”

Of course, if Igen continued to fight, Lady Sawachika could certainly keep up. But she was perfectly satisfied with how things had gone to this point.

Oh wow, that hurt. Igen's head SPUN as it collided with the clearly-stronger woman. And for just an instant, he blinked owlishly. He was tough, tough enough to NOT get concussed or...you know... have his head cave in or anything like that. But that hard impact still broke the skin on his brow, and Igen staggered just a little, his other fist raised, the other hand STILL holding her fist, as he readied himself to start slugging!

But it seemed there was no need for that! To his surprise, the woman relaxed, that voice suddenly calm as she called an end to the bout. Oh....right...why he was originally here. Aaaand his forehead was pissing blood, a steady stream down his face, aaaand...well that was his nice shirt. Hm... maybe he shoulda padded his head with some Kaido, but wELP! Hindsight and all that! He released his grip on the woman's hand and gave a chuckle, reaching up and promptly healing the cut closed. Though he kept his hand a bit there. He had to make sure all the blood vessels healed or his head would still bruise.

"Much obliged, we'll totes have to do that sometime. Maybe we can all go out for drinks sometime! Your husband like Umeshu?" He ventured with a chuckle, ignoring the headache he had. Yep, yepyepyep, that was gonna hurt for a while., But he worked through the pain, standing up and .... well...Kaido wouldn't help with the blood all over his front. Or his face. That he just wiped it off on his sleeve.

"Whew! Uh....where to next?" He asked, looking around. As if expecting said sister to be waiting with some new manner of test for him.