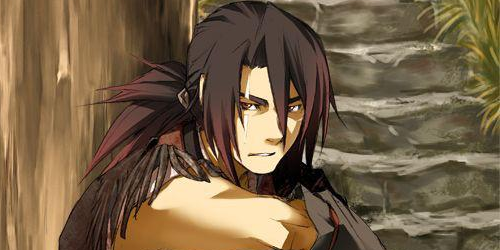 KAITO TOMOYUKI | GHOST OF THE RUKONGAI
When she snorted, Kaito mentally prepared himself for ceaseless mockery. But, instead, she actually kind of commended him on it. He gave a shy smile in return, before finally breaking the stance and sheathing his sword. The idea of testing out different weapons to try and train his muscles was an interesting thought, but, as Kaito turned to look at the weapon laying there...he walked over, quietly picking it up and taking it in both hands.

"This one should be good for now."

It was a decent bit heavier than his Asauchi, and he was fine with it. Perhaps it was because of how much this simple wooden sword meant to him, but, if nothing else, this was a good place to start. Maybe he'd switch it up later, but, for now, this was good for him. His attention turned back to her as she made note of a regiment that he should abide by.

As if she read his mind, Kaito felt a little embarrassed as she smirked at him, giving a sheepish smile. Had she not told him that, there was a very good chance that he would have done exactly what she mentioned: extra training to try and grow faster, ignoring that he would have become too used to something so heavy, when the real thing that he would use so often would be practically weightless.

She raised a brow slightly, but she could tell there was some sort of sentimental thing going on with him and that wooden sword. Weird, but well, she wasn't gonna argue. If the thing didn't correct that shaking, she'd take another look and then just make corrections as needed. It'd work itself out with time. "Excellent." She chimed, that smile widening a little more when she saw his reaction.

Oh she knew that face, that guilty 'you read my mind' look. she chuckled lightly at his stammered confirmation and gave a nod of her head. "Good. Then for the time we're all good. I'll come up with a proper plan for improvement. It won't be perfect at first, more like a general framework. But over time we can fine tune it to whatever works best for you. Now that you've had your initial evaluation, you can sign up for a weekly slot at the tutoring board back at the academy. Find an open slot that works best for your schedule and we can go from there. Just know that if you sign up and the day you want is less than 48 hours from the day you sign up, then the first session will start the following week. I need notice and all that jazz." She explained calmly enough, brushing herself off as she stood up to her full height.

KAITO TOMOYUKI | GHOST OF THE RUKONGAI
At first, he had been hesitant to seek tutoring and further instruction. A matter of pride, yes, but, it was never easy to admit that one needed help, no matter what that help was for. But, when sheer stubbornness isn't enough, there comes a time when you just need to suck it up and get help. It had paid off, as Kaito now felt more confident in what he understood, and it would just take time and diligent practice.

So, with a solemn nod of his head, Kaito's smile shifted to something more genuine and confident.

"Understood. I'll definitely look into that."

It felt good to have an idea of how to correct these mistakes. Even if it would take time, knowing what he needed to do made the process a lot less stressful. He'd definitely look at signing up for a weekly tutor slot to continue. But, he also needed to make sure he wasn't overdoing it, and keeping to that regiment that she had assigned him. Tucking the under his arm and picking up his book, he turned to face her again, shaking his head.

"No, not right now, at least. Thank you for your time, Miss Aiban."