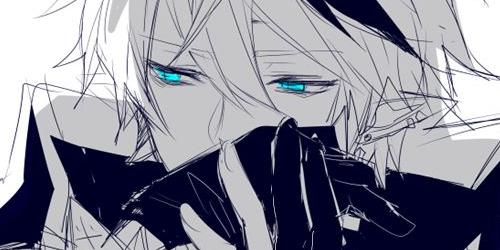 VANYEL XIAOYANG | DRAGON OF KYUSHU
The path of a devil wasn't fit for mortals, huh? Maybe. Or, at the very least, it wasn't fit for him. Maybe, at the end of this road, at the last bits of his human life, he'd be more ready and willing to go back on the path of a devil. The end of one life, and the start of another. But, that was a thought for much, much later.

It's not your fault, Vanyel. Don't ever blame yourself for that.

His eyes began to close, narrowing slightly as his head lowered for a moment. He didn't say anything. His hand just slowly tightened it's hold around hers, nodded, and embraced her just a little bit tighter. It wasn't going to be easy. Doubt cast on his mind and heart at times prevented him from believing that Calypso ever truly loved him, doubted that it wasn't his fault.

But, he would still try.

"Is it alright if I check in on ya from time to time, through the Seal, or just...visit in person? Neither of us want to lose this...what little we have left. I'm already tryin' my best to take care of Ari and look after her, and..."

His voice lowered as his hand squeezed hers tightly, embracing her with just as much strength.

Posting Music:
https://www.youtube.com/watch?v=jtPym3pK7fQ&list=PLWQj2AH21DwCzgo5nMP4ZVi3Fabqfm03r&index=28
Vanyel's grip seemed to tighten around the demoness as he was preparing for something to say. She could tell that whatever the demon wanted to speak of would be from the heart. So, one of her tendrils slithered from the abyss and gently patted the top of his hand as she just waited and relished the moment. No sense in rushing things, huh?

"My home is open to you whenever you wish. All I wish is that you give me some warning beforehand, ya knucklehead."

Snorting a bit in her laughter, the woman tried to regain some of her cheerful demeanor from earlier before the air drenched in the two's sorrows. Yeah, things were pretty fucked up, but they still had each other. So, for the time being, both demons needed to be content. However, the future was a chaotic and uncertain beast, and there is no telling when she may rear he unstable head. Hence, the demoness yawned and began to lie down, setting Vanyel with her.

"What, ya tryin' to charm a girl or something? Of course, ya can stay as long as you want. If I wanted ya gone, you would have had a boot to the head by now."

With her eyes closed, Mana's tendrils ruffled his hair for a moment before she pondered and just spoke her mind.

"After all, with all my family mostly gone, I gotta spoil someone, right?"

VANYEL XIAOYANG | DRAGON OF KYUSHU
He chuckled, a bit embarrassed how he sure did just show out without warning. But, with the subject matter, it was at least somewhat understandable. In this moment of tenderness, however, Vanyel felt himself relaxing, the sorrows beginning to alleviate, albeit only slightly, in the arms of another.

As the two began to lie down, Vanyel gave a coy wink as he chuckled, then spoke.

"Unintentional, but not unwelcome."

He was hardly a flirt -- he just spoke, and it ended up that way. It was rather ironic how this had happened twice now with two of the Asthavon women in his life. First, with Algos, and now, with her mother. Life had been strange for him these last few years. Ruffling his hair, Mana's last comments brought a slight smile to his face, the devil queen's yawn becoming rather infectious, yawning himself as his eyes began to close.

Posting Music:
https://www.youtube.com/watch?v=jtPym3pK7fQ&list=PLWQj2AH21DwCzgo5nMP4ZVi3Fabqfm03r&index=28
Getting so cozy with the devil, huh? This demon was quite interesting. However, it wasn't boring to Mana when it came to the nature of Vanyel. Perhaps she was missing having those in her family to spoil, and maybe he missed the embrace of his wife, yet it ultimately didn't matter. Both of them were here in the moment, and she'd savor it like the gluttonous demonic beast she was.

So, as the two started to feel their bodies drift off into slumber, Mana grumbled and formed a bed for them both to sleep on. It wasn't anything fancy, just a black circular bed with emerald green markings made from the shadows of her maddening power. When it was forged, they already had the covers around them, and the demoness held him under her bosom before stroking his snow hair with her claws.

"Intentional, unintentional; I don't care. I'll still spoil ya rotten. So be careful."

Chuckling lowly to herself, The Demoness was beginning to tire. And, without much energy to give, she drifted off into the calming abyss of slumber.

Oh, so cozy with the devil~