Noharu was pleased with the sheepish little look on Henrex's face in response to her comment. Heh, he may act like a gcool guy, but he was still an adorable little guy. Case and point his sudden flustering, blushing, and fiddling with his hair. Exactly the response she'd been looking to invoke. She allowed herself an impish little giggle as she slowed slightly, allowing Henrex to walk up alongside her rather than following along.

"Well look at you~ Puttin yourself out there. And psh, everyone thinks they're a shit partner. And most of em are right. But hey, dating isn't about being a perfect partner for the other person, it's about figurin out how to be the best partner you can be for someone. Some people got looks, other people got style, some people learn how to fuckstart their partner like a lawnmower every morning. Whatever it takes to keep ya both happy." She noted flippantly, reaching out and giving Henrex a hearty pat on the back as the both of them took their leave of the Shino academy grounds. Of course the conversation dropped a bit as they emerged out and among the students, that rough and tumble way of speaking converting to calm, reserved, polite silence as they made their way through. Truly it was night and day from when she was off duty.

Of course, when they finally DID leave Shino academy grounds, Noharu gave Henrex a sly smile. "But yea~ I'll keep an eye out for ya. Can't make any promises, but we can figure shit out as we go along. Any kinda gal you lookin for in particular?" 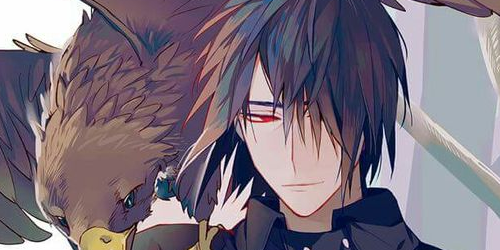 HENREX ASTILLON | STORMSWORD
For the most part, he didn't really know how to reply to that, especially not to the word "fuckstart." All he really offered at that time was a lighthearted chuckle as they ventured out of the academy grounds. He could hear the conversations of the students as they died down to silence.

Part of it bothered him that they let their conversation fall to the wayside simply by their presence, but, another part also appreciated the respect, even if some of it was likely begrudgingly. As they finally left the grounds, he could see the sly smile Noharu gave as she inquired about the kind of girl he was looking for. Like before, a hand began to idly brush away and toy with his hair as he took a moment to think.

"Well, I'm...not really sure. The idea has only really been an occasional passing thought. I'm not too choosy, and there's a lot of potential aspects to a person that I like and could work with."

He rubbed the back of his neck, his cheeks flushing red, though there was no smile, just a look of mild embarrassment and a tiny bit of shame.

"Sorry if that wasn't the answer you were looking for. Romance with me can be...annoying and complicated, sometimes."

Or, he could just be really shallow with low standards. That was entirely possible too.

Noharu snorted softly at that and gave a sly smile at his gloomy little comment. A sortof comment which frankly, she'd heard plenty of times before. It never ceased to amaze her how often, man OR woman, people seemed to think that they were somehow fundamentally undateable. But honestly, everyone was about as fucked as the others, there really were no .... fundamentally awesome people that just could be with anyone. Stuff always popped up. Differences. Disagreements. All that shit.

"PFT, as if. Trust me, Rexy, I've seen my share of relationships. Nobody ISN'T annoying and complicated.But fair enough. Wide net it is." She chimed, honestly not really having anyone in particular in mind as it were. BUT at least now she was sure to keep an eye about.