A number of bouts had already taken place and Ehefra certainly had been taking in a lot of information so far. It was a little fascinating to see so many shinigami in action given how rarely she encountered them out in the field. All the same, the environment certainly lent itself to a lot of hype and excitement. Walking out into the arena, Ehefra couldn't help but pause to glance up at the roaring crowds, smiling a little to herself as she took a moment to appreciate the sudden racing of her heart. She frankly hadn't really expected to be matched up against anyone, but it seemed that wasn't going to be a worry.

Making her way to the central pagoda in the very center of the Arena, Ehefra offered a calm smile to her opponent and offered a slight bow at the waist, offering proper respect to an opponent. "A pleasure to meet you Miss Koga." She noted calmly, ignoring the BURNING questions in her head as to just what manner of ..... uh. Shinigami she was actually facing. Ehefra herself was a little on the tall side, but she was dwarfed by most men. But she outright TOWERED over the shinigami. Were those horns real? She supposed she'd probably find out if the woman attempted to stab her with them. Even so, she held out her hand, offering it as a sign of good faith, and...frankly kinda just emulating what she'd seen a couple of others in different matches do.

Whether it was accepted or not, Ehefra would take a few steps back and form her spirit weapon. That thick band of code forming around her wrist as she began to think about what to use in a situation like this. She hadn't exactly ever had to fight for a crowd before. 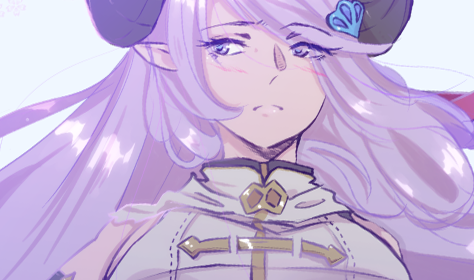 Ojo wouldn't miss an opportunity like this. Not only would she be able to experience the multitude of ways her Shinigami peers battle, but she'd also witness Quincy up close and personal. There's no telling what amazing abilities they'd be able to dish out with their capabilities. Of course, she's not as daft to forget the seriousness of current tensions between the two organizations. As hospitable of an event this may be, they are both unavoidably opposing forces in this world, and one day they may cross paths. If anything, this should also be seen as a time to learn just how she may combat a Quincy if the time ever comes. Though, such harrowing thinking isn't her style exactly, so it was for her benefit that such thoughts are put to the wayside for now. It's finally time for her to step on stage like so many before her and show what exactly a Shinigami can do.

Her opponent, however, looked unassuming. Ojo knows not to judge a book by its cover, but she's already imagining the multitude of ways this particular individual may fight. What's her name again? Ehefra? No doubt the other woman is making assumptions as well, gauging Ojo based on her stature and outward appearance. The Sueki is used to the discrimination. And, for that reason, Ojo only offered the slightest of grins, responding to Ehefra's bow with a bow of her own. Deeming it wholly fair to not greet her opponent before the fight, Ojo did not agree to the mutual handshake and took her position from her side of the arena, following Ehefra's example of preparing herself.

Hand on the large handle of her Zanpakuto, she used her other hand to hold onto its sheath. Would she have to face a ranged opponent? Physical? Maybe even trickery? It's never smart to make the first move without true confidence, but Ojo couldn't help but feel an urge to drive out everything possible from the Quincy. Her face scrunched with concentration; options were weighed in a matter of milliseconds, and an answer was found just as expediently, Ojo's body sprinting forward as soon as they were given the greenlight to begin their bout.

The first attack of the fight, a simple Iaijutsu technique. Ojo's frame moved quickly across the platform, stopping a mere two feet from Ehefra. Then, came her Zanpakuto, leaving its sheath, its trajectory aimed right for Ehefra's neck. The first thing one would notice is how unnaturally long the hilt of Ojo's Zanpakuto proved, meaning its length and area of effect boasted larger than the norm. The second thing one would notice is the sword's bluntness. It would not cut Ehefra, but it would leave her feeling disheveled, as if a bat had hit her upside the head. Maybe that is why Ojo could make such a normally decisive move without fear of killing her opponent.

Ehefra raised a brow slightly as the woman elected not to shake her hand, putting on a bit of a smirk and chuckling as she turned and got into position. Well, it only made sense she'd get someone like that. Just her luck. All the same, she took a nice, steady breath as the two faced eachother. Though it seemed that this little shinigami wasn't intent on keeping things idle. The instant the match started, they were on her.

Ah, she's fast. Ehefra's hand came up just barely in time for that blunt weapon to SLAM into her forearm! Her blut vene crackling along her skin as the sheer frce of that strike connected! She'd been way too caught off guard by the sudden speed to even think about trying to catch it, but all the same, she winced at the force behind the strike. This girl was pretty strong too! All the same, the force of the impact sent Ehefra skidding back as a soft hiss spilled from her lips, gritting her teeth and reaching into her pocket to retrieve a few empty cylinders. Ginto tubes. Reishi swarmed in around her as she eyed the woman thoughtfully, her mind ticking away as she eyes her opponent.

Wolke. Wolke. Gritz. Sprenger. ...Maybe a Heizan.
She smirked a little to herself as the tubes filled up and caps formed. "Five moves. Maybe six. And that's when this match will be over." She announced to Ojo casually, rolling her wrist where she'd been hit with the blade as she eyed Ojo. "Don't suppose you know what these are? Probably the first time you've seen them being prepped in the middle of a fight. Real interesting stuff if you're not familiar with Quincy moves." She clarified as reishi collected along the arm that had been struck and that band of coding slowly ran along the length of her arm. The Fabrication Spell of hers being used to condense it into thick reishi claws and plating along her arm. A bit of armor. Even if she'd taken that hit, there was no guarentee that that had been Ojo's full strength. Better safe than sorry.

Of course, Ehefra's guard was still up. She hardly expected this shinigami to just sit there while she talked, but in the event that she had, Ehefra would curl a finger at the woman, gesturing for her to go for another strike. Reminding herself that this wasn't life or death.No need to panic nuke the arena. She had this in the bag.