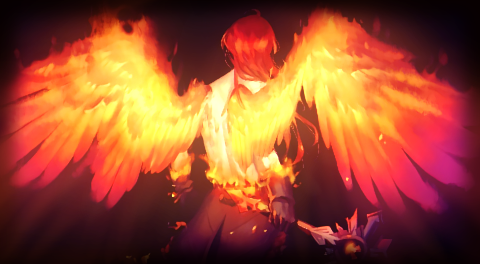 ALASTAIR EISFLUCH | Vollständig
If it was heat that Rio wanted, then it was heat that she would get. There was a pulse as Alastair's entire body began to glow, reishi being funnelled into every corner of him and then superheated, as he simply pressed himself forwards. There was no grand strategy to this, no masterful skill. That was not his style. If he met resistance, he simply chose to push himself beyond what he had done before.

The pain of heating himself up to such a degree was, frankly, quite immense. But there was a point at which the temperature was enough to overload his senses and thus surpass his own ability to process it, which was then being regenerated by the Unendliche Herz to maintain that balance without reducing him to ash. It was hardly what one might call an efficient process, but he didn't need to be efficient right now. He needed to be stronger.

Twisting his posture to better suit the struggle, struggling against the grip that Rio had around one of his arms, he craned back his free arm and would begin to rain down blow after blow on his opponent. He was not aiming for a specific location, but rather just focusing on the coverage as overheated blows would slam into that iron hide she seemed to possess. That was what it meant to be relentless, Alastair supposed. 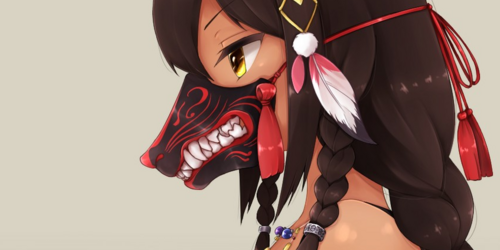 "It seems I've been blessed with an impressively resilient opponent today."

Flamelike reishi pulsed, his temperature increased. The radiant glow grew brighter still as the administrator maintained a semblance of an offensive approach. Slowly but surely, that fiery form was starting to wear away at her bold tenacity toward holding him in place. As she desired, he turned up the heat without batting an eye, remaining unfazed as he used his free arm to rain down a series of fiery strikes against her iron frame. Weighing her options here, Rio acknowledged that remaining in this position with limited techniques at her disposal would be a foolhardy approach if she desired victory. It'd be difficult to fight with burned palms, no?

It became a matter of pride versus practicality, but practicality won the day as Rio removed her burning palms, but not before executing a counter strike of her own. Bearing the full extent of those haphazard blows, Rio gripped his arm and aimed to swing it upward with enough force to disturb his balance. If her initial act proved successful, the Shihoin woman would quickly draw her fists backward in preparation for a follow-up attack. For the first time during this bout, she decided to put on a display for those who appreciated Hakuda, aiming to execute one of the art's more storied techniques, swinging her fists towards his abdomen.

Of course, since this was an exhibition match, Rio had exerted the technique with only half of it's overall force. He was quite the admirable opponent so far, and there was no intent on her part to cause him irreparable damage. At worse, it would only break his ribs, but no more than that. If he avoided that hit, Rio would remain within his direct atmosphere, wholly intent on keeping him within her range. It would be foolhardy to let a quincy fight at their ideal space, even if he proved himself every bit as capable to engage her on the close-quartered front.

Alastair’s response was curt and courteous both, hardly the type to chat during combat but also wanting to be respectful to his opponent after she had offered him such a compliment. She seemed good natured, at least, though her punches were anything but.

His flaming fists slammed home, each blow striking like a hammer against an anvil, but still she persisted. If he was going to beat her then he would have to use more than his hands, that was very much the realisation. But there was no time yet to act upon this, as she finally yielded her position and threw his own arm back at him. He shifted stances, his feet already twisting into a new position, but there was a half-step delay between him and his opponent.

Her double-fisted blow came crashing home, gliding past his guard with a practiced ease and finding that - despite the heat - there was less resistance to the Quincy’s frame than when she had struck before. It was fortunate that he was pivoting away, trying to turn to face her sideways, but the strike still carried enough power to crack bones as it slammed into Alastair’s side and launched him backwards a good few metres. There was little doubt to be had that the blow had done what was intended, and yet the Administrator was picking himself out of the dirt no sooner than he had landed. His face had contorted into a grimace, the sensation of his bones breaking was certainly an unusual one no matter how many times he experienced it, but his heart had not given up so neither would he.

Again, Rio surged forwards looking to capitalise upon her triumph, but Alastair was ready for her. With a single beat of his wings, he launched himself into the air. Falke reformed as he flew, his weapon now taking the form of a bastard sword, and he took it in both hands as he plummeted back down to deliver a thunderous overhead strike.

Rio offered only a warm smile in response to the courteous comment. She understood the nature of battle. There was hardly ever time to share conversation, no matter the situation. The Shihoin has already robbed the crowd of a brilliant display during the grapple period. Now, her intent is ever to make up for it and keep Alastair on his feet. Her double-fist strike crashes into his frame, sending him a few meters backward with Rio in hot pursuit. Satisfied as she was with her counter, there was no time to relent. Maintaining the offensive is imperative if she desires to emerge victorious.

With the radiant wings at his back, Rio can already tell that he is serious about his desire to win, a single look into that fiery gaze told her all she needed to know. Was it Letz Stil? Vollstandig? She isn't given much time for thought. Alastair is ready to meet her, to respond in kind for the bow he suffered a moment ago. He is no longer bound by the earth. There in the sky, the Shihoin woman discerns his blazing profile, reminiscent of phoenix, launching himself through the air. Like a meteor, he dove toward her, placing tremendous force behind that thunderous strike.

Rooting herself to the ground, a wide grin forms across her lips as she lifts her arms forward to meet his fiery blade head on. The bold act did not come without a consequence, however. His fiery spirit weapon was burning her arms after companying that thunderous strike. It was painful, no doubt, but the Shield of Shihoin title was one she wore with pride. She would not yield. In an attempt to press him back, Rio buried her feet into the pagoda. If it worked, she would utilize shunpo to separate herself from the fiery quincy. Her next thought, if she had earned her separation, would certainly be to activate her Shikai, but if Alastair pressed the offensive. She would remain where she was, aiming to push him back through brute strength.

ALASTAIR EISFLUCH | Vollständig
As the ground beneath them began to give way from the force of the impact, Alastair continued to press downward with his own force now as the momentum from his descent began to wane. There was little else to do as he simply continued to push his body to drive Rio into the ground if he had to. It certainly seemed unlikely that she would bend before she broke if he could even accomplish that yet.

Then, suddenly, that bulwark underneath him was gone and Alastair slammed into the pagoda himself with a resounding crash. Dropping to one knee, he propped his weight against the down-pointed sword and cast a glance over to his opponent. She was still standing and far from considering the prospect of defeat, it seemed.

The impact had been jarring for the Administrator, and Rio was given the space that she sought as he took a moment to compose himself. Picking himself up from the ground, his weapon again shifted form into a pair of shorter blades as he readied himself for the next stage of their bout. If she planned to finally reveal her Zanpakuto then he would have to be ready to go on the defensive again.

Earning a momentary reprieve, Rio turned toward Alastair as he picked himself up from the ground, manipulating his spirit weapon into a pair of blades. She could feel the adrenaline racing through every part of her body now. She remained unbent, but it wasn't as if his fierce strike hadn't created a burning wound across her arms. It still cut flesh, and that was certainly something he should be proud of. Yet, peering into those crimson eyes from afar, she suspected that he was not a man who reveled in moral victories. He was a competitor through and through. He had already donned his ultimate state of power. Now, she would meet him on equal terms. Brandishing her zanpakuto forward, Rio exhaled softly, uttering Tetsumaru's release phrase.

Following her command, one blade transmuted into four obsidian swords circling behind her rear. All four were held together by a chain, while the handled remained in the Shihoin's hand. Her eyes gazed towards the Pagoda surrounding them, a smirk caressing her lips. She stabbed three of them against the ground to collect material, pointing a single blade toward him. It was time to engage.

She invited the next move. To the crowd, such an approach might be the height of foolishness, but Rio was well aware of her Shikai's limited range. Part of her advantage was going to come down to getting him to soar in and strike her again. After all, the best offense was always a great defense.