Tier Harribel | The Shark of Hueco
Introductions need not be shared between the two, for they both already knew of one another. The only thing worth noting, mentally at least, proved the changes life has afforded them. Whether a blessing or a curse, one cannot simply ignore that they have changed. It is only natural that they have. Tier found no reason to point anything out, even as she neared the bleached princess. Humorous, is it not, the titles that some acquire, even if they'd rather remain peasants.

Tier is certain the other has noticed her by not, and in fashion, she simply stood there, waiting for a sign that conversation may begin. Whether many or few words are shared, their importance will hold the same value. Besides, Ichigo, in his own hubris, has brought them all together. It is only fair that they hold some wisp of say in this cruel world of theirs. 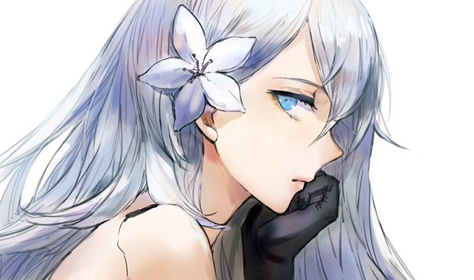 Inoue Orihime
"What is it, Harribel?"

She laid in the sand, unmoving and famished from laying here wearily. It was fortunate that her single-mindedness made details like that bearable albeit uncomfortable. It was nothing compared to the pain of her body begging to disperse in the breeze but held on because she told it to. There was no real time to pity herself though, all she could try and think about was how to achieve her wish.

If she could return everything to the way it was and save everyone then she could die at peace. What else was she supposed to do otherwise? There was nothing because to abandon that wish would mean to forfeit the thing which was keeping her alive.

Tier Harribel | The Shark of Hueco
"Two peas of a pod, I see," Tier responded, obviously hazing the woman for appearing in a similar manner as Ichigo.

Two lost souls, trying to find a way to save one another. Knowing somewhat of the giant heart that Orihime holds within her, Tier already knows that woman's mind is most likely wrapped with thoughts of how to save Ichigo. They're practically made for each other, whether romantically or through their friendship. It's almost enough to make her laugh. However, she simply moved closer, standing over the woman with that impassive stare of hers, always the stoic woman.

"I suggest something more proper than moping about, like making sure your friend doesn't start a bigger war than he already has."

She answered back staring at the black void that was the sky of Hueco Mundo. The monochrome landscape was almost serene compared to how the world had gone but this still place did carry that sense of a pond that wouldn't be disturbed with a ripple. No matter what this place would always return to its peaceful silence while the worlds around it would twist and bend.

They all never reached peace though.

"I just want to make everything right again."

If Ichigo's war served that purpose then she supported it but if his actions ended up in the same situation as his choices for the Vandenreich then she would not support it. That was all there was to it. A dream that she couldn't wake up from and an impossible goal.

Tier Harribel | The Shark of Hueco
"You're talking to a Hollow about meaningless, but I guess that matters little when your precious Ichigo's the same as. I cannot see the future, nor do I pretend to understand the powers at work. Ichigo is striving for something he believes capable of saving you, and he's willing to burn the world down for it. First it was to bring you back, now it's to revert whatever you've done to yourself. If anything, you are responsible for what he's become. There is no making everything right again."

Harribel's eyes narrowed. She's not good at dressing her words. The only thing she's ever been known for is keeping her thoughts to herself, but there are too many matters of importance for her to simply sit back and let things be as they are. However, she couldn't help but feel a pull towards something, a desire to put things into motion down a specific path. It is like a gnat buzzing in one's ear, an eternal static that simply won't disperse.

"There's only two options available: die and let Ichigo destroy the world or help him on his quest to save you. Maybe then, less people will have to suffer."

Inoue Orihime
How narrowminded. She didn't understand anything but the human was too weary to correct her. Ichigo might've been her world once upon a time but she had accepted a greater burden than just him after the war, watching everyone suffer and their world be destroyed, Ichigo couldn't stop it and when the time came he tried to shoulder it once again. It was sad how trying to shoulder burdens and protect everyone else was a deal that sold your being to powers outside of your control.

She muttered at the arrancar presenting her two options, a veiled ultimatum that she wouldn't meet. Whatever Ichigo wanted to do to save her should not be for her. It should be for everyone else who they failed, their loss gored her heart and left it rotting. If she could return them to their peaceful days that collapsed because of their shortcomings.

Tier Harribel | The Shark of Hueco
"Then you doom the world to handle his grief, but I cannot say I wholeheartedly care much for what happens to your world as long as that man leaves mine alone. You people, never happy with what you have until you lose it and have nothing to show for anything, but what should I have expected from a woman who refused using her abilities just because she disliked causing harm."

Tier turned away from Orihime then. The Arrancar didn't really have anything else to say. No one will ever enjoy life if they chose to take on too much to bear. Despite Tier's efforts to better Hueco Mundo, she already understood that she may fail, and she has become acceptive of the idea, but any change is better than none, and if all else fails, she will still have those close to her remaining. Then, there comes the very matter of losing them. Hmph... How could anyone think of saving the world when their friends suffer? Foolish.

"But, I know someone who'll save us all..." She found herself muttering, her head suddenly foggy as a strange noise in the back of her head caused her to still. Near their location, a garganta opening, depositing a being clad in silver plating. Its very presence seemed to bring Tier to a standstill as it neared Orihime and stood before the two with an overbearing presence.

Inoue Orihime
Interruptions. It is always something these days and everything Tier had said disappeared into oblivion in her mind. The singleminded rot-infested psyche of the white princess focused onto the newcomer, how familiar it was to that time that Ulquiorra had appeared in the Dangai to take her. Unfortunately, the princess then and the princess now were barely the same person. That person was pushed into a corner for the sake of her friends, friends that were all gone now.

No friends left to save. No friends she could trust to save her anymore. Though it wasn't really fair to trouble them with all with that in the first place. was it? So she willed herself to stand. She stood and faced the armoured individual with an intense glare that said everything it needed to.

Move aside. Begone. Do not obstruct me.

Things that didn't need to be said in words as she gave a scornful look, did this creature think it's display of reiatsu was impressive when she had seen titan's clash? She carried frustration, why? Was it Tier's words, the ghost of them haunting the back of her mind? Was it Ichigo's actions which had upheaved everything she had tried to do with the Vandenreich? Was it just frustration at herself for being in this situation?

The answer escaped her but it was fortunate in a sense. She didn't need that answer. Orihime just needed him to get out of her way and not waste her precious little time that was left.